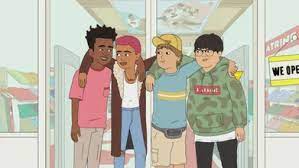 During the two decades I’ve lived in Los Angeles, the Fairfax District has undergone a transformation from being known primarily as the center of the city’s Jewish culture to being a lively, diverse and chaotic hub for retail pop-ups and so-called hypebeast capitalism.

It’s easy to be perplexed by and a little derisive of the area’s ubiquitous lines that sometimes wrap around multiple blocks and appear to lead into empty or abandoned storefronts. At the same time, you can respect the obvious passion of the people willing to queue up endlessly for the remote chance of copping a pair of sneakers or a T-shirt whose value will be appreciated mainly by the people joining them in the line or the strangers hitting “Like” on their Instagram post.

The culture is ephemeral, one week’s hottest brand becoming the next week’s historical relic, leaving these connoisseurs of clout ever chasing the next consumer high. In that respect, it’s a natural complement to streaming TV culture, and it isn’t surprising that streaming TV has been aggressively attempting to depict hypebeast culture — Netflix’s Sneakerheads and Quibi’s You Ain’t Got These being key examples — even though the target audience barely recognizes “TV” as a concept.

Amazon’s new animated comedy Fairfax is a fittingly ephemeral thing, more amusingly silly than deeply funny. It’s visually energetic, humorously frantic and populated by an exceptional voice cast. It’s much more invested in endless name-dropping than in being consistently substantive, but it does a good job of simultaneously respecting and mocking the world it’s depicting.

Our point-of-entry character is middle schooler Dale (Skyler Gisondo), who moves with his parents (Rob Delaney and Yvette Nicole Brown) to Los Angeles so that they can take over his uncle’s vape store, or something comparably flimsy that’s mentioned in the pilot and then is never again relevant. Dale is from Oregon and knows nothing about social media or hypebeast culture until he meets budding filmmaker Truman (Jaboukie Young-White), teenage activist Derica (Kiersey Clemons) and aspiring multihyphenate Benny (Peter S. Kim) in line for a new drop from Latrine, a creator of scarce tchotchkes overseen by the mysterious Hiroki Hassan (Billy Porter).

Making new friends and being indoctrinated into their gang sets Dale on an eight-episode adventure that includes Chernobyl-themed music festivals, corporately sponsored Instagram verification parties and a multi-episode homage to Charlie and the Chocolate Factory.

It’s easy to be exhausted and occasionally annoyed by the way Fairfax layers on the jargon and feels the need to explain the jargon to the uninitiated, who won’t have much interest in the show anyway. The series gets away with this in large part because of the decision by creators Matthew Hausfater, Aaron Buchsbaum and Teddy Riley to focus on a group of young protagonists fueled by insatiable enthusiasm more than anything else.

Fill in whatever your own juvenile obsessions might have been — baseball cards, video games, a newly encyclopedic passion for movies or books — and you can relate to these kids feeling like they’ve discovered the coolest thing in the world even if the show is refreshingly aware of the limits to that coolness. The Fairfax crew might be willing to do almost anything to get in on the next big Latrine drop or to hit the next huge social media milestone, but they still have to go to church or practice the cello or go on school community service trips overseen by a principal (Colton Dunn) who’s willing to let some discipline slide in exchange for an Instagram “follow.”

A lot of behavior that would be obnoxious in older characters (see Sneakerheads, but also several grating recent Netflix attempts at adult animation) becomes appealing when perpetrated by kids who still need rides from their parents (see HBO Max’s Ten Year Old Tom). This may be why some of Amazon’s publicity for the show — built on the service’s own clout-chasing and boasting about participation from brand Pizzaslime and characters designed by artist Somehoodlum — are obnoxious in press release form but reasonably charming onscreen.

The Titmouse animation cutely captures the general Fairfax geography, even if this is a fictionalized version of the neighborhood, one where you’ll want to pause to take in all the jokey business signs, many of which — “Oy Vape,” “Big & Tallis” — nod to the area’s Jewish roots. Certain episodes, like the music festival half-hour, over-rely on disposable reference humor, while better installments lean more into character-driven comedy, among them several storylines involving Benny and his family that are written and performed in Korean. Early investment in character will, as shows like BoJack Horseman and Big Mouth have proven, give you a lot of latitude later for meta gags. I wish Fairfax had steered into that character-based focus a bit more in early episodes, but by the end of the season I saw real potential there.

The voice cast, full of precision-comedy-delivering talents, is capable of providing punchlines or heart as required. Kim, Young-White, Clemons and Gisondo are likable, and supporting work is provided by an outrageously strong group of performers, including Pamela Adlon as a burnt-out waitress at the Canter’s-esque deli Schwimmer’s and Timothy Simons as a Latrine henchman with fashion aspirations of his own. The community service episode, set at a retirement home, features the likes of Henry Winkler, Elliott Gould and Garrett Morris, while Shania Twain and David Strathairn are among the standout voices in the festival episode. After eight episodes, I still don’t get the point of the talking pigeons voiced by J.B. Smoove and John Leguizamo, but perhaps they’ll be somebody else’s favorites.

The first episode of Fairfax should be enough for most viewers to decide whether they find this world amusing or designed mostly to make people feel old. I found enough of the former in the uneven pilot to carry me through a typical-for-the-genre up-and-down season with affection for these characters and their commitment to this silliness. I apologize if a tempered endorsement from an industry trade TV critic means that Fairfax is already uncool before it even premieres.