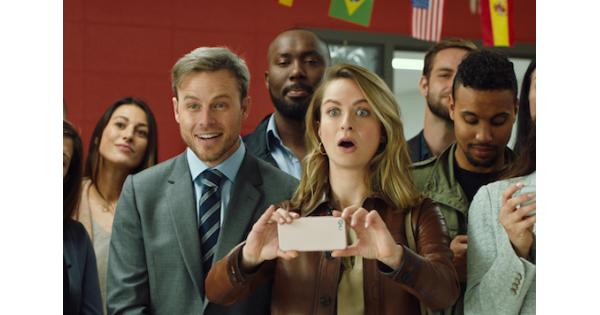 Martin (Louis Morissette) and Marie Soleil (Catherine Chabot) seem to have it all; a beautiful house, an active sex life, and a glossy social media profile to show off their family and alllll their accomplishments. Despite appearances, however, their son, Mathis, has behavioral issues and struggles with his speech development, and Martin’s teenage daughter from another marriage, Rose (Emilie Bierre), while getting good grades and busy with extracurriculars, is struggling with her mental health. While Martin initially beams with pride when he sees Rose’s high scores in school, it all comes crashing down when it’s discovered that she’s been cheating on tests and self-medicating with cannabis. Rose is suspended from school until finals, and continues to clash with her father at home.

While confused about how to best move forward with Rose – Martin initially scoffs when she’s diagnosed with depression and anxiety – he’s also worrying about his performance at work. He also doesn’t put much (if any) effort into Mathis, leaving Marie alone in more ways than one. As the stakes get higher at home and issues across the board continue to go unresolved, Martin must make the decision to step up and learn to be a better husband and father.

Despite the story focusing a little more on Martin’s journey as a father, The Guide to the Perfect Family really belongs to Emilie Bierre, who shines as Rose. As struggling teen Rose, Bierre gives off major Kaitlyn Dever vibes, easily getting viewers on board with her emotional journey. The character easily could have fallen into the tired category of angsty teen daughters – and early in the film, I thought she might – but thanks to Bierre’s performance and some decent writing, Rose is able to subvert expectations and bring some real emotional weight to the film.

The Guide to the Perfect Family wants to be one movie and winds up being another one entirely. At the beginning, the intentions seem fairly clear; we get a glimpse of the social media representation versus reality in the Dubois family, a group of average people who seem to be holding it together when we first meet them. The performances are solid enough – and let’s be honest, Louis Morissette is a total DILF – but The Guide to the Perfect Family loses its focuses at a rapid rate. The title stops making sense about halfway through the film, and the entire social media-based premise might well have never existed at all. What we get instead is more of a family drama, the tale of a depressed, anxious teen girl under too much pressure and the cost not listening to our children can have.

The Rose and Martin plot alone is enough to be the heart of its own film, not one of a handful of stories smushed into one movie. The Guide to the Perfect family feels unfocused and confused about what kind of film it is and what story it’s really telling, and the understated, loose ending is bound to frustrate some viewers. While I admired the choice to end the film the way it does, it doesn’t make sense for *this* film in particular; it feels more suited to a quiet family drama, not whatever The Guide to the Perfect Family is trying to be.