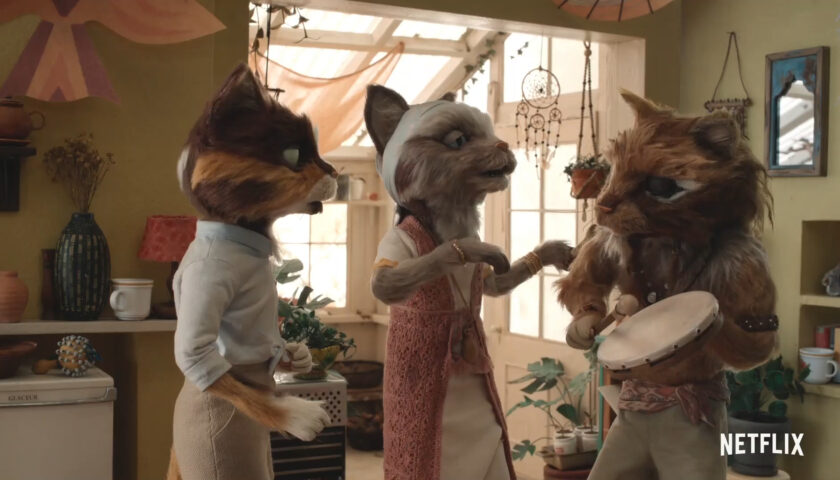 Netflix’s stop-motion anthology series The House depicts its titular structure in three vastly different contexts. The first time we see it, the house is newly built high atop a forest hill overlooking all that surrounds it. Later, the house can be seen squashed into the middle of a city street, and, finally, it’s the only building in sight that remains above ground in a world flooded as far as the eye can see. Each story is directed by different independent animators, and though all of the roughly half-hour segments are handsomely made, the series as a whole lacks a sturdy foundation.

In the first story, set in the 1800s, an impoverished father (Matthew Goode) makes a deal in the dead of night with a mysterious architect. Spurred by humiliation over his unimpressive home, he agrees to move his family into a lavish hilltop building that’s yet to be built. Upon arrival, the family finds the place fully furnished and with food provided free of charge. The deal is clearly too good to be true, and we’re primed for disaster from the start through directors Emma De Swaef and Marc James Roels’s distinctly unsettling visual style.

Like their Belgian colonialism farce This Magnificent Cake!, De Swaef and Roels use humanoid figures made from felt that, when seen up close, share an unsettlingly hairy texture with the environments they inhabit. Though their body proportions are relatively naturalistic, the characters all have bulbous heads with discolored spots and features that are squashed into the center. But while there are a few memorably strange images, like the architect’s eyeballs imposed over the house’s windows, the story itself takes the most expected route, leaning on self-consciously spooky touches like menacing laughter and ominous music cues.

Directed by Niki Lindroth von Bahr, the second story trades the previous segment’s distinctive felt figures for a more traditional stop-motion style that places anthropomorphic rodents in a modern, ostensibly London setting. Here, a desperate property developer (Jarvis Cocker) tries to flip the strange house that’s come into his possession only to find himself dealing with an infestation of dust beetles and, after a disastrous showing, a bizarre couple who refuses to leave. In its portrait of a character losing his grip on reality, von Bahr’s segment likewise fails to reach the heights of darkness and oddity that the anthology as a whole is clearly aiming for, but it does supply a few gross images amid an impressively detailed setting.

Where the first two stories brim with a potential that never quite feels fully realized, the third, directed by Paloma Baeza, is an outright dud that’s not much of a stylistic change from von Bahr’s segment. The main character is a disgruntled landlady (Susan Wokoma) who wants to renovate her house but doesn’t have the money to do so, and she spends much of the story fussing over tenants who only pay her in fish and obsidian crystals. Less driven by distinctive visuals, it favors chatty characters who are built around mawkish sentimentality and an overwrought metaphor about learning to let things go. The segment only emphasizes how much The House’s technical craft outstrips the stories that it tells.