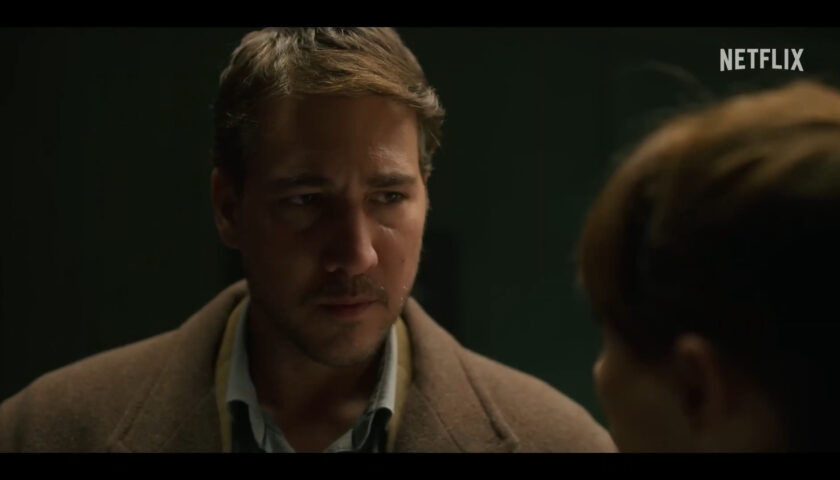 Simón Lago (Luis Callejo) aka “The Alligator,” is a notorious serial killer that has been hiding in plain sight and has eluded capture for years. He’s also sadistic, piling dirt on a victim who wakes up inside that garbage bag and tries to get out, or letting a supermarket cashier’s recently killed body sit in his living room while he enjoys a glass of wine on Christmas Eve in his well-appointed home. But he gets a call that he’s going to be captured; a plan is in place to spring him, however. So when SWAT teams come to arrest him, he goes willingly.

Instead of going to a max security prison, though, he’s sent to Monte Baruca, a psychiatric prison not equipped to handle him. He knows this is part of the plan. The warden, Hugo Roca (Alberto Ammann), is called from a Christmas Eve dinner with his three kids to come to the prison to handle this special case; his oldest, Laura (Maria Caballero), goes to stay with her mom, but he takes his younger son and daughter with him. In the meantime, a crack assault team led by a man named Lennon (Jose Luis Garcia Perez) is gathering and making their way to the prison.

Lago tells Hugo that they’re in for a very long night, and that’s definitely the case when Lennon’s team cuts the power and cell access. They station themselves outside the block where Leon is being held and demand that Hugo hand him over; if he does so, they’ll leave and nothing will happen. Hugo has incentive to do that, because before the assault team gets there, Laura sends a video message that she’s been taken and will be killed if she hands Lago over. So, despite knowing he’ll be in for a siege, Hugo refuses to hand Lago over to Lennon’s men, making a simple operation much more complicated for everyone.

The Longest Night is one of those shows that has a lot going on, and it needs to have those multiple threads given the nature of the series’ plot. All of the events will take place over Christmas Eve night, as Hugo and the rest of the personnel at Monte Baruca wait for authorities retrieve Lago to get him arraigned.

If Lennon’s men making their way into the prison to perform what Lago says “is not a jailbreak” isn’t enough for Hugo to deal with, he also has his children holed up in his office. Inmates like the prosthetic-limbed Cherokee (Daniel Albaladejo), work release candidate Manuela Munoz (Cecilia Freire) and unhinged newer inmate Nuria (Lucia Diez) start to get frustrated with the lack of information and their general treatment. The people who want Lago sprung want him sprung for a reason, but we’re not quite sure what that is. And a new corrections officer, Macarena Montes (Sabela Aran), starts to question Hugo’s decisions.

Hugo is not holding on to Lago for any other reason than to make sure Laura stays alive. That will come into play at some point; we just wonder how long we’ll get teased about Laura’s whereabouts while Hugo tries to figure things out.

There are also a few things that feel superfluous now but may come into play later on, like his secret relationship with one of the prison’s psychiatrists, Elisa Montero (Barbara Goenaga), and their fundamental disagreement about whether they should be treated like patients or inmates. Also, the lead correction officer, Bastos (Xabier Deive), beats up Cherokee and other inmates, and it seems Hugo looks the other way.

Might it be too much? Sure. But in the right hands, and a bit of creative time fudging, this concept can work. It would be pretty padded and boring otherwise if all we had to do was wait to see how the siege played out. With all of the other things going on inside and outside the prison, The Longest Night should be able to fill its 6 episode season with enough action to make the time go by quickly.