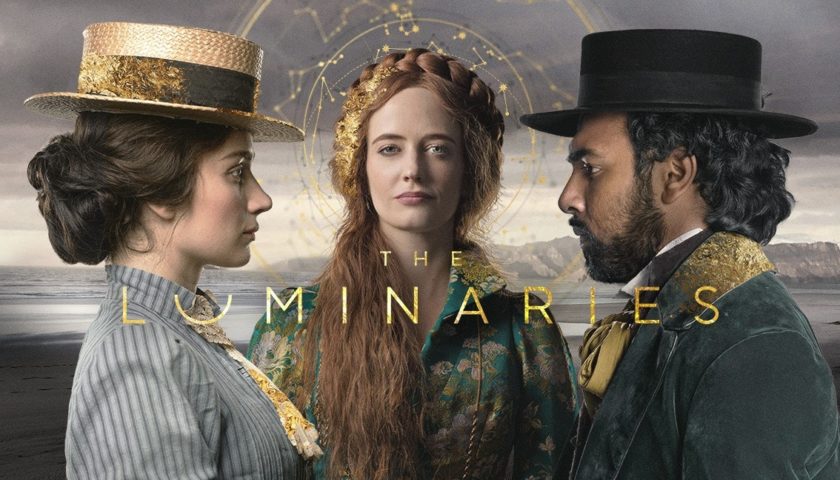 Those of us with NZTV “On Demand” have been able to binge The Luminaries.

Yes, I have read the book. When I have read the original work, I believe in taking care not to be overly critical of film, or in this case, mini-series, adaptions, as that is a difficult process. That said, I found this adaption simply awful even in that forgiving context.

The best aspect of the novel, is a technical one: a somewhat fresh structure within the otherwise standard and well trod genre of romance novel, or combined romance+crime-drama novel. Ingenious? No. Fresh? Yes. Specifically the central 12 astrological symbol based men whose aspects are the core part of the story telling mechanism of the novel.

Sadly the mini-series adaption keeps the overly worn romance/crime drama tropes, and there are just an endless stream of them, and completely glosses over the clever technical aspects of the original work. In the end what we have is a standard soap opera. It is profoundly dumbed down to the point of being an insult to the audience; who the makers and adapters must think are generally idiots. It is not as if some of the complexity, nuance, are gone — they all are gone.

The acting, cinematography and certainly the art direction, are above average. But the narrative structure is for the simple minded, with all the inventiveness it seems carefully removed. The dialogue is has had every element of irony, subtlety removed. The most interesting book characters are turned into shallow two dimensional cut-outs. One character, who in the novel is a essentially a catalyzing impetus, bizarrely becomes the lead character in the adaption,. Yet she is given no compelling, or interesting story. Also the novel refreshingly did not moralize in a heavy handed way. The bigotry for example are presented matter of fact, which is effective. Yet the adaption is patently moralizing, and hamfisted at it as well. It is just a cheap shot to be saying — “look at this! 1860’s era New Zealand setters had bigoted views!” Really? Who on the globe did not at that time.”

In the end this is a hollow and superficial viewing experience. We are not in the 1970s or 1980’s television era, but in the golden age of series and limited series work. The age of Fargo, True Detective, Chernobyl, Rome, Boardwalk Empire, House of Cards, and a litany of smart and very well written work.

Sadly, “The Luminaries” mini-series adaption, specifically the plot and screen writing, takes us back to the junk age of television.