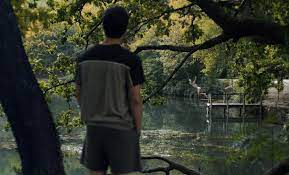 The Man with the Answers 2021 Movie Review Poster Trailer Online

The Man with the Answers is a cute little road movie about Viktoras, an ex-championship diver who reconsiders his life after his grandmother passes away. He decides then to travel to Germany to reunite with his mother, whom he has not seen for more than 6 years. On the trip, he meets Mathias, a young man as enigmatic as he is peculiar. Mathias’ cheekiness and upbeat attitude will clash with Viktoras who is more shy and square, but we all know, especially when it comes to romantic films, that opposites will eventually attract.

Simple, unpretentious and utterly adorable, Stelios Kammitsis’s gay drama is not going to revolutionise the future of LGBTQ-themed cinema. But that’s where its charm lies. After watching so many movies about intolerance and unrequited loves, it is nice to see every once in a while a competently made lightweight film where its gay characters do not wallow in their own misery.

Maybe the problem with The Man with the Answers is that it doesn’t amount to much. The lack of conflict is not always an issue, but somehow Stelios Kammitsis believes it is. The fight between Viktoras and Matthias near the end, for example, feels forced as if the writer needed some kind of dispute to add gravitas to their relationship.

Kammitsis’s delicate eye for detail, assured sense of pace and avoidance of sentimentalism makes The Man with the Answer a pleasant viewing. But the film would never have worked without the presence of its two lead actors. Vasilis Magouliotis as Viktoras is so adorable you’ll want to smother him with kisses while Anton Weil plays his manic-pixie-dream-boy type of character with admirable restraint and, thus, avoids making Mathias an annoying guy.

For a movie with almost no plot, its 80-minute running time feels about right. But after getting to know both Viktoras and Mathias, I could’ve spent another three hours with these guys.

The Man with the Answers 2021 Movie Review Poster Trailer Online