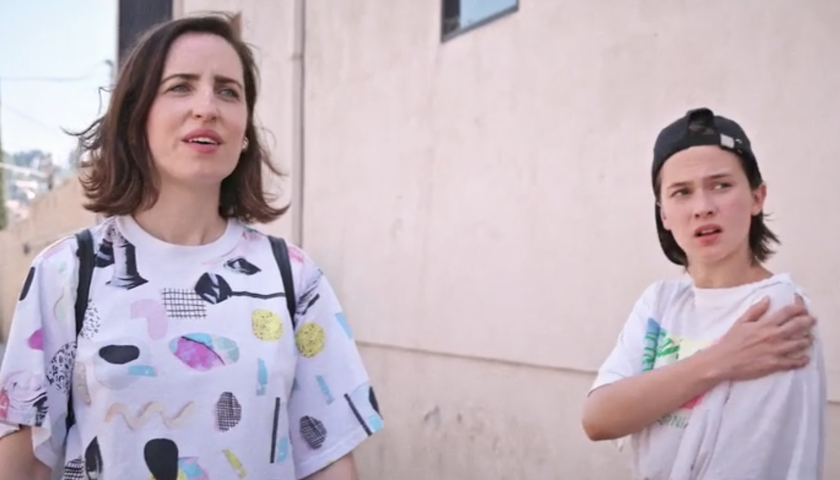 This is how it ends: An off-screen bang, and one hell of an amiable ramble around a fraying Los Angeles. As the latest in the growing ranks of pandemic-shot movies that are only kinda about the pandemic, Daryl Wein and Zoe Lister-Jones’ “How It Ends” offers the unexpected: Hope. Picking up long after Earth and its inhabitants reckoned with Armageddon — details of which are hashed out later— the pair’s latest dramedy opens on the planet’s final day.

Liza (Lister-Jones) is totally okay with that, and as the sun rises on a silent, calm LA, she’s still snoozing in bed. It’s the end of the world and she feels fine… well, the first indication that Liza isn’t OK with the end is the appearance of a sprightly young pal (a winning Cailee Spaeny). She’s eager to get the duo moving to purchase, like, a lot of drugs to get them through the last night on Earth.

Later, the reality of Spaeny’s role revealed: She’s “metaphysical,” Liza bemoans, a literal manifestation of Liza’s own younger self (“a YS!,” Spaeny happily exclaims). Soon, others will be able to see YS too, pushing Liza closer to the one thing she needs to do before it’s over: come to terms with herself. On the last day on Earth, the film wonders, perhaps the only person you need to spend quality time with is yourself. It’s a lesson Liza will have to learn the hard way.

Lister-Jones has the precise bearing and tone to ground something this wacky and outsized, and she approaches the part with her usual blithe charm. As Liza and the YS venture into a mostly empty world, they encounter a bizarre array of people, from Nick Kroll as a drug-hoarding weirdo to Logan Marshall Green as a puppy-toting past paramour who starts drawing out Liza’s well-hidden discomfort.

Liza’s life has been, as she tells it, a “series of regret after regret after regret.” Why not turn things around on this one last night? Liza and the YS start hoofing it around Los Angeles (the film shot all over the city, from the Eastside to the beach and back again) in hopes of making serious amends with important people in Liza’s life before everyone is snuffed out by a giant fireball. Characters, both new and seminal in Liza’s life, fall into frame; others linger on the margins, including Glenn Howerton and Whitney Cummings in amusing roles, and Bradley Whitford and Helen Hunt in delightfully surprising ones.

That’s a taste of the star power Wein and Lister-Jones rounded up (safely; press notes detail the precautions taken). “How It Ends” also includes appearances from Olivia Wilde (as an oddly relatable future-seeing empath) and Pauly Shore (sort of playing Pauly Shore, but hey, he’s nice to see). The rambling nature of the film suits pop-up appearances, and by the time Liza falls in with Charlie Day and Mary Elizabeth Ellis, it seems like this shaggy journey could just keep rolling. However, as Liza approaches nightfall, a very real melancholy creeps into the zippy proceedings.

The film’s ballast is Liza and her own Younger Self. Lister-Jones and Spaeny previously worked together on “The Craft,” and their bond lends them a kind of lived-in chemistry. As the two Lizas trek around the silent city, moments of grace and humor unfold with ease. If this is what Armageddon looks like, maybe the end of everything isn’t so bad. Maybe the next go-round will be better, one of Liza’s pals wonders, and “How It Ends” makes the refreshing argument that he’s probably right.

The pandemic spawned plenty of run-and-gun projects. Many of them chart the circumstances that made them possible, but Wein and Lister-Jones’ winsome spin on a well-trod concept is as fresh and funny as anything inspired by the last few wretched months. Hope, it seems, is always in short supply, and how strange to find it in a film about a world coming to an end. Or, maybe, a beginning.