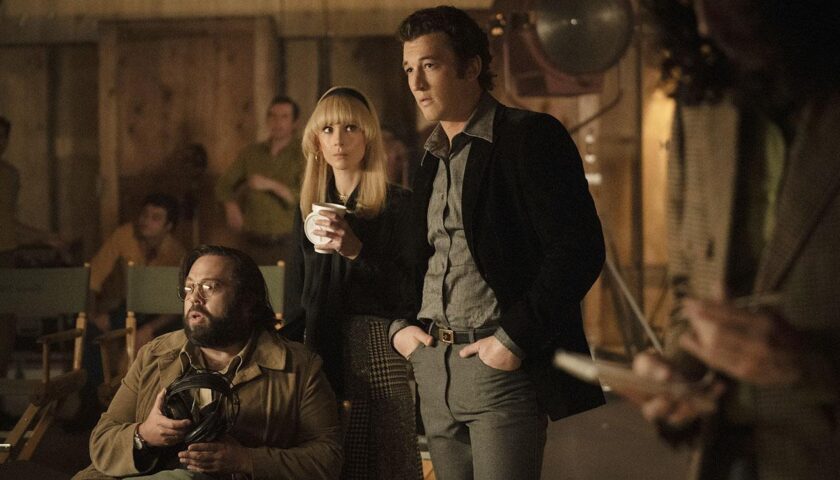 After a single episode, I’m all in. It’s the perfect mix of great acting, good story, and a fun script. I was dubious about this when I saw the trailer, but my doubts were gone almost from the beginning of episode one. The movie was larger than life, so a series about how the film came to be was definitely worth a shot.

I may come back and change this initial euphoria, but for now, this is one of the best things I’ve seen in a long while. I mean, come on! It’s a series about the making of the most epic gangster movie and one of the best films ever made, and it has gangsters in it. What more could anyone want?

The scenes with Coppola and Mario Puzo are genius. They both make the process of writing look exciting, positively thrilling like I’ve never seen before.

One complaint, and it’s major. There are WAY too many scenes shot in almost complete darkness. I am so fed up with this technique and for the life of me, I don’t understand why directors think shooting in the dark is so cool. Just about every scene is shot in candlelight, an unlit room with light shining through a curtained window, a club or office as dark as a cave with visibility at about ten feet. If there is daylight, it’s only to show characters walking into ill-lit rooms, or shadows playing a prominent role. Puzo and his wife sit in a dark kitchen. Couldn’t he pay the electric bill? Turn on a light!

If it were available, I would have watched the entire series in one night. This could be the best thing ever on TV. I almost want to tell viewers to wait until it’s all available before beginning the series so as not to have the anguish of waiting for the next installment in what could be the best TV series ever-no kidding

If you would have told me beforehand that Giovani Ribisi plays Joe Colombo, I would have laughed, or at least been a bit skeptical. He’s a stroke of pure brilliance in a series that is loaded with talent and great performances. I had a difficult time recognizing many of the actors because they were so far from anything they’d done before.

Another complaint I have is that we have to wait around until the end of June to see this through to the conclusion. I want it now! This reminds me of a true story. Back in about 1989, a group of friends were sitting in my living room ready to go out for the night when The Godfather came on the TV on some network station. We all promised that we’d go out after watching a few scenes. I mean, we’d all seen it a million times already. Well over an hour later, when Michael goes into the bathroom and comes out with the pistol, there was a message on the screen: To Be Continued Tomorrow.

We all said to heck with that, and someone went out to the video store to rent a copy so we could finish watching it for the 1,000,001 time. I don’t remember what happened after that, but we probably went out to a bar and talked about the movie for the millionth time.