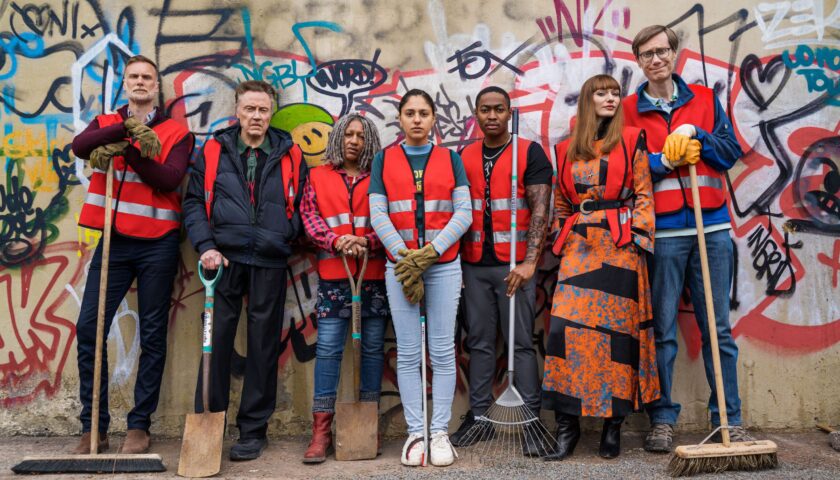 The creative team is consistently solid – co-creator Stephen Merchant has got, let’s say, a “pretty good” track record, with television monoliths like The Office and Extras. Somehow, they’d even managed to nab Christopher-freakin-Walken to star in a little British show, truly an indicator that we’re in a golden age of television. Still, the trailers, in BBC style, were vague, not giving an indication of what this thing was. Most marketing focused on a Bristol-based community service programme and the big Hollywood A-lister. It looked a little generic and not particularly interesting.

It was a great surprise then, that not only is this more than a solid piece of television, but also a show with a real depth to its characters and something nuanced to say. It may quite possibly be one of the best things on British telly this year.

To backtrack: The Outlaws (or as it was previously known for most of its production, The Offenders) is about a disparate bunch of convicts navigating relationships with one another while on Community Payback in Bristol. They’re brought together by the discovery of a mysterious bag of drug money, which may or may not be connected to one of their group. What sounds like quite a serious concept is subverted by Merchant’s excellent sense of British deadpan comedy. That isn’t to say it isn’t scary or tense when it needs to be. In fact, some of the “action” sequences in episode one alone are more impactful than most of Marvel’s output this year. The trick is making us care deeply about these multifaceted characters.

We focus on Rani (Rhianne Barreto) a young girl from a Sri Lankan/Polish background, studying to get into Oxford (be it more by the will of her parents). She gets caught shoplifting in a frustrated attempt to inject some excitement into her life. Barreto brings a lovable, relatable teenage awkwardness to the part. You can tell she’s still trying to find her place in this world and her attempts to do right by herself are utterly endearing. While on Community Payback, she’s introduced to Christian (Gamba Cole), angry activist Myrna (Clare Perkins), bigoted businessman John (Darren Boyd), bumbling lawyer Greg (Merchant), internet posh-girl Lady Gabby (Eleanor Tomlinson), as well as American sleezer Frank (Walken) and assertive-yet-foolhardy supervisor Diana (played by England’s answer to Melissa McCarthy, Jessica Gunning).

The show navigates its huge personalities by pairing people off into unlikely combinations. You get the racist teaming up with the liberal, the internet supermodel with the awkward attorney, and the sheltered Rani with the worldly Christian. Cole and Barreto have wonderful chemistry with one another, their scenes have a real “young love” manner that generates warmth and affection for these characters.

But the ultimate example of this, which speaks to the larger success of the show, is the relationship between John and Myrna. Boyd and Perkins expertly communicate opposing viewpoints on the world without vilifying or lauding them either. Both the conservative and the radical liberal think the way they do because of specific contexts, and the nuance of the exploration allows for examinations of the larger complexities of the world. It shows the need for symbiosis; true change, yes, needs shouting and activism, but also requires empathy, and seeing people as human beings, however flawed. It gives the show an excellent platform to touch on contemporary issues, such as last years’ toppling of Edward Colston’s statue in Bristol, in a way that never loses track of the story it’s trying to tell.

On that note, Bristol as a place has such a presence in the series, from the towering Clifton Suspension Bridge to the graffiti seeping into every shot (a nod to local artist Banksy, whose work actually makes an appearance in the final episode). It may seem initially odd to set a thriller/crime story in the West Country, but the grit of the city that radiates throughout the show makes it work. As Merchant jokes, Bristol is famous for three things: Wallace, Gromit, and crack.

We haven’t really got round to the show’s biggest star (and selling point), Christopher Walken. Ironically, for a show all about togetherness and connectivity, he feels quite separate from the rest of the cast. There are attempts to give him an engaging backstory, with a complex family relationship, but it doesn’t quite ring as true as the other characters. This potentially speaks to the practicalities of working with such a big name. An actor of his calibre (and cost) probably wasn’t available for long, which would explain why his scenes feel streamlined, to get the most bang for their buck.

Maybe this is an issue to be improved on in the already-shot season two or beyond (bar any more HGV Bristol harbour incidents), but ultimately, despite a few dangling threads, this is an ambitious, meaningful, heart-filled show. It’s a true testament to UK talent and its successes are amazing and wonderfully surprising.