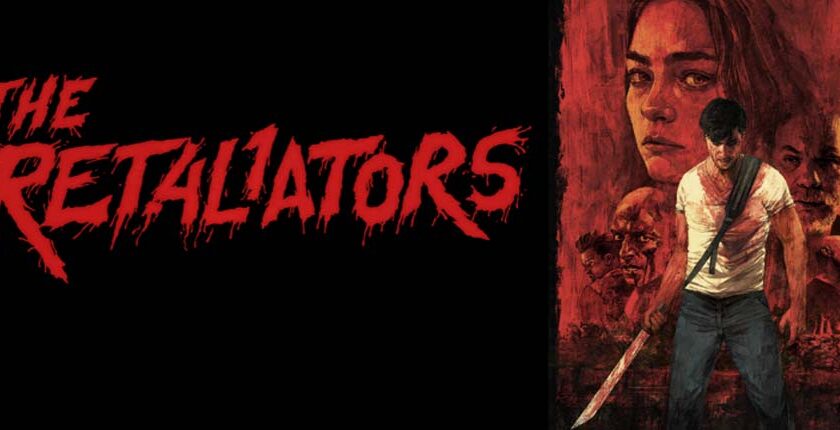 There’s A LOT going on in The Retaliators and that may be a bit of an understatement. Almost feeling like a combination of five different movies, this feels like a bit of a juggling act from the jump. But if you’re a fan of blood and gore, you’re sure to find some thrills from this little independent venture.

I’ve enjoyed Michael Lombardi since his days as Probie on FX’s Rescue Me, so I pleasantly saw him take the lead here. He stars as a pastor who loses his daughter to a devious killer. Oh, and that killer is also a part of this gang, causing a ruckus with another group. There’s also a Jigsaw-like figure who kidnaps said killer and decides he will punish him. As I said, there’s A LOT going on here.

Joseph Gatt (who you probably remember as a Thenn from Game of Thrones) plays the main villain, and he’s downright terrifying. Some of his line delivery is a little stiff, but they make him feel like a force of nature. The opening kill is one of the most brutal of the entire movie and sets up his character well. Whenever a film can make the bad guy so unlikeable, I consider that to be a huge positive.

There are several instances where The Retaliators practically becomes a music video with its very loud, radio-friendly music blaring. I enjoyed some of the songs but every time it happened, and it took me out of the movie a bit. And that’s not even mentioning the strange Five Finger Death Punch church concert. This brings me to my next point: this film’s weird relationship with religion. I’m not sure if this is a former Christian confronting their faith on film or if this is genuinely meant to be a Christian production. Because either way, the messaging is weird.

Unfortunately, despite its intriguing opening, it never manages to be anything more than mediocre. There are too many ideas here, and it doesn’t fully flesh out any of them. They have these insane zombie-like creatures that feel like nothing more than a way to get some more carnage on screen. I’m not complaining about the gore because when things get wet, they get VERY bloody. If you are a gorehound, you’re bound to enjoy those moments. But it takes so long for that to come that it feels like a bit of a slog to get there.

Then there’s production, which feels decidedly cheap. While this isn’t a massive problem regarding horror, it means that some of the decisions make little sense and are mostly there because the movie needs it to move the story along. In fact, that’s what the entire storyline with Marc Menchaca‘s Jed feels like. A poor way to explain both the weird Jigsaw-like character and the opening tease.

Ultimately, The Retaliators doesn’t manage to bring any new ideas to the revenge genre. It’s almost hard to call this a revenge film because Bishop is practically forced to do these things. It’s a far cry from Frank Castle taking action and being a badass. When he finally breaks out of his shell, it feels more out of obligation than rage. So while there’s definitely enough blood to satisfy gorehounds, the characters and story lack excitement. Whether or not you’ll enjoy this depends entirely on how easily you can shut your brain off and just enjoy.