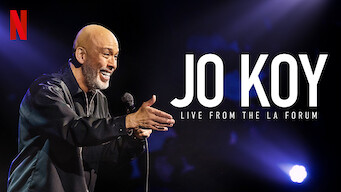 Jo Koy has filmed stand-up specials in Seattle, Hawaii, and the Philippines, but nothing matches the massiveness of headlining The Forum in Inglewood, south of Los Angeles. Koy feels and cherishes that energy, along with the two-year wait to do the gig, filling the arena with jokes about the pandemic, living with sleep apnea, parenting his son, and expressing the need to tell stories in his mom’s voice. Accent and all.

Perhaps the most memorable and impactful act outs come at the end of his hour-plus, when he decides he needs us to remember what he has been through just since 2016, when he sold his first special to Netflix after not only paying to produce it, but also doing much of the post-production work himself. Despite standing in front of a packed arena, or perhaps as a show of strength for standing there to deliver his fourth Netflix special, Koy feels determined to remind everyone that the streaming giant kept telling him no just six years earlier. He offers a brief apology (“I’m sorry I turned this into a TED talk”) but then, more assuredly, makes the point that not everyone gets “a fair shake” from show business, or the world, even.

He singles out a moment from that time period, where he prepared a TV routine to promote Live From Seattle, only to have an unnamed show/producer ask him to drop the Filipino accent he uses to impersonate his mother. “You don’t want her voice to be heard on the show?” Koy asks now. “Did Jeff Foxworthy get the same note?…Because he has an accent. He’s an American. He speaks English.”

All of which puts Koy’s second and third Netflix specials into deeper context. He chose to film in Hawaii and in the Philippines precisely to showcase the culture and voices of Pacific Islanders. His Tommy Lee story is not merely a name-drop, but more of a chance to promote tourism to the Philippines, as well as his own Netflix pitch for an Emmy-worthy docudrama about Arnel Pineda becoming the lead singer of Journey. Heck, since the 2012 documentary Don’t Stop Believin’: Everyman’s Journey doesn’t appear to be streaming anywhere right now, why not green-light Koy’s series.