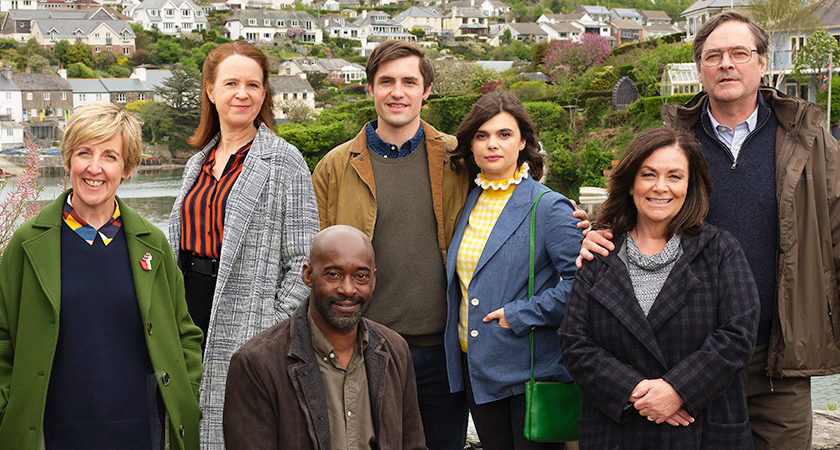 I think the writing is beautiful. The dialogue flows nicely and there are some very clever details in it that many writers would ordinarily miss. I would be interested to see other projects by this writer and how he develops, as there’s such warmth and heart in the writing that can’t be learned, you just have to HAVE it, you know?

Now I have to say that the actors that are good are VERY good. Dawn French is fabulous in the title role. Mark Heap is deliciously awkward in his role as Maggie’s husband. Julie Hesmondalgh is adorable and warm as Maggie’s best friend and her love interest played by Patrick Robinson is brilliantly natural. Kerry Howard does a terrific job with the west country accent, although I assume she may originally be from the region. Laurie Kynastan is a new face to me, but nonetheless his acting ability is something very special and I imagine he’s one to watch in the future.

However some of the other casting choices are nothing short of appalling. Worst of all has to be the supposed Polish father and daughter. If Tomi May isn’t putting on an accent, then he’s just a terrible actor and should never have been cast. Emily Reid is even worse, neither looking nor sounding Polish and having zero acting ability or charm. As a Polish person myself, I feel very offended by these choices, as we’re crying out for decent representation, but get slapped in the face with these. Please sack whoever cast them!

I also feel the casting of Rocco Padden as Kerry Howard’s son was a poor choice. The boy seems streets behind the acting level of his classmate, Jamie Talbot (who isn’t even listed in the cast in many sources), who is superb with his expressions and naturally funny delivery. It’s a real shame and maybe Rocco Padden will improve someday, but there’s no point in casting a child that can’t act until they’ve grown in their ability as it will just ruin his career before it’s started.

I don’t think Holly Edwin fits very well with Laurie Kynastan. They simply look wrong as a couple, which again feels like a mistake by casting. Maybe Holly Edwin has great ability, but it is rather distracting when a couple just LOOK wrong, you know?

I know these are petty and minor niggles too, but I would sack whoever was in charge of wardrobe for basically either just getting completely carried away, or deliberately trying to draw attention to them in a sort of “Look what I did everyone!” way, for example Dawn French’s hat and especially Gwyneth Keyworth’s revolting outfits. The make up team should also have a word with themselves for seemingly applying a thick layer of cement to Kerry Howard’s face, which was unflattering, ageing and very distracting.

All in all, a very enjoyable watch, but please stop distracting from the lovely script with these silly wardrobe/make up choices and poor casting decisions. You’re lucky you have some truly wondeful actors and actresses to balance it out though.