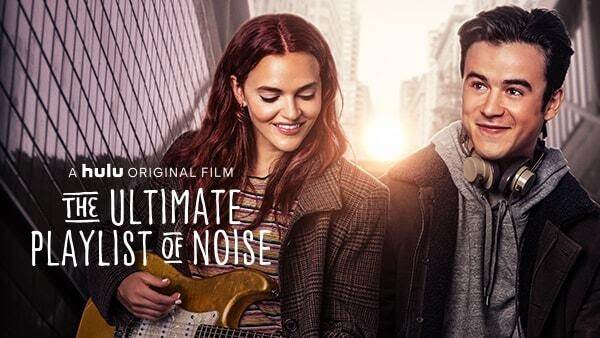 There’s a genre of literature, rife with fear and dismay, that’s more steeped in sinister fate than the novels of Thomas Hardy, more flecked with cruelty than the bad-dream collages of William Burroughs. It’s so infused with a sense of life’s unfairness that merely to read it is to stalk the darkness.

I’m talking, of course, about YA fiction.

Someday, somebody will write an academic thesis — maybe it’s already been done — about why so many YA tales hinge on events of grandiose misfortune. Fatal cases of cancer, cataclysmic car accidents, or, in the case of “The Ultimate Playlist of Noise,” a sweet handsome menschy suburban teenager, Marcus Lund (Keean Johnson), who must undergo a brain operation that will leave him deaf. You could argue that the darkness of these stories is a way of respecting young audiences, a way of forcing them to confront how tough life can be. Then again, the most distinctive aspect of YA disaster porn is that it serves up scenarios of tragic circumstance and then milks them for sweetness and light. I’m not sure if that counts as a confrontation or a dodge.

Marcus, who lives in what he tells us is “the safest suburb in America,” is an ardent music geek who devotes himself to making mixtapes for people. He listens simultaneously to two pairs of headphones, one with music and one with ambient noise. “Some people play video games,” he says. “Some watch movies. I listen to Sonic Youth while pretending I’m walking through a thunderstorm.” His mixtapes have titles like “The Ultimate Playlist of Third Dates,” “The Ultimate Playlist of Suburban Acid Trips,” and “The Ultimate Playlist of Facebook-Stalking Your Ex at 3:00 a.m.” All of which makes him sound a bit classically retro, like John Cusack in “Say Anything” crossed with Rob Sheffield, though Marcus is deliriously happy in his work. Music — sound — isn’t just his hobby, it’s his companion. It completes him.

But here’s how dark the movie is. In the opening 10 minutes, we learn that Marcus has a scar on his back because his house caught fire and his older brother, Alex, lost his life in the process of saving him. Then Marcus goes out to a club to hear a band called Sharkitecture, and in the midst of staring, starry-eyed (or maybe one should say starry-eared), at the opening act, a flame-haired indie rocker named Wendy (Madeline Brewer), who’s like Emma Stone crossed with Exene Cervenka, he swoons — and it’s right there that he takes an elbow to the face, and has a seizure.

Marcus wakes up in a hospital, where it turns out that he has tumors in his brain. (That elbow didn’t cause him damage; it just revealed the damage.) The tumors are near the auditory function, so if they’re removed (which they have to be), he’ll lose his hearing. “What about hearing aids?” he asks. The doctor, played by Bonnie Hunt, replies, “You’ll no longer have the anatomy that would support a hearing aid.” In other words: This is a movie about the psychodramatics of hearing loss that makes “Sound of Metal” sound like a mild case of tinnitus.

“The Ultimate Playlist of Noise” isn’t based on some big-hit YA novel. It’s an original, written by Mitchell Winkie and directed by Bennett Lasseter (the son of the former Pixar guru John Lasseter), though these two, who have never made a feature before, have clearly seen and processed a great many movies, like “Nick and Nora’s Infinite Playlist” and “Me and Earl and the Dying Girl.” For a while, “The Ultimate Playlist of Noise” feels like the Disney Channel version of a Sundance film, especially when Marcus announces his bucket-list odyssey: Before his surgery, he plans to go on a month-long road trip, taping his favorite sounds along the way. “Big sounds, small sounds, and everything in between,” he tells us. “Nothing boring. No B-sides. I wanted the greatest-hits album. A life’s worth of hearing crammed into just one month. It would be like a going-away party for my ears.”

If that strikes you as more than a bit cringe-worthy, then, like me, you’re probably not the audience for “The Ultimate Playlist of Noise.” It’s a cookie-cutter movie, typified by the scene in which Marcus, on the road, runs into Wendy, the indie rocker — and I do mean runs into (with his car), as she’s hitchhiking. (Don’t worry; she’s fine.) A twist like that might have been marked [insert better scene yet to be written here]. And wouldn’t you know it: They’re both headed to New York. Her ex, who’s trailing them, is a violent stalker, but she sent a demo tape to Sylvie Scar, Marcus’s old-school punk-rock idol, and has landed a meeting with her.

On the road, here are a few of the sounds that Marcus catches and catalogues on his cassette recorder: Velcro Buckling, Windchimes Extravaganza, Chinese Food Lunch Rush, Pinball Wizardry, Fireworks (Preferably Dangerous), Fast-Talking Auctioneer, Skipping Stones on a Lake. Yet just when all of this gets too cute for comfort, and it looks like the movie is using his sound collection as a form of denial, it acknowledges…that Marcus is using his sound collection as a form of denial. In the end, the film does that YA disaster…thing. It gets to you. Or, rather, the situation gets to you. How could it not? In the last 20 minutes, Keean Johnson, who mostly acts cool and on top of things, drops his guard, letting in an honest ripple of pain and fear. He hits a true note, and the fact that Marcus can’t hear it almost makes up for the doom-laden whimsy of the rest of the movie.