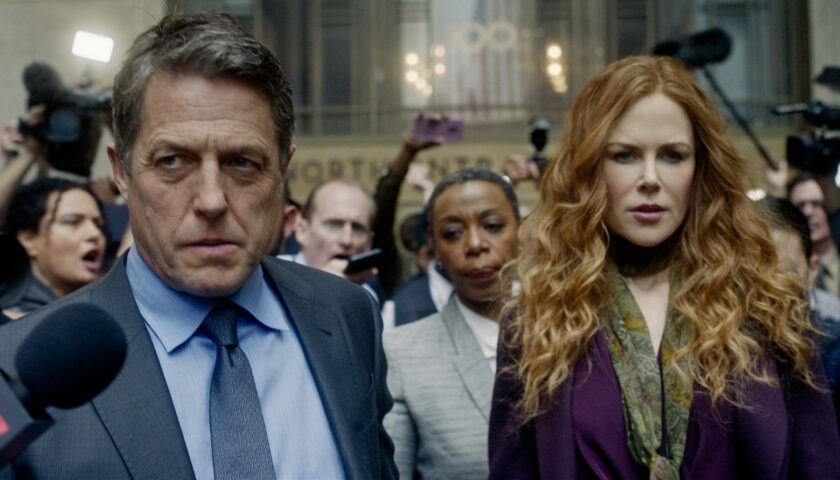 Nicole Kidman is unparalleled in the art of playing a woman who’s equal parts flinty determination and distraught pain. When her face falls in shock, her character is likely to fight the instinct to fall apart, instead steeling herself for whatever’s yet to come. It’s a balancing act that found a particularly remarkable showing on TV in David E. Kelley’s “Big Little Lies,” where Kidman played a woman on the edge of shattering within her abusive marriage. In “The Undoing,” Kelley once again enlists Kidman to play a wife overwhelmed by her husband’s potential for perfidy, a role she once again owns with an irresistible force. But not even Kidman’s performance, nor sharp turns from the likes of Hugh Grant and Donald Sutherland, can quite center its diffuse interests.

The new HBO limited series is, to no one’s surprise, ably acted and handsomely made. Director Susanne Bier (“The Night Manager”) shoots the chilly New York winter in which the show’s catastrophic events unfold with an eye for the unsettling. Characters steal glances through cracked doors and lonely street corners. Bier’s camera spies on their gorgeous homes, dripping with more money than most New Yorkers could ever see in ten lifetimes, from impossibly high angles, making them feel ever more cavernous and all-consuming. When Kidman’s character Grace gets overwhelmed, we see flashes of the horrors running through her head — and it’s just about impossible to tell if we’re looking at the past or some imagined version thereof. In these unsettling moments, when Grace acts as an unreliable narrator in the increasingly bizarre story of her own life, “The Undoing” is extremely effective as a psychological thriller. Where it gets lost, then, is in chasing the scattered interests of its ever-twisting plot.

Grace’s world turns upside-down the day after a young New York City mother is gruesomely murdered the night after her glitzy private school benefit. (Yet another “Big Little Lies” parallel.) The media, salivating over the details of a crime implicating the city’s most elite social strata, can’t get enough coverage of the aftermath and ensuing court case, i.e. the stuff that tabloid dreams are made of. Pundits debate the hazy facts of the case, pointing out that the victim, Elena Alves (Matilda De Angelis), was unlike the other manicured mothers at the elite Reardon School, being Latina and poorer. When turning to the prime suspect (Grant), they make sure to highlight that he’s not just a charming children’s oncologist, but a white and obscenely wealthy man. (Grant, playing more or less against type, is perfect casting as a man most can’t help but love, even when given proof that they really shouldn’t.) That his father-in-law (Sutherland) has the kind of old New York City money that practically grants him his own zip code can’t hurt, either. And when push comes to shove, the skeptical reports continue, who’s the jury going to believe: dead Elena and her taciturn husband Fernando (Ismael Cruz Cordova) of Harlem, or upstanding citizens Jonathan and his statuesque therapist wife (Kidman) who’s modeled her entire life on being as helpful and presentable as possible?

These are useful, interesting questions about an all too real dynamic that lies at the heart of a growing class divide. So it’s frustrating to realize that “The Undoing” raises these issues almost as a courtesy before almost entirely glossing over them. As with “Big Little Lies,” Kelley’s scripts show just enough awareness of those people who don’t plan fundraisers from their lavish mansions to acknowledge them, but not enough to shed any real insight. More disappointing still, Elena spends most of her time onscreen as a mysterious object of lust — or else horribly murdered, her face bashed in beyond recognition on the floor of her studio. It’s a terrible combination of stereotypes relegated to Latina characters too often, and Kelley doesn’t come close to subverting them in this iteration.

“The Undoing” comes so close to commenting on privilege and injustice with something like awareness, but all too quickly devolves into the very stereotypes it purports to understand. After watching five of the series’ six episodes, I even found myself thinking that “The Undoing” might actually be more successful if it had eschewed addressing race and class entirely. Sure, it would be another kind of ridiculous to have a show entirely about the rich eating their own. But as something like “Succession” has shown, it’s more than possible to do so while making plain just how wildly privileged the characters are while avoiding tired clichés of the disenfranchised. In fact, there are moments when “The Undoing” does exactly that to very smart effect. Grace is rarely more unnerved than when faced with Detective Mendoza (Edgar Ramirez), who’s entirely unimpressed with her entire world and has no trouble cutting through its vague placations to get to an actual point. And as Jonathan’s ruthless lawyer, Noma Dumezweni turns in the show’s most piercing performance; even the slightest raise of her skeptical eyebrows is enough to rattle Jonathan and Grace in a way that neither has felt in perhaps their entire lives.

That “The Undoing” falls apart under scrutiny probably won’t matter all that much. Plenty of viewers will undoubtedly be thrilled to tune in to a glossy HBO drama starring two of the world’s most telegenic people in a story tailor made for true crime podcasts. It’s just a shame that it couldn’t resist those clichés to become something much more powerful than just another case of the week.