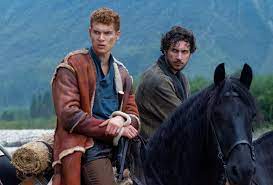 heThe Wheel of Time, Amazon’s foray into epic fantasy, is not Game of Thrones. There’s a natural inclination to compare the two, or to imagine that the audiences of one could swap out for the other; there’s also that persistent rumor that Jeff Bezos pushed for Amazon to acquire the series as an answer to HBO’s breakout genre hit. But where George R.R. Martin wrote of lands wrought with cynicism and intrigue, murder and anger, Robert Jordan — and showrunner Rafe Judkins — bring in a lightness, innocence, and hope.

This is not to say there’s no violence or backstabbing in The Wheel of Time. In the six episodes made available to reviewers, there are plenty of battles and monsters that strike fear into the most heroic of hearts. But part of what people love so much about Jordan’s series is that it’s the hero’s journey, an epic quest, but turned sideways and far more gender inclusive than its mainstream compatriots at the time. Consider yourself warned: don’t come to The Wheel of Time for gratuitous sex scenes.

Amazon Prime will premiere the first three episodes, nearly half the first eight-episode season, on Nov. 19. That choice feels like a gambit to pull viewers new to the series into the complicated world of the Great Pattern’s making, and abate some fears of longtime fans, the self-dubbed dragonsworn, who have imagined how the series — 14 volumes, published over the course of 23 years — would play on screen. The books kick off with Moiraine (Gone Girl’s Rosamund Pike) in the midst of a long journey in an attempt to find the prophesied Dragon Reborn who will defeat the Dark One and stop the world from breaking. She is an Aes Sedai, meaning she’s part of a magical faction dedicated to saving the world and that she can use the One Power. In the small hamlet of Two Rivers she finds three potential dragons, and embarks on a journey to keep them safe and figure out the chosen man among them.

Judkins updates this in the Amazon adaptation: There are still the three men from the books — Rand al’Thor (Josha Stradowski), Matrim Cauthon (Barney Harris), and Perrin Aybara (Marcus Rutherford) — but they’re now joined by two women, Egwene al’Vere (Madeleine Madden) and Nynaeve al’Meara (Zoë Robins). The latter exist in the books as significant characters, Jordan writing from their perspectives, and giving them their own distinct storylines that have immense impact on the overall plot. But in the books, Jordan explicitly tells us that Rand, Mat, and Perrin are important by naming them ta’veren — people who, in-world, significantly impact the story, or who have remarkable events happen around them. He doesn’t do the same for Egwene and Nynaeve. But not only did Judkins give Egwene and Nynaeve the grace to potentially be the prophesied Dragon Reborn, he also made the choice to shift focus to Pike’s Moiraine.

It’s a somewhat radical change, and a telling one. The show actually opens with Moiraine getting ready for traveling while her voiceover gives us context for the world we’re about to enter: Many years ago, the world was broken by powerful men who thought they could cage darkness. It’s a strong statement by refocusing our attention on a character whose perspective is rarely centered in the book series. And it’s a strong statement from Judkins that Moiraine is our entry point as viewers. Here we get an immediate attempt to subvert how women would traditionally be represented in fantasy. Starting with a fake out, it’s Moiraine pulling a shirt up over her bare shoulders in what could be seen as sexualization, but very quickly shifts to journey-mode with her pulling her suspenders on, gloves, her weapon, her tools, and holding a map. Pike has said that she was attracted to the role after seeing a woman as this force for change, and as the guide to a fellowship of important characters upon whom the fate of the world hangs. Pike is more than up to the task, embodying the agelessness and wisdom Jordan wrote of, but layering in a needed thread of humanity — even if her perfected tear-filled eyes do get to be a bit overused at times.

In the books, Jordan plays with point of view — he shifts perspectives constantly from men to women, between characters large and small — and themes of balance, making it clear that in a perfect world everything should be equal and even. But he has a frustrating and dated commitment to a very binary way of thinking, especially in regard to gender. In his writing, men and women are constantly at odds with one another, they’ll never understand the other, and Jordan often attributed actions or choices entirely to one’s gender. The One Power itself is rooted in men and women each owning one half of that power. There’s no recognition of how people who exist outside that binary would fit into the system. Judkins and company do manage to update these ideas, with certain relationships or mysteries, but only to a point. Barring revelations in the seventh and eighth episodes, it seems to stick to the world Jordan created, where men have a certain relationship to the Power and women have another, and there doesn’t seem to be a space beyond those two identities.

By and large the changes pay off, given the amount of time Amazon has allotted for the first season of the story (Judkins says he’s mapped out eight seasons, but at seven or eight episodes each that’s not a lot of time given how long the books are). By design the show is not a scene for scene replication, thankfully, but it still manages to hold onto the spirit of the books, even with some favorite characters missing, or scenes amalgamated together. Perrin’s guide Elias is nowhere to be found, and as the show attempts to combine storylines from several books at once, the journey Mat and Rand take to Caemlyn is redirected entirely. One of the biggest departures from the book is a major death that will likely frustrate readers and new viewers alike.

But Judkins retains Jordan’s commitment to the innocence of these characters. Our core cast of young people: Nynaeve, Egwene, Rand, Mat, and Perrin, have all only ever known their small village, and they’re thrust into this adventure. Judkins really allows them to be as wide-eyed and terrified and excited and brave as they want to be, arguably one of the most important aspects of the books, and done to fine effect here. Moiraine and Lan are allowed to be furious fighters who retain their hope for the future, and their commitment to surviving. In the premiere, there’s a truly stunning sequence of the two of them fighting in tandem, one with magic and the other with a blade. Overall Judkins and his team have done an admirable job bringing Jordan’s epic story to the screen.

There aren’t really words to describe what a joy it is to see a fantasy series with such a matter of fact statement on what a fantasy world could look like. Every society and community presented has a wide array of skin tones and bodies, and the show doesn’t feel the need to explain why. It’s just the way this world is, filled to the brim by a diverse and talented cast.

Not every choice is perfect: the show still falls prey to colorism practices common in Hollywood. Abdul Salis is a real stand-out with his role of the painfully reprehensible Whitecloak Questioner Eamon Valda, part of a group of zealots who arbitrarily designate people as Dark Friends and who hate and hunt the Aes Sedai. He’s terrifying and his first appearance calls to mind John Noble’s Denethor in The Lord of the Rings trilogy. But the scene where he, as a dark-skinned Black man, manhandles Pike’s Moiraine is difficult to stomach, particularly within the context of the very long history of entertainment deliberately mythologizing and falsifying Black men’s aggression against white women.

That said, Salis is so good in all of his scenes, you can’t take your eyes off him; his work, wonderful and compelling as it is, cements the White Cloaks as just as important a villain to watch as the ever-present references to the Dark One. And it’s emblematic of the rest of the immense talents that fill out the world of Wheel of Time. We only get the briefest glimpse of Johann Myers as Padan Fain, but I already can’t wait to see where he will take the infamous character. And though she doesn’t appear until the latter half of the season, Sophie Okonedo as the Aes Sedai Amyrlin Seat Siuan Sanche is an utter scene-stealer.

If it feels like Wheel of Time still has room to grow, that’s because it does. The writers pull narrative threads from the first three books, as well as the prequel title, A New Spring, which largely works, but does lead to some pacing issues. While the show takes its time to unravel who the Chosen One will be, the first book is much more obvious. For those who have read the book, The Wheel of Time show begins to feel strange as it continues to obfuscate over who the Dragon Reborn actually is. It’s a decision that leads to some strange and frenetic pacing and odd structuring throughout the series, with the show needing to follow characters who aren’t doing anything particularly interesting equally with characters who are, purely in the interest of manufacturing mystery around who the Dragon is.

That frenetic pacing and structuring of the story do make it somewhat difficult to follow at times — there were frequent scenes where a character might have a single line before moving onto the next, or ones that felt they were there just to dump exposition out. I wonder how many viewers will remember Moiraine’s long monologue about Manetheran, or how many were surprised after such an action-packed first episode to get a second episode full of walking and talking. But still the show has its rewards, and is enjoyable to sit through multiple times, with new pieces of set or character being discovered on each watch. Nestled in that exposition is fantastically detailed world building, and I found myself pausing and rewinding just to get a closer look at the costuming — masterful work by Isis Mussenden — or the constructed sets (like that of the Two Rivers). The commitment to detail just adds to the authenticity of the characters — they all feel like real people despite the fantastical reality they live in.

After so many years of waiting, there’s certainly a lot for fans to chew on with this adaptation. The Wheel of Time is a very strong start to a much-awaited series and created by someone who has a clear understanding of how adaptations can soar when complementing their source material rather than just copying it. It remains to be seen how much of Jordan’s world can really fit in such a tightly compacted running time, however, as the books just get grander as they go on. I’ll be tuning in to find out.