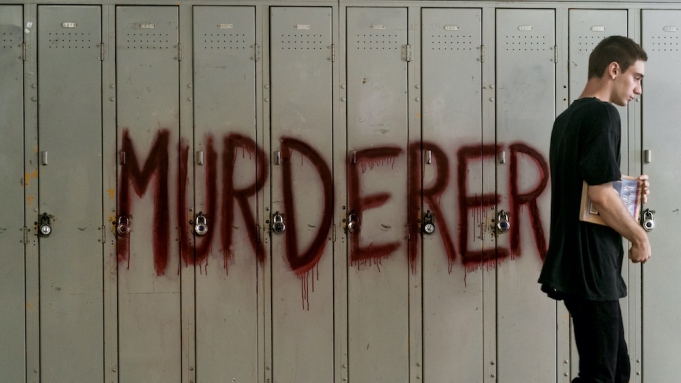 A socially conscious “Scream” riff about a killer who takes cancel culture into their own hands (with the help of a taser gun and a very large knife), Patrick Brice’s “There’s Someone Inside Your House” strives to modernize slasher movies for the social media age by suggesting kids today are more afraid of being found out than of being filleted alive. Sure, the stab-happy serial murderer stalking this film’s extremely diverse cast of rural American high schoolers is willing to slit some throats at the end of the night, but it’s their bloodlust for accountability that gets them out of bed in the morning. Likewise, the killer’s teenage prey aren’t terrified by the threat of a maniac in their midst so much as by the idea that someone might know what they deleted last summer. It’s a subtle distinction — far too subtle for an un-scary movie that never evolves beyond “what if Wes Craven, but super woke?” — but there’s a slightly different edge to a slasher in which becoming the victim of one crime means owning up to another.

Adapted for Netflix from Stephanie Perkins’ YA novel of the same name, “There’s Someone Inside Your House” naturally opens with a kill that makes good on its title and conveys the gist of the self-aware story to come. Instead of Drew Barrymore, the victim is the star quarterback of the high school football team, and instead of being terrorized by phone calls about his favorite scary movies, he wakes up from a nap in his family’s middle-of-nowhere Nebraska farmhouse to discover that the place has been wallpapered with photographic evidence of that time he violently hazed a gay teammate.

We get the sense that an Instagram apology isn’t going to get him out of this one, though. In the funniest bit of a film that loses some of its extremely online wit as it goes along, he tries to bargain his way out of death with a different app, telling the killer “If you want money, I can Venmo you right now!” moments before he “takes a knee in the game of life.” His attacker seems unmoved by that appeal, though it’s hard to say for sure because their identity is disguised underneath a 3D-printed mask of the football star’s face. Everyone who dies in “There’s Someone Inside Your House” effectively murders themselves, cut down and sliced up by the consequences of whatever secrets they were trying to hide.

That’s one thing when it comes to a homophobic jock whose entire personality can be distilled to “likes physical abuse, long naps, and talking about jizz on the phone with his bros,” but transfer student Makani (Sydney Park) and the rest of her outsider clique seem less deserving of the butcher’s knife, no matter what they may once have tweeted. Some of her friends already feel exposed by dint of their public identities; the gender-nonconforming Darby (Jesse LaTourette), the Latino slacker Rodrigo (Diego Josef), and the tortured gay running back Caleb (Burkely Duffield) are naturally vulnerable in a red-state high school where the student body president is an outspoken white nationalist.

Others, like the rich Aryan miscreant (Dale Whibley) whose dad is the most powerful businessman in town, have something they’re ashamed to share with even their besties. Makani has several, including a shady past and a secret fling with the “sociopathic” loner (“Never Rarely Sometimes Always” creeper Théodore Pellerin) who isn’t allowed to sit at her lunch table, but even her biggest scarlet letter is still hard to make out by the end of the movie.

In part, that’s because “There’s Someone Inside Your House” begins to obscure itself from the moment you can tell where it’s going, as Henry Gayden’s script flips genre expectations in what feels like a bad disguise for its unwillingness to subvert them. The first thing these kids do once they discover the killer’s M.O. is throw a massive party where everyone is meant to reveal their secrets, thereby neutralizing whatever privileged information may have gotten them murdered. It’s a clever move, all the more so for how it should allow the movie to investigate the ways that extremely online young people might perform transparency. But it proves fatal for a film that still wants to be an old-fashioned slasher at heart.

And it might prove fatal for that film’s final girl as well, because even at the “cancel yourself before someone cuts your jugular” party, Makani can’t bring herself to bare her soul. “Funny how it’s sometimes easier to be ourselves around strangers than our own friends,” someone tells her. “You’re the only one who lets me disappear,” she says to her on-again secret crush, Makani’s echoing fears of exposure and visibility growing so loud that whoever is dicing up her fellow students can hardly get a word in edgewise.

As the movie drifts toward indie drama in its middle chapters (full of long night drives scored by dark synth-pop) and focuses on Makani’s ability to change, the killer is reduced to nothing but a taser-happy specter of cancel culture — someone tearing people open at the seams because it requires less time and dexterity than helping them sew themselves back together. Due to a lack of decent suspects and an overabundance of characters who are as flat and empty as the farmland around them (which at least provides an intriguingly unexpected backdrop for a slasher movie), the mystery of the killer’s identity never becomes strong enough to carry “There’s Someone Inside Your House” through its loose string of romantic subplots and basic kills. The blood factor is high, but the creepiness that quite literally defines Brice’s “Creep” series is nowhere to be found.

On the one hand, the person behind the mask is irrelevant. “You have no idea who I am,” they announce when revealed. “You don’t even know who you are.” On the other hand, the killer’s identity is obvious and morally uncomplicated in a way that undermines their point: We know exactly who they are. A slasher movie could be a compelling framework through which to subvert the (timeless but super Twitter-ified) temptation to reduce people to the worst thing they’ve ever done, but “There’s Someone Inside Your House” isn’t sharp enough to meaningfully subvert our bloodlust or eviscerate our need for blame.