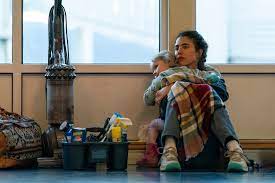 In the middle of the night, a young woman grabs her daughter and runs, using what little gas is left in her car to flee her abusive partner.

That’s the way “Maid,” a new drama on Netflix, starts, as Margaret Qualley’s Alex runs from her daughter’s brutish father (Nick Robinson). What the show does well, in the episodes that follow, is to depict the ways in which, for many people trapped within the lower echelons of the economy, clean breaks are impossible. Alex, daughter (Rylea Nevaeh Whittet) in tow, finds itinerant employment as a home cleaner, but the hours aren’t enough to liberate her financially, and endless challenges with childcare, the legal system, and an impossible housing market mean that Robinson’s Sean swirls in and out of her life.

“Maid” is not exactly naturalistic — the show is not shy about using sometimes overheated visual metaphor to convey a plight that we already understand is quite challenging, and some of the performances and dialogue are quite florid. But the series does generally have an admirable soberness and seriousness of purpose when it comes to gaming out how, exactly, Alex’s story might unfold, from a pitched custody battle to entering a domestic-violence shelter. A running tally in the upper-right corner of the screen emerges at moments of highest stress about money, as when Alex spends on her uniform for maid work: That tally and the stifled frustration on Qualley’s face conjures a sense of quite how much Alex is starting from behind.

Qualley, a compelling and sharp performer, could lead viewers anywhere. Audiences who know her best as the ephemeral hippie from “Once Upon a Time in Hollywood” may be surprised at just how well she can conjure up senses of anxiety; of ambivalence about Sean, who periodically seems to Alex on the verge of really changing his ways; and of deep resourcefulness. When she has even a little bandwidth, Alex, an aspiring author, tries to write herself out of her situation, and Qualley does a good job showing us Alex’s power of observation, and the spinning gears within the writer’s mind.

Alex feels as real as the situation she’s trapped in — and Qualley has help from a script that is clear-eyed about Alex’s life: “Maid” is based on Stephanie Land’s memoir about her time as a domestic worker. (The show was created by the playwright Molly Smith Metzler and counts among its EPs John Wells and Margot Robbie.)

The bluntness it takes to convey a really bad situation can fall flat, though: “Maid’s” dialogue is often focused on brutal efficiency. Alex’s boss (Tracy Vilar) is often asked simply to describe the stakes of a given episode, and one of the homeowners for whom she cleans (Anika Noni Rose) signals her class status with this tough-to-take line: “A week ago, I was eating arugula in my corner office!”

Performance saves both of these portrayals: Vilar, who has not been given much to play, finds on the edges a tough but not entirely unfeeling employer who’s obligated to look out for herself first. Rose, whose character blooms into a key source of support and empathy for Alex, finds the person within the signifiers of wealth. And Robinson, previously a standout on FX’s “A Teacher,” makes the harm Sean doles out when he’s feeling vindictive really sting.

Less effective is Andie MacDowell as Alex’s mother, a spacey and troubled artist on whom Alex cannot rely. MacDowell, Qualley’s real-life mother and a somewhat rigid performer in the best of times, can’t really sell “oddball,” and her presence — frequently making reference to the richness and quality of Alex’s “bloodline” and “ancestry,” which other characters around her ignore — raises questions “Maid” is not prepared to answer. Among them: In featuring a white maid who works primarily for a wealthy Black client, is this series sidestepping the most vital questions about the intersection of class and race in this country?

MacDowell’s character is vital to the “Maid” backstory, in which Alex is trapped not merely by her economic circumstances but by generational patterns of abuse. So it’s unfortunate that the show seems only to become itself when she’s not spouting unanswered truisms about the power of Alex’s lineage. That better show is still flawed: Though “Maid’s” punishing running time could be said to fully make the point that Alex’s drive to survive must overcome unbearable bleakness, it can be slackly paced and maybe an episode or two too long. And Alex’s path to independence can rely at times on characters having surprising changes of heart that don’t feel earned by the storytelling. Again, a generous reading comes in handy — the show seems to be telling us just how many lucky breaks someone in Alex’s situation needs. But it also seems at times to be withholding information from us in a manner that feels less like nuanced storytelling and more like not playing fair.

But this is Qualley’s show, and her performance anchors us even when the show seems to spin its wheels. Qualley, as Alex’s situation flickers into temporary, conditional security, shows us what it feels like to have space and time to think after having been denied them for so long. Slowly she comes back into herself, and reveals herself to us as a character. “Maid” begins as a race to freedom. But it’s in the treadmill of days of Alex’s life that follow that we see what about this story is most exciting.

“Maid” will be released on Netflix Friday, October 1