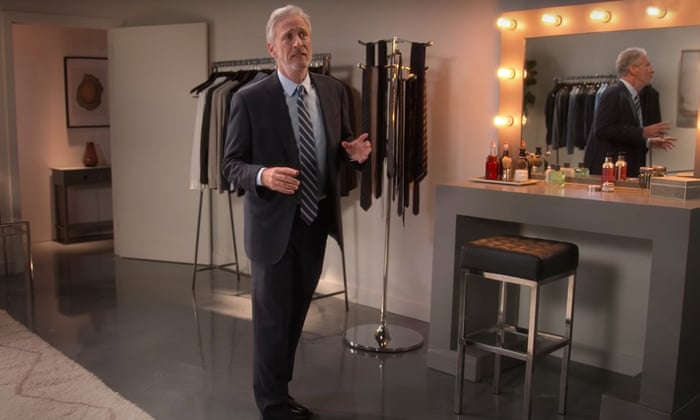 “The Problem with Jon Stewart” opens by both hearkening back to “The Daily Show” and distancing itself from the Comedy Central show that once made Stewart an exasperated voice of reason for frustrated liberals across the country. Six years after he ceded that desk to Trevor Noah, Stewart is now coming back to television as a sort of exhausted elder statesman of late night. Answers to the broader questions surrounding his return — why now, and what for? — need some time to crystallize. So in the meantime, “The Problem” begins by showing the audience a behind the scenes slice of Stewart and his new writing team brainstorming what, exactly, “The Problem” should look like.

Stewart, now grayer and more casual in a T-shirt versus his rumpled “Daily Show” suit, asks his writing team, now smaller and more inclusive of people with experience outside of being a white guy at the Harvard Lampoon, what this show even is. There’s a clear opportunity here — years after his defining gig, with carte blanche on a streaming service like Apple TV Plus — for Stewart to do something completely unlike anything he’s done before. Instead, he points back to the 2010 “Daily Show” episode in which they dropped the show’s typical format for Stewart to interview several Sept. 11 first responders whose health continued to suffer. “Let’s have the first act be a sort of mall map — ‘you are here’ — for whatever issue we’re dealing with,” he says, suggesting that the second act (“or whatever”) be a panel discussion in which he can talk more directly with “the stakeholders” of that particular issue. The “Daily Show” first responders panel was both unlike anything Stewart had done on the show before and has since become a seminal moment of his career, so it’s not altogether surprising to hear it come up in the brainstorm process for his next TV chapter. But it is interesting, at least, to watch him work through the question of what he can bring to media in 2021 by mining his own past for a candid, more personal approach. Stewart is well aware that bringing his perspective back to television, at a time when both the medium and the world look vastly different from those he left behind even just six years ago, requires him to strike a tricky balance between appealing to “Daily Show” nostalgia and twisting his own approach into a slightly different shape.

After establishing its “mall map,” “The Problem with Jon Stewart” unfolds over 40 some-odd minutes that feel more akin to Stewart’s straight-talking “Daily Show” than not. The supersized, specific focus of these episodes also inevitably recalls “Last Week Tonight with John Oliver,” the HBO juggernaut that has Stewart’s former correspondent deliver dense, indignant weekly monologues every Sunday. When “Last Week Tonight” premiered in 2014, its weekly deep dives into a single thorny topic represented a significant creative swing. Now, it’s a hit and perennial Emmys favorite that’s become a road map for how late-night TV can capture attention without losing out on the details, and “The Problem” clearly took note.

In the series’ first episode, Stewart uses his new platform to highlight a grave injustice that, he says with some vague hope, might truly be “something bipartisan and noncontroversial.” This is a bit of a surprising qualifier given that the premiere is titled “The Problem With War,” but as the episode continues, it’s clear that a more accurate title would have been “Veterans.” You could draw a straight line from the “Daily Show” episode Stewart highlighted to this premiere, particularly as he invites on several veterans and their partners to explain the simple, devastating truth of how the U.S. government cast them aside once they were no longer useful. Given the episode’s title and the show’s overall focus on being a better citizen of the world, it might have been useful to also consider the effects of “War” and the burn pits on people who already lived in these countries before U.S. troops took over. That doesn’t quite fit the “bipartisan and noncontroversial” brief, though, and so it goes unsaid.

Rather than tackle the overwhelming ineptitude of the V.A. at large, Stewart hosts a frank, if abbreviated, discussion on the long-lasting health effects of manning “burn pits,” the drastic measure U.S. troops used to burn any and all waste while deployed in Afghanistan and Iraq. He also ventures outside the studio as a correspondent — a role he never played on “The Daily Show” — to confront Secretary of Veteran Affairs Dennis McDonough, who grows increasingly frustrated with Stewart’s repeated request to say why, exactly, bureaucracy should be holding up crucial healthcare. Unlike “Daily Show” interviews, conducted by correspondents like Oliver and Stephen Colbert donning hyperbolic personas, Stewart is entirely himself: firm, curious and impatient to call out bullshit when he sees it.

The second episode of “The Problem,” airing Oct. 14, focuses on the even more vast topic of “Freedom.” Stewart begins by mocking the continuing anti-mask and anti-vaccine movements within the United States before speaking with dissidents from countries where personal freedom has become a precious commodity. These topics give Stewart more room to use actual punchlines (the first episode’s grave sense of purpose leaves little room for levity), and even one of his signature, sputtered exclamations of “what the fuck?” The interview panel — featuring an Egyptian comedian, Venezuelan lawyer and Filipino journalist — is no less pointedly structured than the veterans’ one, but the episode also allows it more time and room to explore the topic beyond its most basic bullet points. “Freedom” seems at first glance like a more natural fit for a series premiere than “War,” though that’s probably because the audience knows better where to laugh in the punchier second episode.

In both episodes, Stewart guides the studio audience from outright comedy bits to sincere monologues and back again. Now speaking from behind a long wooden table while wearing a sweatshirt and bomber jacket instead of a suit, he sheds any trappings of parody to shrug on an ostensibly casual vibe that’s nevertheless just as meticulously calculated as his “Daily Show” persona. Stewart’s not just delivering news and jokes; he’s drawing an even more direct parallel than ever between himself and his audience of similarly exasperated citizens who basically agree with what he has to say. For as much as “The Problem” depends on the charisma of its host, it’s also loud about including voices and perspectives outside its hosts own, whether in sporadic clips of the writers’ room or interviews with people more directly invested in the topic at hand. Still, as with any talk show, “The Problem” is more or less built to support Stewart’s own conclusions.

In its initial outing, not a whole lot of “The Problem” feels particularly surprising or brand new. Its most immediately compelling aspect, then, is the restless undercurrent thrumming throughout. Whereas “The Daily Show” used Stewart’s prickly dissatisfaction as a comedic engine, his new show spotlights it with a more focused determination. It’s almost as he left the “Rally to Restore Sanity (and/or Fear)” he threw years ago with Colbert and realized that such a restoration might require more than pointing out the obvious fact of a world gone mad. Even when “The Problem” indulges that impulse, its best moments come from pushing past its first “what the fuck?!” instinct to the bigger, thornier question of, “what now?”

The first episode of “The Problem” is now available to stream on Apple TV Plus.