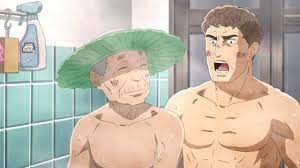 Based on Mari Yamazaki’s manga Thermae Romae, winner of the Cartoon Grand Prize 2010 and the Short Story Award at the 14th Osamu Tezuka Cultural Prize, Netflix original anime Thermae Romae Novae brings some absurdity, humor, and history in pretty equal measure. With Yamazaki herself participating in the series as series composer and recording educational sequences at the end of every episode about Japanese bath traditions, Thermae Romae Novae is one of the most unique anime on the platform and out this season.

Thermae Romae Novae takes place between the Roman Empire and Japan, with Lucious as your bridge between the two. stood at the summit of the ancient world. For the Romans, thermae (baths) were an essential part of their lives and set at the height of the empire, the series follows Lucius, a man following in the footsteps of his father and grandfather to become a bathhouse designer. However, when he is fired for his design ideas being deemed too stale, Lucius’s future as a bathhouse designer is in doubt.

That is until one day, he is sucked into a large drain at the public baths and ends up flowing down a rapid to a Japanese bathhouse. However, an already big himbo energy character, he becomes even more adorably unaware now that he’s traveled through time. Moved by Japanese bathhouse culture, despite his excessive use of a racial slur, he sees how much better bath culture in Japan is. From the murals to the fruit milk drinks, Lucius in his own words begins looking for new things to “appropriate” and bring back with him to ancient Rome —becoming a prolific bath designer along the way.

Lucius is annoying with his incessant xenophobia that continues even as he falls more in love with the culture. That said, it’s clear that the purpose of Thermae Romae Novae is to explore Japan’s bath culture which has a long and important history. This is best shown when Yamazaki talks with bath workers across Japan that explain how important and advanced Japanese bathhouses were compared to Rome. In fact, it’s clear that Lucius is just a great designer because he steals everything from Japan in order to lead Rome to prosperity —and make a name for himself, and that he does.

The comedy in the series comes from the joy and wonder that Lucius experiences when he drinks fruit milk for the first time, discovers scrubbing a back is important, uses a bidet for the first time, visits an equivalent to the Jigokudani Monkey Park, and even discovers the healing ways of hot springs. While this isn’t your typical onsen anime, the adult humor makes the exploration of Japanese baths hilarious great. But Lucius’ ignorance and wonder at Japanese culture can get to be too much at times and for a while, it made me sure I didn’t like Thermae Romae Novae. Like, at all. And yet, I binged every episode in one sitting because I just couldn’t stop watching it.

There is a charm and history to it that made me keep watching uninterrupted and that has to be a larger reason to recommend it than my utter confusion at the character design and story – or what I think is a story. But it isn’t just Japanese culture that serves as a narrative force, it’s also ancient Roman history as well – but from the perspective of bathhouses. Yamazaki asks what if all the most powerful leaders, generals, and people could be saved and changed by one bath designer? And Lucius delivers.

Truth be told, I don’t know what to make of Thermae Romae Novae, but I do know it’s a fun one. It’s awkward and funny while managing to be educational in its ending sequences at the end of every episode. Thermae Romae Novae is going to be hit or miss with everyone because of the characters’ personalities and the animation, but it’s well worth jumping into. A cozy anime about the little things in life, it shows how much a good bath can do.