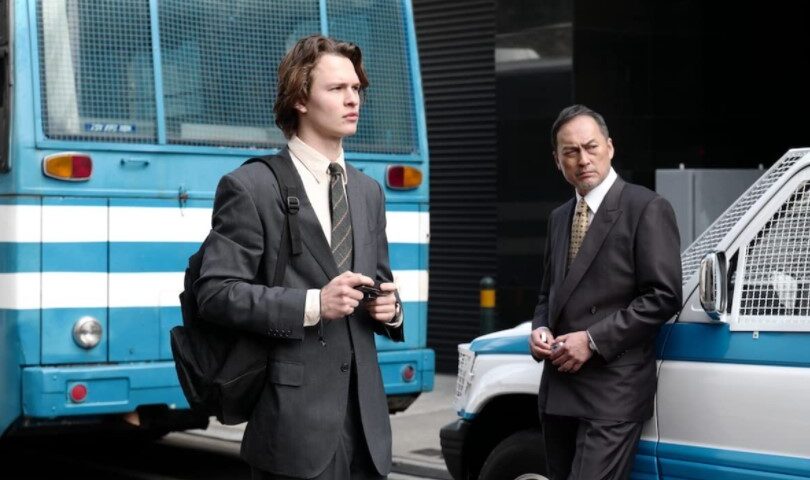 What’s in a name? That which we call a Michael Mann-fronted crime drama series by any other branding would go just as hard.

The title of his latest small-screen enterprise Tokyo Vice (the noted film-maker directed the pilot and served as executive producer on the rest of the HBO Max project) implies some link to his Miami Vice, either the 80s-zeitgeist TV show he produced or the hyper-formalist film remake he directed in 2006. But there’s little trace of the cocaine-cool atmosphere that defined the former or the polarizing digital video textures that defined the latter, the later episodes (critics were shown five of eight in advance) lacking the visual distinction that sets the first apart from the glut of streaming content.

Our guy’s not even a cop – we follow writer Jake Adelstein (Ansel Elgort), an American stranger in the strange land of Japan’s top newspaper, the first gaijin to land a byline on its pages. For his tell-all memoir recounting his investigations of yakuza activity in the city, the real Adelstein (also an executive producer here) used Mann’s classic neo-noir property as a spiritual namesake, a loose connection now made to look like a cinematic universe.

Though playwright JT Rogers presides as showrunner and a handful of directors organize themselves under a sleek house style, the bonding agent between Vices is still Mann’s pet fascinations. The fastidiousness of men doing difficult, detail-oriented jobs represents the core appeal of a show focused on the finer points of its procedural elements, for both journalism and police work. As in most of Mann’s film output, the line between law enforcement and crime grows hazy in the muted respect the opposing factions have for one another’s expertise. And it’s entirely possible that Mann brought his talents to Tokyo for no other reason than it is the city with the highest number of immaculately tailored suits per capita. Loyalists to the unprolific auteur will be overjoyed that he’s still doing his thing within the parameters set for him, like a jam band hiding snippets of their greatest hits in an hourlong medley. Everyone else will be pleased to find that this is all more accessible to the uninitiated than that analogy might suggest.

There’s an inherent watchability in Jake getting his feet wet at his assumed home’s paper of record, mostly in the affable assimilation that the shoe-leather reporting entails. The show draws attention to how much Japanese the American actor Elgort has learned to speak and write for the gig, absolute second-nature fluency being a prerequisite for Jake’s elite new job. His ability to land a story depends more on his manner in the field, however, and his developing ability to navigate the complicated social codes not outlined in his guidebooks. Grizzled detective Katagiri (Ken Watanabe, a commanding screen presence of stoic gravitas) takes Jake under his wing and explains the elaborate web of agreed-upon lies that maintains the uneasy peace between warring clans of gangsters. Preventing an all-out conflict with a high body count can supersede day-to-day police work; when Katagiri needs three perps, he takes the low-level grunts the brutal oyabun running the family gives him, regardless of their involvement. Adelstein’s job demands that he make waves in these stagnant waters, putting both sides of the law in a race to make him their useful ally before he can jam them up.

The show’s curious yet reverent exploration of turn-of-the-millennium Tokyo wends in and out of dojos, love hotels and the most expressively lit restaurants the city has to offer. At a hostess club, where sophisticated women dote on male customers in the purest form of emotional labor, a subplot emerges involving a driven employee with ambitions to open her own pleasure palace. Until Samantha (Rachel Keller) gets a backstory midway through the series’ run, she doesn’t seem to serve much purpose in a narrative often isolating her from the action, and once she does, we wonder what took so long. Her presence does compound the slippery question of how to consider a show set in Japan that foregrounds the perspectives of white expats, even if they’re models of transplant citizenship.

Aside from Jake getting constantly mocked for his out-of-placeness, and eventually learning to use it to his advantage, the show doesn’t pay too much mind to the potential thorniness of its politics. Mann and those coordinated through his vision would rather dig into the nitty-gritty of process, the pleasing payoffs as information comes together and falls into place. Bolstered by taut dialogue verging on the hardboiled, a smattering of viciously swift action, and a lead performance from a star more comfortable than we’ve ever seen him, it’s an exceptionally accomplished take on the True Detective/Mare of Easttown mold in vogue as of late. This isn’t revolutionary television, especially as HBO positions itself at the fore of this genre’s recent spike in popularity, but it’s done here with greater specificity and finesse. Just goes to show – you can’t send some medium-talent journeyman to do a Mann’s job.