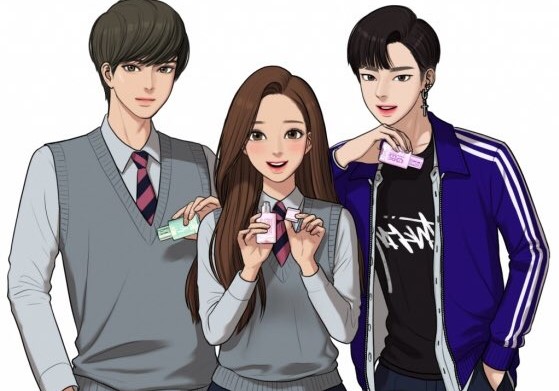 True Beauty, a K-drama about love, beauty and acceptance, is quickly becoming the latest hit series in the genre. The new show, which is only a few episodes into its first season, follows high school student Im Joo Kyung (Moon Ga Young), an insecure teen who disguises her looks by mastering the art of makeup thanks to an endless selection of online tutorial videos.

When she arrives at school, she’s praised for her beauty, but none of her classmates know what she really looks like underneath her makeup. Her classmate Lee Su Ho (Cha Eun Woo), a talented basketball player with impressive grades to match, knows the truth about Ju-kyung, and the two bond over shared secrets.

If you’ve been keeping up with True Beauty, you’re likely looking for more K-dramas to watch while you wait for the next episode to drop. Here are some similar series all about young love, identity and self-discovery, from It’s Okay Not to Be Okay to My ID Is Gangnam Beauty.

We begin episode 1 of True Beauty with a look at Ju-Kyung through the years as her parents comment on how ugly she is after adopting her Mother’s genes.

As a child, Ju-Kyung watches cartoons and longs to transform herself into a fairy. Sadly, the other kids just squirt water pistols at her and bully her about her looks. Rather than a character from a cartoon, Ju Kyung instead compares herself to a character from a horror or cursed story.

As the years tick by, Ju-Kyung does her best to try and spark up conversation with her fellow students but the y don’t want anything to do with her. Instead, Ju-Kyung begins listening to rock music which prompts the other students to continue bullying her, calling her Dumpling. She even runs errands for them and brings them food.

Outside, one of the cafeteria workers, Hyun Bin, shows up and listens to Ju-Kyung’s music, liking her classic taste in rock. This interaction causes Ju-Kyung to immediately take a fancy to him and questions her friend over whether to ask him out or not. Eventually she plucks up the courage and he agrees to meet her for lunch the following day.

That evening, Ju-Kyung starts making some cookies ready to give to Hyun Bin. Meanwhile, her sister Hee-Kyung heads home needing the toilet. Thankfully her parents are there to help her into the main bedroom.

The next day, Ju-Kyung heads to school with her box of cookies but Se-Mi and the others bullies show up and force Ju-Kyung to hurry out and get them food. As she does, she leaves her cookie box behind which they sift through and eventually confront Hyun Bin about. Se-Mi flirts with him and naively makes the boy believe that she’s interested when she most certainly is not.

Unfortunately this all comes crashing down on Ju-Kyung. While asking out Hyun-Bin, the bullies happen to be filming from afar and begin giggling as she sits heartbroken on the ground when he rejects her. As they surround her, laughing and poking fun of her, Ju-Kyeong asks just why they hate her. Se-Mi simply tells her that it’s because she’s ugly.

On the back of this, Ju-Kyung hurries off and begins crying while walking down the street. She heads into the bathroom alone and continues sobbing, believing that everyone hates her and that she has no friends.

Pushed to the edge, she heads up to the rooftop and looks set to jump .Only, she changes her mind at the last second as she notices an advertisement for the late Se-Yeon on the building opposite. This is enough to spur her on and decide not to die after all.

As she steps back, a guy called Lee Soo-Ho suddenly shows up and grabs Ju-Kyeong, pulling her back away from the edge. He tells her to overcome her obstacles and to think of the ones who love her – namely her family. Soo-Ho he tells her not to die. However, Ju-Kyung has lost her glasses and struggles down the stairs without them.

With the lifts out of order, Soo-Ho races off ahead while a blind Ju-Kyung eventually winds up getting a piggyback ride down the stairs. As they get to the ground floor, it turns out the lifts weren’t actually out of order; they were shut temporarily for maintenance.

Anyway, Soo-Ho takes Ju-Kyung outside and unceremoniously dumps her inside a taxi ready to leave. Just before she takes off, she tells him to cheer up.

As we soon see from a flashback, it appears Soo-Ho had a touch of Deja vu and rushed over to help Ju-Kyung after seeing images of someone from his past. Ju-Kyung’s words about being happy certainly ring true for him, as he sits at his desk and mulls over what’s happened.

Meanwhile, Ju-Kyung’s Mum, Hyun-Sook, happens to be working in a beauty parlor. When a shady businessman arrives though, he clearly has ties with her husband and demands to speak to him.

On her way back home, Ju-Kyung realizes that she left a voicemail for her Mother about her suicide but it’s the least of Hyun-Sook’s problems. Back home, she confronts her husband Im Jae-Pil and forces him to apologize and leave the house.

Ju-Kyung eventually heads back home to find her Mother sobbing. Believing it’s to do with her suicide plea, she blames herself for what happened, calling herself ugly and contemplating plastic surgery.

Eventually Ju-Kyung heads to her room and realizes that she and Hye-Min were never friends, especially given the girl was forced to record what happened with the cookies. Ju-Kyung decides to make a change and that comes in the form of doing her make-up. When she returns home though, the geisha-style make-up scares her Mother too.

However, due to their money issues Ju-Kyung learns that she’s being transferred to another school. Before that happens, Ju-Kyung begins learning how to apply make-up using tutorial videos online. She also learns how to trim her eyebrows, but in doing so goes too far and shaves half of them off. However, she works through the night to try and draw it back on again.

At the bookstore, Soo-Ah tries to pick up his favourite comic but learns that the first page has been ripped out. He’s clearly irate and tells the owner to order a new one. Interestingly, the place Ju-Kyung is moving to happens to be nearby to Soo-Ho. As Ju-Kyung pokes her head out the window, her face mask flies off and hits him in the face.

Ju-Kyung is determined to make a fresh start at her new school. She shows up on time at Saebom High and everyone comments how good looking and beautiful she is. It’s a very different reaction to what she’s used to and this time she’s given a warm welcome from everyone around.

Ju-Kyung is tasked with being shown around by Soo-Ho, who immediately walks away from the other girls. However, Ju-Kyung gets make-up all over his jacket, which he subsequently throws at her in disgust. Everyone in the room greets Ju0Kyung warmly though apart from Soo-Hom who sits with a huff and ignores her.

After class, Ju-Kyung finds herself the centre of attention as several of the girls try to get her number. As they sit and ask about her make-up, a girl called Soo-Jin shows up. Ju-Kyung notices that she’s naturally beautiful. At school she’s called the queen but due to their good looks, instantly hit it off. The girls hang out together and things seem to be on the up for Ju0Kyung. She even prints out a picture and puts it in a photo frame.

Soo-Ah and Soo-Jin invite Ju-Kyung to the group chat but her brother, Ju-Young, promises to send a picture of what she truly looks like to her new class mates. Blackmailing her with them, Ju-Kyung is forced into submission and to do her brother’s bidding. It turns out he wants the new volume of his favourite comic and if she gives him that, he’ll delete the picture.

Ju-Kyung shows up at Prince Comics and greets the owner warmly. Eventually, she finds the volume she needs but upon grabbing it, Soo-Ho happens to get it first. As she spins and falls on top of the culprit, the two lock eyes again.