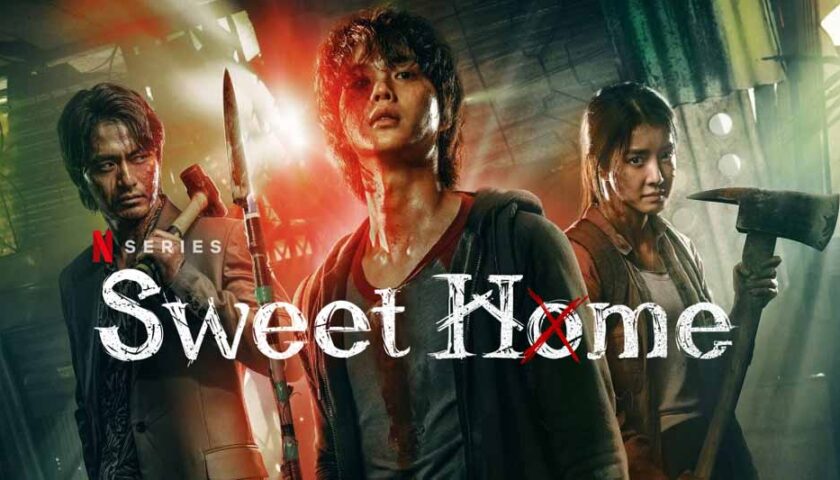 Episode 1 of Sweet Home begins in September 2020. Armed soldiers descend on a snow-covered, abandoned apartment block as we see weird, twisted creatures snarling at the sky. From the wreckage of this building a solitary human being shows.

Blood-stained and staggering through the snow, a helicopter overhead tracks his every move as the soldiers on the bridge prepare to fire. Despite numerous blasts to the chest, he simply brushes these aside and continues walking.

We then jump back a month to find the world a very different place. Lush greens consume the environment as crickets chirp in the distance. Our protagonist, Cha Hyun-Soo, arrives in town. He’s living alone and clearly shy, acting standoffish with the maintenance man outside cutting the lawn.

Upstairs in his apartment, he sits in darkness as the curtains blow and police sirens wail outside. Contemplating whether he should just die or not, Hyun-Soo eventually heads up to the rooftop and looks over the edge.

However, he’s distracted by a girl across the apartment block from him called Lee Eun-Yoo, dancing and practicing her ballet moves. That is, until she steps in chewing gum. After quizzing Hyun-Soo about what he’s doing, she eventually tells him not to die… as it would cause a lot of problems for everyone else in the building.

Downstairs, the security guard is berated by his superior over the bed he has set up in the office. He receives a package of food though, claiming the fish inside is for a resident. As he opens up the container, his nose immediately starts bloodying and he clutches it with both hands.

After patching it up, he greets Hyun-Soo who returns to his apartment. However, not before he hands over a bottle of beer as an apology. Something is clearly up with this guy and Hyun-Soo senses this, checking through the peep hole to see what he’s doing.

Meanwhile, Ji-Soo sits in her room smoking before eventually heading out to work. With a bass guitar on her back, she waits for the elevator as she runs into another resident, a rather crazy lady who wheels a pram with no baby inside.

Ji-Soo soon learns that this woman is suffering from grief as Jung Jae-Hoon introduces himself to her in the hallway. He’s a Korean language teacher but also very religious too.

We see several other residents here, including a shady looking Pyeon Sang-Wook who smokes in his room while torturing someone on the floor. Wrapped up in tape, this man struggles to breathe as Sang-Wook stubs his cigarette out in the man’s mouth.

Meanwhile, Hyun-Soo learns that he’s been selected as a tester for an upcoming remake of a game. He’s told to head over to G-Tower on the 25th August in order to make this happen. As fate would have it, that’s the date he’s got listed as “suicide” in his calendar.

That evening, Hyun-Soo heads out to pick up his parcel but instead finds blood stained across the floor; a breadcrumb trail of ramyeon noodles and a woman pleading for help.

Hyun-Soo cowers back to his room before eventually speaking to his neighbour at the door. She tells him that her cat has gone and pleads with him to open up. When he asks to see her arms however, she completely flies off the handle and scurries away as blood oozes from her nose.

As Hyun-Soo heads outside, he finds the girl gone. Instead, he passes out on the floor in front of Sang-Wook who’s outside Ji-Soo’s door and manages to somehow bend the metal too. Unsure what else to do, she grabs a baseball bat.

With the security guard gone, the doors locked and a killer on the loose, the residents all gather in the main atrium to try to work out exactly what to do next.