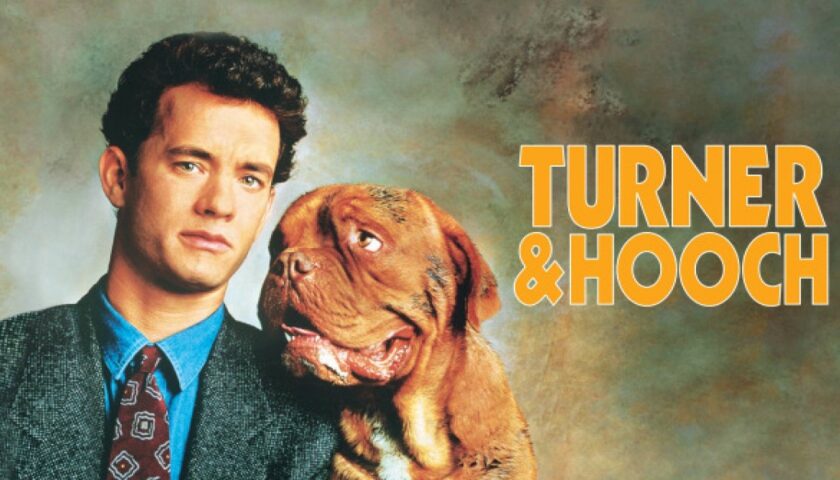 When pandering to nostalgia, it’s probably important to be aware of what your intended audience is actually nostalgic for.

As best I can figure it, when it comes to 1989’s Turner & Hooch, geriatric millennials and juvenile Gen Xers are mostly nostalgic for a poster, that image of a blank-eyed Tom Hanks staring into the middle distance as a slobbering mastiff looks lovingly at the dab of peanut butter I’m assuming somebody placed behind Tom Hanks’ left ear.

It probably isn’t nostalgia for the premise, because Turner & Hooch is basically The Odd Couple if Felix and Oscar solved crimes and Oscar humped Felix’s leg. More frequently.

It probably isn’t nostalgia for the theme, which is “Dogs are smart and lovable” puppaganda on the surface and “Dogs don’t need to worry about Miranda rights and search warrants” copaganda just beneath the surface. Turner & Hooch was part of a small wave of ’80s and ’90s films — see also K-9 and Top Dog — designed to help repair the image of police K-9 units, seen for decades as the vicious adversaries of peaceful protesters.

No, Turner & Hooch nostalgia probably isn’t for the brand as a stealthily conservative trifle. It’s all just Tom Hanks in third-tier charm mode and one slobbering mastiff. Disney+’s new sequel to Turner & Hooch has at least one of those elements and not much more, but if there wasn’t much more to begin with, I guess easy-to-please audiences will be half-satisfied. For anybody else? What were you expecting? Disney+’s Turner & Hooch is not, in fact, the Battlestar Galactica of cop/dog buddy reboots.

Josh Peck, delivering at least a modicum of Hanks’ loose-limbed everyman appeal from that period, plays Scott Turner Jr., son of Hanks’ character from the film. Scott is an ambitious U.S. marshal with an OCD streak. Instead of a pet, Scott talks to his Roomba, which careens around an immaculate San Francisco apartment with all the usefulness of the Maytag repairman.

Scott is neat, professional and thoroughly unprepared when his sister Laura (Lyndsy Fonseca) shows up at his door with the latest in a series of Hooches, the reasonably new mastiff left homeless after Scott Senior’s death. Like the original Hooch, this Hooch loves salivating, running in slow motion and destroying property at a clip that, given the location of Scott’s apartment, may be financially prohibitive. Scott is forced to take Hooch along on rides with his pregnant partner, Jessica (Carra Patterson) and the persistent pup soon runs afoul of their boss (Anthony Ruivivar) and requires assistance from K-9 facility trainer Erica (Vanessa Lengies), who develops such a fast crush on Scott that the writers decided she didn’t need any additional character traits.

Meanwhile, Laura has discovered that even though Scott Senior was just a small-town detective, he’d been accumulating some files on a potentially major case and that his death, attributed to a heart attack, might not have been so natural after all.

That bigger-picture storyline is probably the only way Turner & Hooch could possibly work as an ongoing series, because calling the show otherwise narratively flimsy would be an insult to flimsy things. Each of the three episodes sent to critics is the same basic thing: Hooch makes a mess and Scott’s career seems to be in jeopardy, but Erica explains that he’s just misunderstanding animal behavior and it turns out that Hooch is actually hugely helpful, if you learn to look past the drool. The movie was less than 100 minutes and consisted of maybe three storytelling beats repeated ad nauseam, so it’s perplexing to me that anybody would have thought Turner & Hooch is material for a TV series — and not only that, but a series with hourlong episodes (44 minutes, technically, but still too long).

What’s odder still is that the people behind Turner & Hooch are really, really overqualified. The series was created by Matt Nix, of Burn Notice fame, and the pilot was directed by McG. Evidence of the latter collaborator can be seen in the show’s sunny action beats and derivative flash. The weekly procedural elements point to Nix’s sweet spot, as does the series’ one early creative episode, an extended Die Hard homage in which the pretzeling necessary to make one silly reference is so convoluted it made me laugh somewhat hard. The decision to make Scott a marshal averts the politics of making this a police comedy and lets Nix take the characters into a variety of interchangeable circumstances with no concerns about jurisdiction.

The dog or dogs playing Hooch are thoroughly adequate and exhaustingly anthropomorphized, and presumably fans wouldn’t have it any other way. Again, this means lots of slobbering — pro tip: There aren’t enough synonyms for “slobber” — and, in the third episode, lots of squeaking on a fish chew-toy, a plot that must have been pitched as “Wouldn’t this be funny and annoying?” in the writers room and, onscreen, plays as only one of those two things. Peck is convincingly exasperated with his canine co-star and there’s some sweet, thoroughly desexualized flirting that takes place with Lengies that already, after three episodes, is beginning to show fatigue. Patterson has the closest the series comes to a developed supporting character, and she and Peck are likable enough together.

I couldn’t quite tell you what Fonseca, Brandon Jay McLaren or several other members of the ensemble are even doing here, nor really what the Turner & Hooch legacy brand name means in this telling. Mare Winningham has been replaced by Sheila Kelley as what is now Scott Senior’s widow and given nothing to do. Reginald VelJohnson, Scott Senior’s partner in the movie, reprises the character in the Die Hard episode, another connection that isn’t commented upon.

More than anything, Turner & Hooch continues a recent trend of nostalgia pandering in which, if nothing else, the reboots are living up to the middling quality of the originals. Disney+ has already made Mighty Ducks into a likable-if-slight underdog sports series, which seems appropriate. Space Jam just got a sequel or remake or whatever it is, and if it’s nearly unwatchable, but still quippy and frenetic, that’s appropriate as well. So I’m not even complaining when I call Turner & Hooch a forgettable, one-joke series. It’s hard to know what else it could have been.