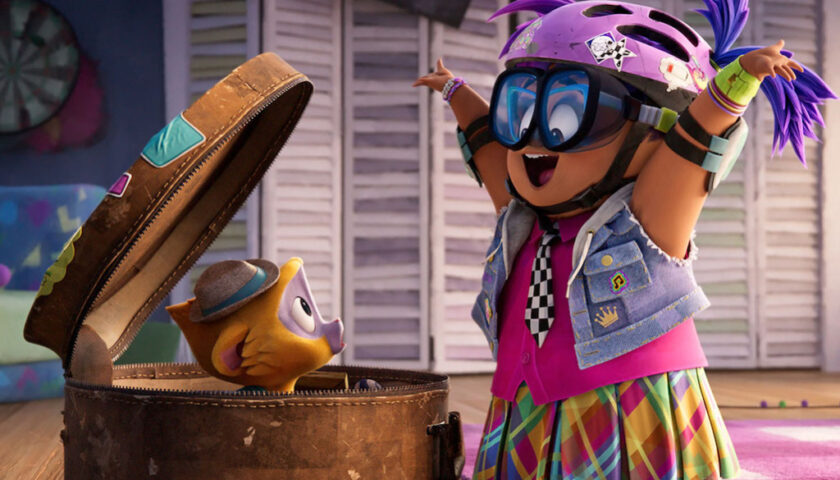 A vibrant collaboration that pairs Lin-Manuel Miranda with Kirk “The Croods” DeMicco, the 3D animated musical “Vivo” bursts out of the gate with a guajira-son banger that falsely suggests we’re in for something a bit more special than the “‘Hamilton’ meets ‘Sing’” elevator pitch that must have convinced Sony Pictures Animation to pay for it in the first place. The idea of Miranda voicing an adorable rapping kinkajou might be a dealbreaker for some people these days — Vivo sports huge eyes, a tiny fedora, and a little teal bandana that ties the whole look together — but all of the overexposure in the world can’t change the fact that “One of a Kind” hits with the same immediacy as any of the great songs he wrote for “Moana.”

Vivo and his elderly human owner Andrés (Juan de Marcos González) make beautiful music together, and the modern-classic mash-up they perform in a downtown Havana square delights all of the people who happen to pass by. These two best friends have a good thing going on, and Vivo never wants it to change. For a kinkajou who fell off a crate as a baby and can’t speak a lick of human (the other characters hear Miranda’s non-stop interior monologue as meaningless chitters), connecting with some kindly old man through the power of song is pretty much the best-case scenario.

Alas, nothing gold can stay. When Andrés receives a letter from the girl who got away — now a mega-famous singer on the eve of her farewell show — he vows to deliver Marta Sandoval the love song he once wrote for her in time for them to perform it together at her final concert. Vivo rages at the disruption of their routine for a couple of hours, but by the time he finally comes around and decides to be there for his friend, Andrés has passed away in his sleep (being a single parent in the first act of animated movie is nothing if not a guaranteed death sentence). And just like that, a cute little creature of habit takes it upon himself to roll with the punches, make the most of life’s unpredictability, and personally give Andrés’ song to Marta in Miami. It’s a fun premise for a great adventure, and a valuable lesson for kids who are liable to get blindsided by the realization that “now” is not “forever.” The only problem is that “Vivo” grows increasingly generic and forgettable as the film goes on, and the closer its furry hero gets to finding a silver lining, the more viewers wish that he never went looking for one at all.

Parents out there should know that the rather young-skewing “Vivo” is busy and colorful enough to keep children occupied for 90 minutes, and while none of the movie’s other songs match the ear-worm potential of its opening number, a few of the more percussive tracks are catchy enough to buy you a short reprieve from the “Frozen 2” soundtrack (nb: IndieWire is not legally responsible for any emotional distress or property damage caused by your kid’s sudden urge to drum against everything in sight). And Sony’s pandemic-inspired decision to sell Netflix the distribution rights lowers the bar for “Vivo” in a way that also raises its value; what might be a tough sit during a Saturday matinee at the local multiplex goes down a lot smoother on your couch.

But there was clearly potential here for something more than a digital babysitter, and it’s a bummer to feel that begin to seep away as “Vivo” relocates to Florida — even if the movie does so with the enthusiasm of someone who’s never actually been to Florida. And unfortunately for our poor kinkajou friend, his trip to the neon streets of Miami will force him to find his way through the rest of the state first. We share his sadness at leaving DeMicco’s romantic vision of Havana, which is saturated with the perpetual sunset of a Makoto Shinkai film and washed in the warm hues of a loving home, and that sadness only deepens when Vivo pops up in suburbia after sneaking into Andrés’ grand-niece’s suitcase.

A precocious tween outsider who rocks a jet of purple hair and a piano-colored necktie that her late dad must have worn to a Flock of Seagulls concert in the 1980s, Gabi (Ynairaly Simo) is a different spin on the same hyper-energetic kid that Hollywood animation has been algorithmically churning out all century long. She’s grief-stricken in a way that’s made her even less inclined to get along with the straight-laced narcs in her girl scout troop, and she’d rather march to the beat of her own drum rather than fall in line with anyone else. Her big number is a percussion-driven hip-hop grrrl anthem that has just enough spark not to sound like an Old Navy back-to-school commercial, and the exuberant parade of DeMicco’s visual accompaniment (complete with giant floats) is far more exciting than anything Gabi and Vivo encounter as they trek through the Everglades in order to hand-deliver Andrés’ sheet music to Marta.

The tunes grow less exciting in tandem with the visuals, as “Vivo” runs out of steam as it trades Key West kitsch for swampland wildlife. The script — co-written by DeMicco and Pulitzer Prize-winning “In the Heights” author Quiara Alegría Hudes — amounts to a good setup and a mild payoff with a vast swath of nothing in between, and the movie struggles from one flat note to the next during its filler of a second act. The feds-in-training who form Gabi’s troop are malignant enough to hold our attention, but the same can’t be said for the ultra-disposable duo of Dancarino and Valentina (Brian Tyree Henry and Nicole Byer), two star-crossed spoonbills who show up to kill time, satisfy genre demands, and save our heroes from a noise-hating snake voiced by Michael Rooker. A film like this doesn’t need a villain, but it certainly can’t afford to hedge its bets by only having one for 15 minutes.

That schematic, box-checking energy — always manic, seldom funny — prevents “Vivo” from living up to the emotional dynamism of its best songs, and it doesn’t help to discover that the song Vivo and Gabi are bringing to Marta isn’t one of them. At least the movie seems to realize that, as not even the vocal stylings of Gloria Estefan are enough to keep DeMicco from cutting away after a few bars. So it goes. “Vivo” argues that a new kind of harmony is always possible for someone with a song in their heart; DeMicco never insists that it has to be a good one, only that it should mean well and express real feeling. If parents are liable to find his movie lacking, there’s also something to be said for succeeding by your own standards.