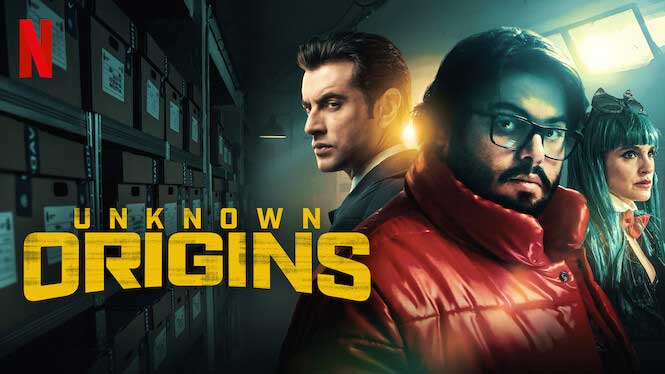 Unknown Origins follows David and Jorge, who form an unlikely team to solve a series of grisly murders with apparently no connections. Well, except for the fact that all of them imitate the origin story of famous superheroes.

This is such a fun and entertaining movie. Except the ending (which I’ll get to in a bit), the entire movie is a rollercoaster of grisly murders, funny banter, and some good relationships. First of all, the murders themselves are really nicely done. They look just the right amount of disgusting and terrifying, enough to make David puke and us gasp. The way they imitate the origin stories is also pretty impressive.

As characters, Jorge and David and absolute opposites of each other. Jorge is a geek, while David is the complete opposite. The former is positive, nice and funny, while David is very curt and serious. However, their bond becomes better the more they spend time with each other to solve the murder. It’s a nice little character development, especially when Jorge tells David his fears about his future. David’s response will make your heart warm. It’s also nice that they included small snippets of the title characters’ backstories, however brief, in such a chaotic film.

Additionally, the costumes, the acting and the cinematography are great. It’s a very good-looking film, that never fails to entertain you and sometimes makes your heart a bit heavy. My favourite character in the movie, however, is Norma. She’s the head of Homicide and she’s a total badass. Apart from being in the police department, she’s also a cosplayer and can make kickass costumes. She’s direct, compassionate, straightforward, and she stands for what is right. She also never fails to deliver fiery comebacks whenever David says something against comic books or superheroes. All three characters are extremely likeable, although David can, sometimes, be a bit annoying.

However, this is where one of my problems lie. Inspite of being such a driving force in Unknown Origins, we all but have no idea about who Norma is or why she is the way she is. Sure, she’s still the most interesting character here, but it’s probably because of that reason you’d want to know more about her.

Another one of my biggest complaints is that Unknown Origins doesn’t do a great job with its villain. For a better part of the movie, you’re left wondering who’d be smart enough to do such heinous crimes with such finesse. However, when the time comes for the big reveal, it is very cliched, making it underwhelming. We don’t know why they decided to do something like this. Although the movie does mention some of the reason, it doesn’t seem believable enough for crimes of this magnitude. Also, the crimes don’t fit the criminal either.

However, the sequence where David suits up to go meet his nemesis is hilarious due to how absolutely dramatic it is. Also, the evidence planting by the villain to motivate David and play with his mind was a clever trick as well.

Unknown Origins is a fun, entertaining and light-hearted movie that probably talks about the fact that heroes and villains are all within us. Human beings have both good and bad within them – it’s up to us when it comes to choosing a side. It also touches upon bullying and how childhood experiences can shape a person. Also, comic books and superheroes aren’t just for kids. It’s perfectly okay to enjoy these things well into your adulthood. Just let people be happy.