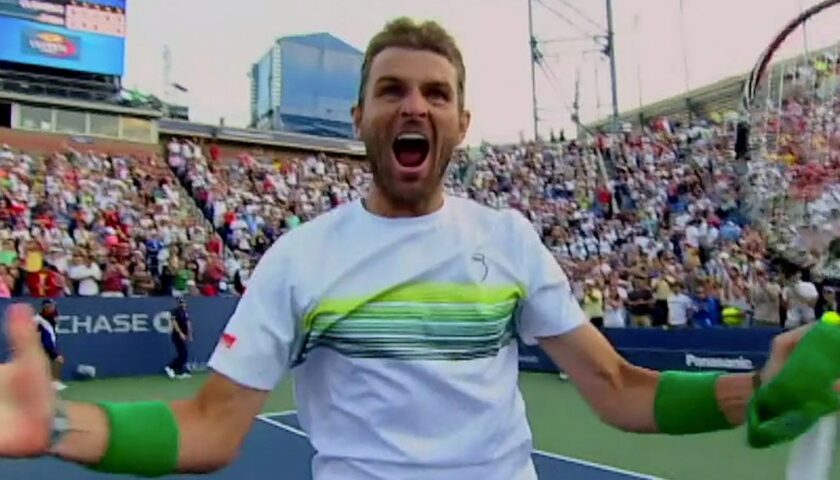 The story of Mardy Fish’s career isn’t just the story of Mardy Fish; it’s a two-man tale, at least at the beginning; Fish’s rise to professional tennis is inextricable from that of International Tennis Hall of Famer Andy Roddick. The two men played together in youth sports academies and traveled together; they were best friends, and they were training partners. Where Roddick’s mix of carefree composure and brutal competitiveness flagged him as a future star in the eyes of coaches and trainers, Fish’s future was less clear; he was largely seen as a sparring partner for the ascendant Roddick, an image seemingly sealed by a loss to his friend in the 2003 Cincinnati Masters tournament. Roddick’s first US Open win quickly followed, and a star was born, “the new face of American tennis”. Fish labored in the background; successful in maintaining a professional career, but seemingly never a threat to break through to the top echelon.

Then something changed. A mid-career revelation, a change in diet, and a renewed vigor for training. Fish decided that if he was to run with the Federers and Nadals—not to mention the Roddicks—of the tennis world, he was going to have to treat training like a religion, a lifestyle. “I was obsessed. It was never ending, I could never be too fit,” Fish recalls.

A new Mardy Fish—leaner, more intensive, more combative—appeared on the court in 2010, starting with a small-tournament comeback win in Newport. From there, he began his long-awaited rise, winning match after match. He logged wins over luminaries Andy Murray, Rafael Nadal, and finally even his good friend Roddick. He rose to become the #7 player in the world, and the top-ranked American, at the late-blooming age of 30.

The pressure would prove to be too much, though; the burden of being the standard-bearer of American tennis and a newly-intense travel schedule brought ailments both physical and emotional. “He became a different person,” one friend notes. “It was like something snapped.” A cardiac incident caused him to pull out of the 2012 French Open; anxiety would sideline him from later tournaments. Soon, he wouldn’t be fighting to be #1 in the world; he’d simply be fighting for his life.

The story of Mardy Fish’s late rise within the tennis world, brief heyday, and precipitous collapse, is a story that begins far earlier than the part seen in the public eye. As even the seemingly-more-casual Roddick admits, the pressures of becoming a top tennis player start even as a tween, and they never stop from there. A top athlete has to be pathological, intense, utterly focused on winning and nothing but winning, and it takes a toll that almost nobody outside that world can truly understand.

The UNTOLD series has succeeded so far because it has the key figures in each story telling it for themselves, and Breaking Point, possibly more than any of the others, needs that perspective. It’s important to hear about Fish’s struggles from Fish himself, but almost more so, it’s important to hear them from Andy Roddick, someone who always projected an image of effortless cool and unflappability on the world stage. Hearing him admit how hard competing at the highest levels can be shows that it’s not one athlete’s struggle; it’s everyone’s.

Breaking Point lands at a time when athletes are more willing than ever to be candid about mental health issues; from NBA star Kevin Love to fellow tennis star Naomi Osaka, there’s a candor that we’ve never seen before, and that’s good for everyone, because it can help destigmatize the struggles for anyone, whether they’re the top American tennis player or someone far from the public eye. It’s a success, and it’s a worthwhile addition to the sports-documentary canon.