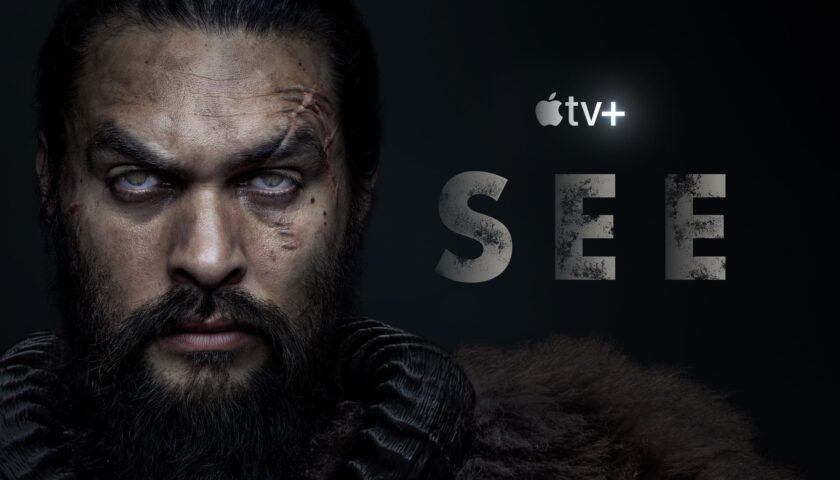 In the dystopian world of the Apple TV+ series “See,” the notion of blindness can be interpreted as a peculiar kind of enemy for its characters to contend with. Where Baba Voss (Jason Momoa) was born, sightlessness is the standard, and sight is a fallacy. No one seems to remember a past that was any different. Survival is the main objective. For Season 2, show creator Steven Knight ups the ante of his post-apocalyptic curio, introducing a flesh-and-blood adversary. If Baba Voss had long been anointed chieftain, now he must face Edo Voss (the inimitable Dave Bautista), his brother, to protect his title.

Now, there are no half measures. It’s kill or be killed.

The addition of Bautista eventually proves its worth. His introductory scene — which canvasses his hulking frame, his face a long-bearded scowl — makes it very clear that he’s beastly and to be utterly feared. If the season’s key art, featuring a literal tête-à-tête of both bad-tempered Momoa and Bautista, doesn’t make it clear, driving the main plot is a dispute between the two brothers.

The tension stems from a long separation that has fractured their individual perceptions of the world and thus a battle for supremacy over it. And the former pro wrestler doesn’t disappoint, bringing a stony gravitas to a convoluted series that’s clearly striving to make its mark as an epic sci-fi legend.

The complexities are upped significantly for season 2. But for those who’ve been playing along from the start, here’s the gist: When we last left Baba Voss, he was en route to the city of Travantes in search of his adopted daughter, Haniwa (Nesta Cooper), who was sold by her outlaw birth father, Jerlamarel (Joshua Henry).

Jerlamarel’s promises to build a sighted utopia were a ruse, when in reality he was selling children to Bautista’s Edo Voss, the general of the armies of Travantes and, as we know, Baba’s brother. Rescuing Haniwa is essentially a suicide mission, so Baba Voss leaves his son, Kofun (Archie Madekwe), and his spiritual guide, Paris (Alfre Woodard) behind, before embarking on the perilous quest.

As if that weren’t enough, there’s also the connected plot that follows Maghra (Hera Hilmar) — Baba Voss’ wife — as well as her mass murdering sister Queen Kane (Sylvia Hoeks) and her Witchfinder (he kills those who can see), Tamacti Jun (Christian Camargo).

There’s plenty going on, and an inattentive audience is bound to miss a key exchange here or there. But that doesn’t always seem to matter. “See” is clearly built as a series that demands repeat viewings.

Its premise has always been a curious, even daring experiment. In a future where humankind has lost the ability to see and is forced to interact in new ways, a set of twins with sight is born, challenging the status quo. More broadly, Momoa stars as the hulking and competent leader of a tribe of humanity that, like all humans, has been forced to evolve to survive in a post-apocalyptic wasteland. When a virus wipes out a much of the population, it leaves sightless survivors in its wake. As the leader of one of the prosperous populations, Baba Vass rescues and marries a pregnant Maghra Kane (Hera Hilmar), who eventually gives birth to sighted twins.

It doesn’t sound like an idea that’s too ridiculous to believe, as many have described it, once it’s fleshed out. But it’s ultimately Palace intrigue, not-so unlike “Game of Thrones,” a series it’s been compared to, although typically derisively. It’s all there: a huge cast, purposeful alliances, scheming and power struggles, queens and renegades, liars and honest men all playing a deadly game for supremacy.

And there’s the unflinching violence, which is supersized in Season 2, right from the start.

The series is undoubtedly bleak. One of its main flaws is a missing sense of hope, which comes across as illogical, given that humanity always, somehow, endures, even in the worst of times (like these). But Knight is relentless. There is excitement to be found in the fight choreography, and even an appreciation for the beauty that lies in this post-apocalyptic society. It’s visually impressive. The landscapes are stunning. The costumes equally. One of its strengths is a vastly multicutural cast, even if the queens, princesses, and lords are still predominantly white. And the acting is credible.

But ultimately, the season belongs to Momoa and newcomer Bautista.

The latter’s ability to give such a brutal character much more introspection than one might expect is surprising. He’s not only his brother’s nemesis, but also a necessary counterbalance to Baba’s equally powerful figure. For an actor whose physicality is often central to the characters he plays, Bautista brings welcome emotion to his role.

Meanwhile, there’s something cool about a hulking Momoa treading around like the hunchback of Notre Dame, or gliding across enemy lines as he feels his way around. It might at first seem humorous, and it. is at times, but, remember, he’s blind. For audiences who’ve seen “Frontier,” and are curious about “See,” expect that ferocious version of Momoa you know and love.

The series gets good mileage out of watching the pair kill people in the most gory of ways, and beat each other up to bloody pulps. It’s absolutely brutal, which obviously won’t appeal to all. At times, the general consensus of “See” feels earned: that it’s a discounted “Game of Thrones.” Maybe it is, maybe it isn’t. But even if it were, what of it? Ultimately there’s really nothing new under the sun. You’re either entertained by it or your not.