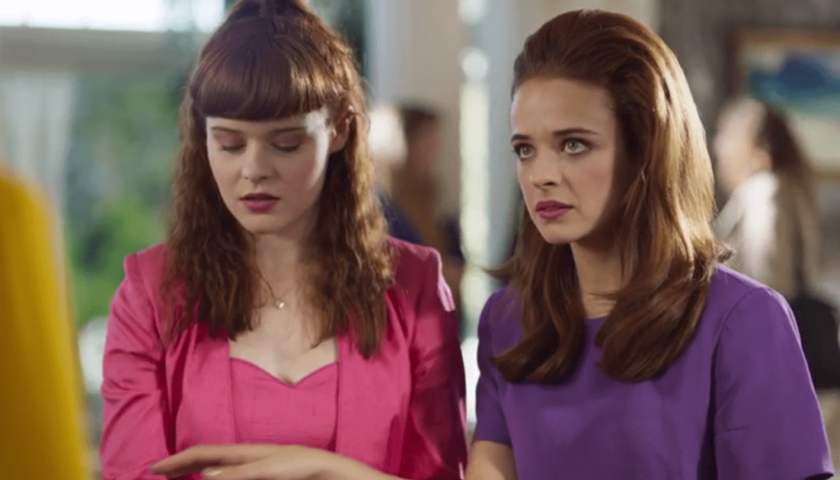 Hidden Jewel finds Ruby trying to find a new life for her children and desperate to protect her beloved daughter from the dark secrets she harbors. Raised amidst the privileges in New Orleans, Pearl (Laporte) aspires to become a doctor, but when an unfortunate accident occurs to one of her twin brothers, Pearl’s dreams are threatened, and Ruby runs, once again back to the bayou. And when one of Pearl’s younger brothers becomes deathly ill, she must journey to the backwaters to find her mother and uncover the mysterious secrets of her past.

The movie begins with a crocodile and a man drowning in the bayou. It is a nightmare teenage Pearl is having the night before her graduation. Pearl is the valedictorian for the class of 1982 and heading to Tulane. Ruby and Beau are so proud of their daughter for all she has accomplished. Her kid brothers Jean and Pierre even write her a sweet poem.

Paige receives a graduation gift from Jeanne, Paul’s sister; it is a book of photos. Pearl recognizes the drowning man from her dreams in one of the pictures. The man is Paul haunting her dreams. Ruby sees it as a bad omen and is worried that Paul’s spirit has cursed them. Paige has a terrible boyfriend named Claude, who tries to have sex with her, and when she says it doesn’t feel like the right time, he calls her a six and breaks up with her. Claude is going to tell everyone they have had sex anyway. Claude sucks. Ruby consoles her daughter and gives her the Gris Gris she has had all these years. The mother-daughter relationship is surprisingly loving with open communication. (Refreshing for Lifetime.)

Ruby is summoned by Nina, who is sick and has a warning for Ruby. She is too late and misses saying goodbye to her friend. Mama DeDe is there will help conjure Nina’s spirit. Ruby is convinced that the bad gris-gris is coming back to haunt her for what she did to her sister and to Paul.

The bad luck comes fast and quick. Jean dies from a snake bite. Pierre then faints from the shock and is unwell. He blames himself. Pierre is admitted to the hospital with a mysterious illness. Everyone in the family blames themselves, actually. Beau is driven to drink whiskey in the daytime, and Ruby is depressed and is so fearful of the back luck, she refuses to visit her son in the hospital. Pearl is left to take care of her family since her parents are worthless.

Pearl thinks that her brother is suffering from broken heart syndrome and talks to a psychiatrist. Meanwhile, Ruby sages the house and does voodoo magic to try to get things right. Ruby asks Pearl to go to the cemetery with her to summon Nina’s spirit. Pearl doesn’t believe her mother and gathers some of Pierre’s things to help him recover.

Ruby goes back to the bayou to find out what is curing her family and then atone for it. She leaves a note that suggests she may not come back alive. Pearl is concerned and goes after her mother. Her search is cut short when she gets word that Pierre is unwell. Beau rushes to the hospital her trips on some stairs and falls, needing immediate surgery. Pearl is the next of kin for Pierre and agrees to an antibiotic IV for his sepsis.

John, the hunky groundskeeper of the old Cypris mansion, spots Ruby and calls Pearl to track her own. They search through Cypris woods and then they spend the night old house. Pearl is haunted by Paul in her dreams again and attacked by a spider. To feel better, she spoons with John in the candlelight.

Next, Pearl decides to visit aunt Jenne and Gladys. The family reunion doesn’t go well. Gladys thinks that Ruby is getting all the bad gris-gris that she deserves.

A storm rolls in. Josh and Pearl are stuck in his disheveled bachelor pad. He makes her spaghetti with tomato sauce and adds some spice to it. Then they add some spice to their relationship and have sexy time. The following day John wears just a towel, and while Pearl tells him, it was her first time. They are so in love.

Buster, the alcoholic/rapist, tricks Pearl into being alone with him. He tells Pearl that she is going to be his wife since Ruby never made good on her promise. Buster tries to lock Pearl in a cage, but she fights him off, locking him in his own cage. The police arrive and arrest Buster. Good riddance.

Ruby is found in a room full of candles, and she is painting. She is spiraling. Pearl tells her mother that Paul is asking for help in her dream, not looking for vengeance. Ruby is inspired and paints while in a trance-like state. They take the painting and meet up with Mama DeDe.

Mama DeDe does some voodoo magic. Ruby makes amends with Paul and tells him that she did love him. Then she burns the painting, and the smoke rises up, which means all is forgiven. The past is let go.

With all that out of the way, Ruby can finally visit her sick son in the hospital. Mama DeDe says he may not make it, but the decision is up to him. Ruby pleads with to hand on and fight. During the witching hour, Pierre comes to and is on the road to recovery. The doctors are baffled.

John builds Paige a home and she goes off to medical school. Seems like everyone is going to be okay! A Happy ending.