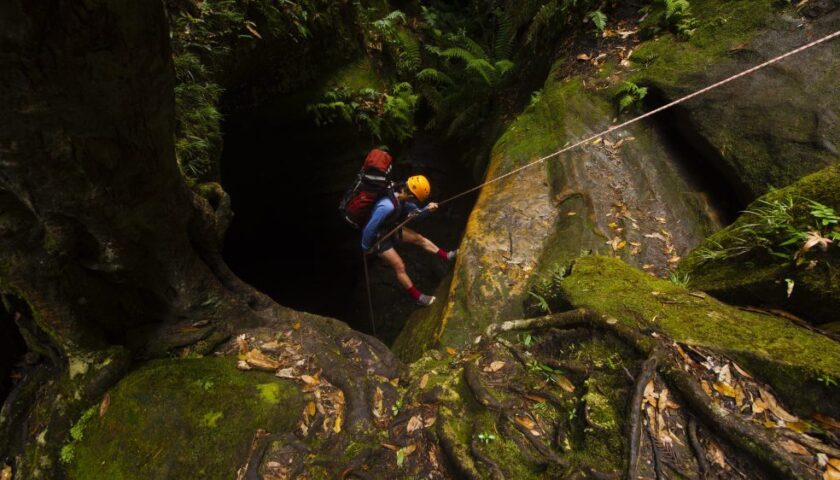 We hear a ship horn, and the screen splits to show us a buoy. “One of the biggest global races in history is about to begin,” says narrator Chris Payne Gilbert.

Race To The Center Of The Earth has four teams of three people start their part of the race in a different corner of the planet. Over 13 days, the group will run their courses, hitting required GPS waypoints on the day’s route. The goal during each leg of the initial journey is to beat the time established by adventure researchers. If they beat the time, the team can get 1 or 2 points for the leg, depending on how early they are to the finish. If they meet the time, they get no points. If they have to be “swept” off the course, meaning the producers have to take over and get the team off the course because they’ve taken too much time and are likely exhausted, they lose a point.

The idea of the points is that the team with the most points will have “pole position” for the final race that comes after the 13 days, where the teams race against each other on the same course, to reach a buoy with $1 million underneath it.

The starting points for each team: Quebec, the southern tip of Argentina, a city in Sibera, and South Vietnam. Each team, consisting of athletes in tip-top shape, face different challenges during their first two days. The team in North America has to spend the first two days climbing “The Big Wall” on Cape Trinity, whereas the other three teams have similar experiences to each other; they hike and bike and ride SUVs to their destination points, often getting lost or missing waypoints along the way. But, despite setbacks, all of the teams gain points during the first two days, just some have to work harder than others.

We really appreciated the way that the producers of Race To The Center Of The Earth really lean into the look of the show. The photography is not only beautiful, really giving viewers the beauty and scope of the locations where these teams are competing. Also, the camera and sound crews are right there with the adventurers, giving up-close views that aren’t just from GoPros strapped to someone’s backpack.

During a rock-climbing scene, for instance, there is an aerial shot of the team leader, who is struggling mightily to get up the rock face, on a parallel line with a camera operator, who has positioned himself higher than the contestant. So there is a real effort being made to show just how difficult some of the physical challenges are and how much the contestants are struggling.

It’s kind of too bad, though, that the contestants seem to be a generic mix of weekend warriors, most of whom have shockingly the same skin color. Out of the nine contestants, only two are people of color, and the only Black contestant talks about “representation” as the reason why he wanted to participate. Of course, “participation” would be better if there was a more of a mix of people, and it would make the show a whole hell of a lot more interesting.

The contestants seem to be shown in the initial interviews with a bit of personality, but as the first leg of the race goes on, all we hear are people trying to  bark orders at each other while not being confrontational, trying to console someone who made a mistake with soothing language, and being “stoked” about what’s next.

There were a few times when the contestants got real during their confessional interviews, like when one woman admitted that she didn’t know her brotastic teammates very well and was afraid of slowing them down given that she was ten years older than they were. Another woman admitted that her boss/team leader’s positivity could be stifling at times. But for the most part, we saw a lot of generic encouragement and not a lot of sniping under pressure. Maybe that will happen later, but for now the scenery is way more interesting than the interchangeable contestants, and that’s not good.

It doesn’t help that the rules are cumbersome as hell. The points system is convoluted, as is the “sweeping” of a team off the course if they fall too far behind. We also don’t quite get the idea that no one has any idea what the other teams are doing because they’re thousands of miles away. The pauses where the narrator explains pieces of the game slow things down tremendously. It’s one thing to explain the game, another to explain it many times.