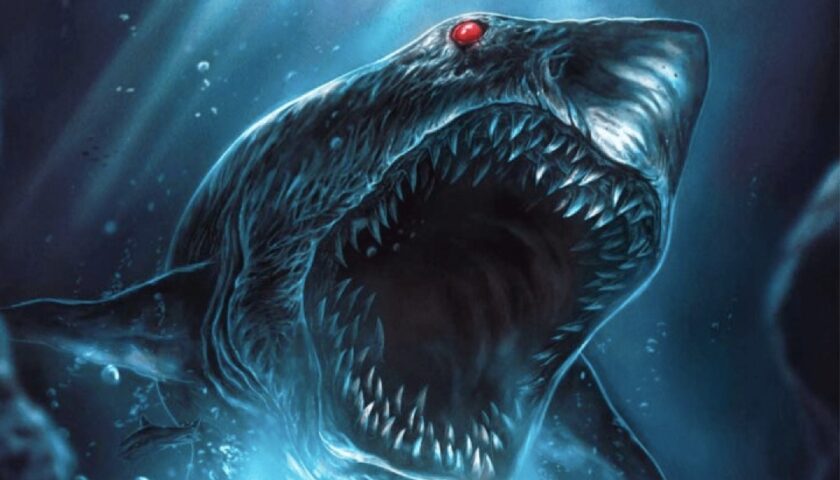 After Amityville Island and Shark Encounters of the Third Kind, there was a rumour going around that sharks were planning to take out a restraining order against Mark Polonia. It must have been denied because now he’s back with Virus Shark. Yes, a mash-up of pandemic thriller and shark attack horror. Can he surprise me like he did with Return to Splatter Farm, or will this be the second bad shark movie after Killer Shark I’ve seen in a week?

As a result of a shark attack off the Australian coast, SHVID-1 is spread from sharks to humans. As a result of people’s unwillingness to stay away from the beaches, it soon becomes a pandemic. Now the five crewmembers of the underwater Cygnus Research Facility are Earth’s last hope. Shark expert Kristi (Jamie Morgan, Arbor Day), security goon Duke (Ken Van Sant, Sharkenstien), Greg (James Carolus, It Kills, Land Shark) the disease specialist, chief engineer D’Amato (Steve Diasparra, Frozen Sasquatch, Queen Crab), and Anne (Danielle Donahue, Survival Knife, Muckman), another researcher. They all report to Shannon Muldoon (Sarah Duterte) who is back on dry land.

Despite what could be a breakthrough, things don’t look good, however. The sharks they have for research are becoming more aggressive and Rikter has found seawater leaking in. And tensions among the researchers are about at the boiling point. Then, within minutes of each other, the cadaver Anne is studying mutates and attacks her. And Duke is bitten by an infected shark.

Virus Shark is actually an amusing blend of everything from Deep Blue Sea to Deepstar Six, Warning Sign and cannibal films. The script, credited to Aaron Drake is just silly enough that you don’t expect it to make a hell of a lot of sense. And it doesn’t, but it stays just coherent enough that it doesn’t contradict itself either.

This is a Mark Polonia film, so you can expect the usual lack of caring about details, however. Virus Shark’s undersea lab is obviously shot in a school, you can see kids’ artwork on the wall and the shark tank is a swimming pool. Not to mention an engineering room that’s obviously a low tech maintenance room.

The filmmakers had the good sense to get out of there fairly quickly and the last twenty or so minutes take place on dry land. But it’s obvious the survivors surfaced on the shore of a lake with the sound of the non-existent waves dubbed in. By now though that’s to be expected and probably part of the attraction to his fans.

The effects are also about what you would expect. The makeup for the mutated Ann is fairly good, though the mutants we se later are obviously rubber masks. Some of the miniature effects have the feel of 1960s Italian sci-fi films like Wild, Wild, Planet and Snow Beasts to them. It doesn’t mean they’re good, but it’s a nice bit of nostalgia for those of us who grew up watching them on TV.

As for the sharks, the CGI ones range from acceptable to laughable. The prop infected ones are just plain laughable. If you’re a fan of Polonia’s films you know to expect it, if not now you’ve been warned.

Virus Shark isn’t a great film, and no, it doesn’t measure up to Return to Splatter Farm. But it is entertaining and unlike so many of Polonia’s films, I didn’t have to fight the urge to turn it off either. SRS Cinema has released an extremely limited of Virus Shark Blu Rays and VHS tapes. There are a few left and you can order them from the SRS website. A wider release is planned for the spring, probably via Wild Eye.