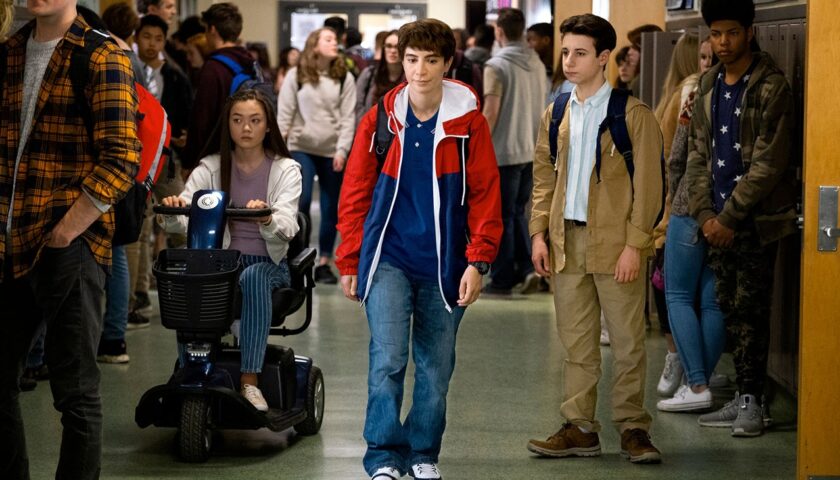 Thought I’d give this new series a try, recording it after a basketball game Saturday night, March 27.

It appears to deal with a high school freshman with the school year beginning the day after he gets his braces off. The opening scene has Chad saying some of the nastiest things to his orthodontist, in public, in front of his mother, who does nothing to stop him, or to apologize to the doctor, who does nothing more than say “I’m sorry to hear that.” So right away we have a crude, rude, 14-15 year old and two adults who don’t know how to behave like adults.

At home, Chad is needlessly rude to his sister, and rather rude to his mother, complaining that she’s dating a Muslim. (Of course she’s divorced, except for Last Man Standing, what sitcom characters are happily married.) The surprise to me was when “Mom” says, You do realize we’re Muslim, don’t you?” What this line does is make Chad’s complaint 100% unbelievable. Whatever his reasoning was, he would not complain the way he did about who she is dating without explaining his complaint right away. If he’s got two working brain cells, he would know that complaining that she’s dating someone of the family’s faith makes no sense on the surface.

The show is so awkwardly filmed that in that early kitchen scene, there’s a man in plain view who has no lines, who nobody seems to acknowledge. I thought it was Chad’s father until they began talking about her dating some guy. Maybe it was a stage hand who forgot to get off the set. Now I’m sure he will be introduced some other time, but have you ever seen a TV show before, where inside a family’s home there is a person nobody talks to, who says nothing when it wasn’t some sort of party scene full of extras?

Somehow I persevered. Chad is bossy with his buddy as they await the school bus-which is so short it’s like a toy bus. When they arrive at school, he speaks briefly with a student riding an Amigo, then he rudely steps right between her and her steering wheel to head toward the building. Once inside, Chad goes up to various people he doesn’t know and interrupts their conversation, as if he thinks they are happy to have a stranger interrupt them saying stupid things of no interest.

He tells two girls “I had sex this past summer.” Seriously, this guy is so stupid as to think they want to hear that from a stranger. Later, in the gym, even though it is supposed to be the first day of the school year, he and his buddy are aimlessly shooting a basketball toward the rim while discussing Chad’s bizarre choice of conversation topics.

Chad is upset because his buddy is pointing out that Chad has never even kissed a girl. Chad thinks the girls will respect him because of his sex story. His buddy seems barely able to hit the rim from about 10-12 feet away. Chad shoots worse than the average kindergartner. I believe we saw him shoot the ball four times from that short distance and the closest one fell harmlessly to the floor about six feet short of the rim. His last shot was not only short, but it was as least 7 feet wide of the basket.

There was nobody else in their area. I never saw a gym class where two boys had so much time to kill all by themselves. Eventually someone blew a whistle and they were set up with little cones that everyone was supposed to go through-first on the left, then on the right, while dribbling. Chad is so unbelievably uncoordinated that he bounced the ball with both hands once and it bounced away from him, then he proceeded to just plow straight ahead knocking over every cone in the line.

Then some other guys come up, and while in a classroom-again, this school seems to have a weird policy of letting folks mingle in unattended classrooms. I guess it was between classes. Since nobody else was coming into the room, I guess they have 15 minutes between classes. Just nothing about this show seemed like the real world. They heard his “sex” story and ask him about it. He proceeds to give all the juicy details of this made up escapade, using semi-crude language, and the scene goes on for…

Well, I don’t know. It went on for at least a minute before I said, “Check please,” which is my way of announcing (to myself, the cats, someone) that I’m done with this program.

Perhaps there are some 14-year-olds who want to hear a guy describe an imaginary sex adventure. But I think any 14-year-old who tuned in to this-it started after midnight-probably laughed about how stupid and un-likeable Chad is that he gave up before it got to this point. I really don’t see how older people would care to watch this show at all. If you rule out all the people 15 or older, and certainly few people under the age of 12 would find this show the least bit interesting, you are left with a very small target audience.

Maybe viewers are supposed to enjoy seeing this horribly nasty kid get humiliated and ridiculed and whatever every week. That would seem to be the only reason you’d care to watch. There certainly is no reason to want anything good to happen to this teen. If this series becomes a hit-assuming the rest of the scripts are similar to the one I saw part of-it will be amazing. I feel I’ve earned myself at least three fewer hours in purgatory by putting up with this garbage as long as I did. IMDB won’t let me score is less than one, so that’s what it gets.