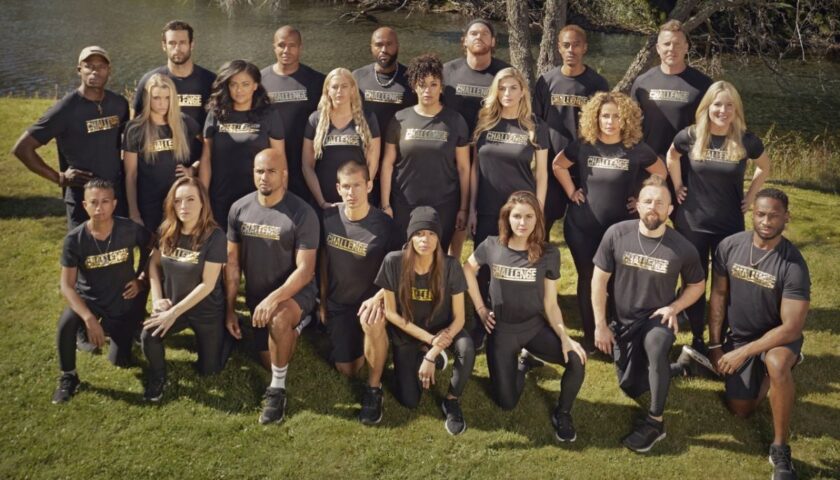 Scenes from previous seasons of The Challenge, with host T.J. Levin’s voice saying, “The Challenge is the most thrilling competition series ever created.”

The Challenge: All-Stars is just what you think it is: A new season of the MTV staple, completely populated with previous contestants. Eleven men and 11 women, most of whom participated in the show from its earliest days as the Real World/Road Rules Challenge. It’s not a team competition; each contestant is playing for him or herself. The winner gets a cool $500,000.

How old are these contestants? Mark Long from the first Road Rules in 1995 is back for the umpteenth time, as is Beth Stolarczyk from the 2nd Real World season way back in 1993 (Beth has been in so many Challenge seasons, we’ve lost count). Other favorites include Trishelle Cannatella, Syrus Yarborough, Ace Amerson, Teck Holmes, Ruthie Alcaide, Laterrian Wallace, Jisela Delgado, Yes Duffy and more. Levin is back as host.

Most of these contestants were on Challenge seasons in the ’90s and ’00s, when a) they were much younger and b) the challenges weren’t nearly as physically demanding. So not only do they have to get used to an everyone-for-themselves dynamic, but they also need to face a much physically rougher contest.

The first challenge has the 22 contestants splitting into two teams and naming a male and female captain. They have to solve math equations on a podium, then dive into a frigid lagoon in order to find chained-down blocks with the answer on them, corresponding to the copper or silver color of the team they’re on. If they have to tap in someone else to finish that round, the team gets a five-minute penalty. The first to solve the final equation wins.

If you’ve been a fan of The Challenge all along, there is nothing about this version that will make you long for the other seasons. This season, which Long pitched on social media last year and where he serves as one of the executive producers, has the same brutal challenges as the show has had through the ’10s, but the contestants are mostly old favorites from the ’90s and ’00s.

That dynamic makes it enjoyable for people like us, who haven’t really watched the show since its earliest days. How can these contestants, mostly in their 40s but some, like Beth, in their 50s, handle a contest that would wipe out people in their 20s?

Despite how convoluted the first challenge is — Math? Finding the right-colored number in a murky, freezing lagoon? — it’s entertaining from the perspective of watching these middle-aged contestants try and fail to navigate it. Most of the contestants had no idea how tough it would be, right from the outset, and seeing them struggle to even get 30 feet into the lagoon for some reason made our couch-anchored middle-aged asses feel better. Bunim-Murray Productions knows this, which is why the soundtrack is filled with “old people” music ranging from Foreigner to Bush.

Of course, it’s also good to see some of these people again. We get to see Beth, who loves herself some camera time, call Nehemiah Clark her “Tenderoni” once again, and laugh as Nehemiah ignores her. We see Latterian try to redeem himself after a defeat. We see Ace getting ganged up on and talking about how “evil” everyone’s going to get with money on the line. We see Jisela stumbling out of the transport shuttle when she first arrives but then kick ass during the challenge.

It’s going to be an interesting show when we get down to the last few contestants. How will this now-friendly dynamic between everyone break down?