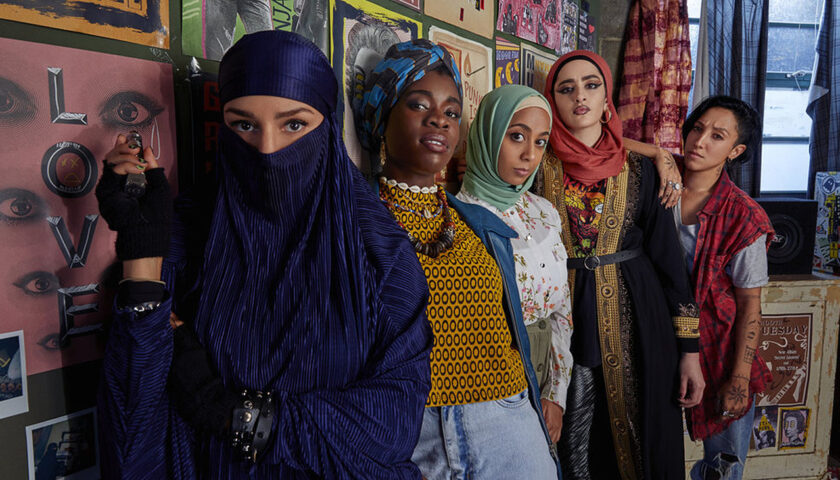 If you’ve finished Girls5Eva on Peacock and are looking for something to fill the girl-group sized hole in your heart, consider We Are Lady Parts, the streamer’s latest comedy about an all-female band. Whereas Girls5Eva was a goofy-smart spoof of femininity and pop culture nostalgia, Lady Parts — created by British writer/director Nida Manzoor — is an edgy blend of punk-rock feminism, whimsical humor, head-banging tunes, and relatable tales of romance and friendship.

Amina Hussain (Anjana Vasan) thinks it’s time to get married. She’s 26, a PhD student in microbiology, and the only one of her Muslim friends who is not yet married or engaged. But the men she meets are looking for a woman with few outside interests besides making them happy, and Amina is a passionate and gifted guitarist. “Music is haram!” glowers one severe suitor (Mikhael DeVille). Even Amina’s friends think she needs to squelch her “music obsession” in order to find a mate. “Do you think any self-respecting, God-fearing Muslim man would want to marry you if he knew you had this old white man on your wall?” scolds her BFF Noor (Aiysha Hart), gesturing to Amina’s poster of Don McLean.

Elsewhere in London, the all-female, all-Muslim band Lady Parts grinds through a guitar-heavy anthem called “Ain’t No One Gonna Honour Kill My Sister But Me.” The song rocks, but Saira (Sarah Kameela Impey), the band’s uncompromising leader, thinks their sound is far too “thin” to win a spot in an upcoming showcase. Lady Parts, Saira decrees, needs a lead guitarist. As you might imagine, circumstances contrive to bring the ladies of Lady Parts together with Amina — who, I should mention, also has debilitating stage fright.

We Are Lady Parts (premiering June 3) follows a fairly standard story-of-a-band narrative: The meeting, the struggle, the triumph, the career-threatening disaster. Still, the series itself is charmingly original. As different as Amina is from Saira and the rest of Lady Parts — nurturing bassist Bisma (Faith Omole), combative drummer Ayesha (Juliette Motamed), and their mysterious, niqab-wearing manager Momtaz (Lucie Shorthouse) — they’re all Muslim women who are chafing against expectations, both society’s and their own. They don’t sing in a band to mock their religion; all of them respect and follow Islam. Lady Parts makes music to remind the world that they’re not your typical Muslim girls — because there is no such thing.

Manzoor broke through on the UK television scene through the Channel 4 “Comedy Blaps” pilot contest — the same program that launched Michaela Coel’s Chewing Gum in 2015. Like Coel, Manzoor has a singular vision that brings fresh energy to her characters’ relatable stories. Amina copes with her alienation and loneliness through elaborate fantasy interludes. Scarves come to life and sing back-up as she croons “Man of Constant Sorrow” in her closet; an awkward coffee-shop encounter with a suitor transforms into “Rate My Date,” a game show where “an esteemed panel of absolute randomers will determine if Amina is worthy of love.” With her expressive eyes and jittery mien, Vasan brings an authentic charm to Amina whether she’s playful, thoughtful, or rageful.

The entire ensemble, all of whom play their own instruments, are natural performers, and there’s a joyful energy to their jam sessions. The original songs — written by Manzoor and her siblings Shez Manzoor, Sanya Manzoor, and Benjamin Fregin — balance humor with earworm hooks, from the shock rock bluster of “Voldemort Under My Headscarf” to the sexy funk of “Bashir with the Good Beard.” (Stream them now on Spotify!) After a social media influencer (Sofia Barclay) books Lady Parts a gig at a traditional (read: very white, very male) pub, Saira surveys the sour crowd with a smirk. “Here’s a little something we thought you might like,” she purrs, before the band explodes into a rowdy rendition of Dolly Parton’s “9 to 5.” The stony silence of the crowd only fuels their power: Who gives a f— what these old white dudes think? A terrified Amina nails her guitar solo, and the band fills the quiet void with defiant squeals of triumph. It’s a jubilant moment of liberation that transcends the screen.

Like any good punk song, We Are Lady Parts is short, intense, and unapologetic. The 6-episode run only allows for glimpses into the characters’ personal lives: Saira’s fear of commitment and estrangement from her family; Ayesha’s identity as a queer Muslim woman; Bisma’s work-life balance as a wife and mom. Though the 6-episode series leaves Lady Parts on a high note, it would be a shame if they didn’t get a chance to play an encore. Grade: B+