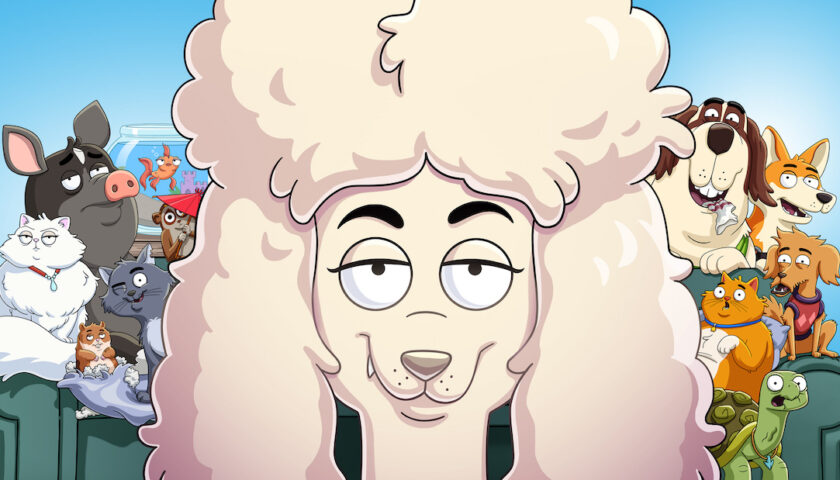 The bizarre Oscar win for Netflix’s My Octopus Teacher was a helpful reminder that there’s almost nothing that Hollywood loves more than anthropomorphizing animals and giving them human psychoses. For what it’s worth, that amiable cephalopod wanted no part of that dude’s midlife crisis and would have been far happier to go about its brief life without daily interruptions from a pervy aquatic voyeur.

On the small screen, our obsession with getting inside the mind of animals, especially our pets, can be seen everywhere — from HBO’s appropriately titled Animals to the beloved duo of BoJack Horseman and Tuca & Bertie to ABC’s gone-too-soon Downward Dog. When I see an eager-to-please puppy or an eager-to-irritate cat in real life, I no longer know if the voices and motivations I’m giving them in my head are spontaneously generated or the clever idea of a writer who spent too much time staring at their fur-baby.

There have been enough good entries in the genre that it’s hard to cut through the clutter, and Fox’s new animated comedy HouseBroken is far from revelatory or even all that specifically insightful. It is, however, cutely animated, sporadically clever and it boasts a dynamite vocal cast. Plus, it doesn’t feature a single underwater photographer caressing an octopus tentacle.

The show’s centerpiece is Honey, a standard poodle who operates a regular support group for the neighborhood animals. Because Honey is voiced by Lisa Kudrow, I immediately started thinking of HouseBroken as Web Therapy with a colorful menagerie, whether or not that was the reference point for creators Gabrielle Allan, Jennifer Crittenden and Clea DuVall.

Chances are good that at least one or two of those descriptions made you giggle, and who wouldn’t be amused by hearing the words “I prefer not to be limited by the good dog/bad dog binary; it’s a spectrum and I live somewhere between compliant and frisky,” coming out of the mouth of a corgi? That’s just about the smartest line in the episodes I’ve seen, which rely more heavily on “Yeah, that’s an amusing idea!” than “That’s an amusing idea, now what can we do to actually make it fresh or funny?” or “things that would sound silly coming out of a pig’s mouth” than “things that are actually clever.”

That’s without even getting to easy-touch jokes like those directed at Honey’s housemate Chief (Nat Faxon), a St. Bernard who enjoys farting and hates the sound of sirens. With the possible exception of Nibbles, who may have killed her mate and eaten its face, the characters all have problems that are relatable in human terms — separation anxiety, poorly managed grief, difficulties with boundaries — without ever being so serious that you wish they’d get help from somebody more qualified than an unlicensed poodle. That is to say that as maladjusted animal comedies go, this is mental illness-lite, not BoJack or Tuca & Bertie.

Reenforcing that this is an instantly accessible, if frequently low-brow, take on otherwise potentially dark subject matter, pet vomit is a key plot point in three of four episodes sent to critics; the fourth used a pet’s anxiety about pooping inside the house as its A-story. Low-brow doesn’t mean all-ages, mind you, because some of the turtle-on-footwear humping that takes place in HouseBroken is more than most parents will want to explain to the youngest of children. That could cause problems since the Bento Box animation will make kids want a Nibbles of their own, face-eating notwithstanding.

Those four episodes sent to critics also appear to be non-sequential, which normally wouldn’t be a problem for an animated show, but HouseBroken is slightly more serialized than I was expecting; some character inconsistencies and variations in tone and episodic quality may be smoothed out in context. I liked the pilot and the fourth screener, a late-season episode incorporating a parlor murder mystery, significantly more than the middle screeners.

Either way, the instantly embraceable animation and great vocal cast — Kudrow, DuVall and Webb were my early favorites — point to ample potential and the possibility that the show’s take on “This is what your pets are REALLY thinking!” might sooner or later advance into something more interesting (and a bit funnier).