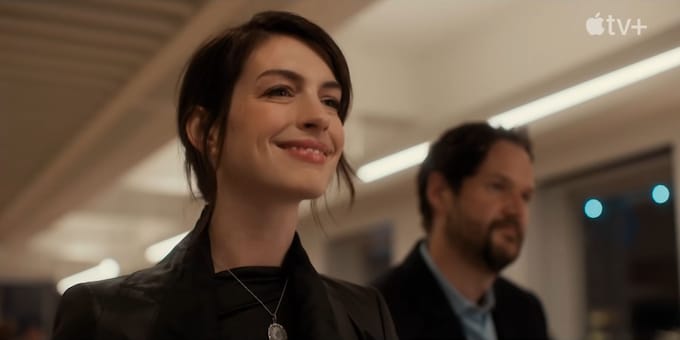 Tech grifters are the flavor of the month, it seems. Hot on the heels of Inventing Anna, The Dropout, and Super Pumped comes WeCrashed, an eight-part Apple TV+ limited series chronicling how WeWork’s founders flourished and then failed. Each show is another 21st-century spin on the American Dream; however, the love story between Adam (Jared Leto) and Rebekah Neumann (Anne Hathaway) sets WeCrashed apart from the other cult-of-personality offerings currently vying for our attention. The central performances (particularly Hathaway’s) are captivating and the community element is a compelling thread running alongside the Neumanns’ wild excessive spending. The slick cautionary tale is an enjoyable ride that plays into the eccentricities of the couple, but its glossy veneer can’t hide its shortcomings. No doubt, opinions will also vary depending on how much tech grifter fatigue you are experiencing.

Upfront, I do want to note that I haven’t listened to the hit podcast WeCrashed: The Rise and Fall of WeWork, which is the foundation that showrunners Lee Eisenberg and Drew Crevello used for the series. Nor have I watched Hulu’s 2021 documentary WeWork: or the Making and Breaking of a $47 Billion Unicorn, so my prior knowledge of this story was fairly limited to the headlines. As with most dramatized adaptations of real events, it opens with the downfall before turning the clock back to where it all began. It does bounce around the timeline throughout, but at no point is this unnecessarily confusing or trying too hard to conjure up a mystery out of this well-documented corporate spiral.

From the first moment Adam and Rebekah Neumann enter the frame as the overly pampered duo, it is evident the casting department has nailed both choices. Hathaway’s theater kid energy has led to unearned scorn and eye rolls, but her ability to dial it up and then pull it back where necessary is perfect for the “woo-woo” beliefs and out-of-touch comments Rebekah consistently makes. Her tantrums lean into camp at times, but it isn’t all over-the-top demands, and Hathaway believably captures Rebekah’s desire to be recognized for something. One running thread is that people constantly mention her famous cousin — which is particularly hilarious during her wedding — while Rebekah constantly tries to assert her position beyond her famous family members.

Rebekah finds it hard to grab attention when her husband is by her side, but this is not a problem shared by Hathaway. Her deeper monotone accent is pretty spot on to the real Rebekah, and the Oscar-winning actress steals the spotlight whenever she is on screen. Similarly, while Leto’s “It’s-a-me, Mario!” cadence in House of Gucci made his screentime cartoonish in that Ridley Scott movie, he has a much better time with his interpretation of Adam’s Israeli accent here. One somewhat distracting feature is his prosthetic nose, which makes him look like an uncanny valley version of himself. It isn’t as face-changing as his Paolo Gucci transformation, but you can still tell that something’s off, and it’s a little distracting before you become accustomed to the slight shift. Leto is charismatic in the role, though, and it is hard to imagine another actor capturing the child-like enthusiasm and deeply narcissistic confidence in whatever he is trying to sell, no matter how ridiculous. Early ventures, after all, include collapsible high heels and knee pads clothing for babies.

What he ultimately ends up pitching is the concept of community through the notion of office space, which turns the work environment into a frat house of sorts, complete with foosball tables, a fully stocked bar, and “Hustle Harder” neon signs. T.G.I.M. (Thank God It’s Monday) kicks off the week and the rallying “WeWork” chant definitely adds to the cult-of-personality vibe. The third episode, “Summer Camp,” is a highlight, which explores the dark side of this office setting, while also shining a light on Rebekah’s anti-feminist statements that caused one early rupture in the “utopian” set up. It is disappointing that some of these themes aren’t revisited beyond a cursory mention, as the office dynamic is one of the most fascinating (and bleak) parts of this story.

Another shortcoming is that most of the supporting characters are never explored in depth and are very much props in Adam and Rebekah’s story. The Neumanns are clearly the stars of this fallen empire, but by the end of the eight episodes, co-founder Miguel (Kyle Marvin) is still pretty much the same blank-slate stable figure of when we first meet him. America Ferrera’s terrific turn as Elishia Kennedy taps into the Leaning In vibes of the era with nuance that goes beyond “#girlboss” buzzwords. Elsewhere, O-T Fagbenle is a fun, stuffy British thorn in Adam’s side as he tries to reign in the excessive spending on behalf of the board.

Standout ingredients include Amy Williams’ production design — particularly the WeWork office itself — that adds to the glossy portrayal of this anything-goes aesthetic. Katy Perry’s “Roar” is woven throughout, which captures both Adam’s overblown ego and playful elements of his personality that some could not resist. As a viewer, it is wild to see everyone fawn over his overconfident demeanor, but part of the appeal of shows like WeCrashed is knowing they are being duped.

Ultimately, it is the Adam and Rebekah show, and thankfully the writers are not trying to paint an overly sympathetic portrayal of their epic fall. At no point are we meant to think this couple is actually changing the world through their outlandish and unrevolutionary idea. Between their belief in manifesting whatever they want (it is less the power of the mind and more the power of the dollar) and Rebekah bouncing from one career to another, it unfolds as a cautionary tale instead of one that advocates their antics. “You’re a supernova” is Rebekah’s repeated assertion to her husband, but in this portrayal, it is Hathaway that earns this crown.

WeCrashed is the fourth limited series to hit TV screens over the last month that explores the figures at the center of recent real-life tech scamming scandals. There might be some level of audience fatigue, and your interest levels may vary depending on your media consumption of this particular rise and fall. However, there is a lot to enjoy in this slick production, and Anne Hathaway, as one half of the WeWork couple, is a force to be reckoned with. It is a cult of personality duel between Hathaway and Jared Leto as Adam and Rebekah Neumann, but the Oscar-winning actress is the victor that steals the spotlight whenever she is on screen.