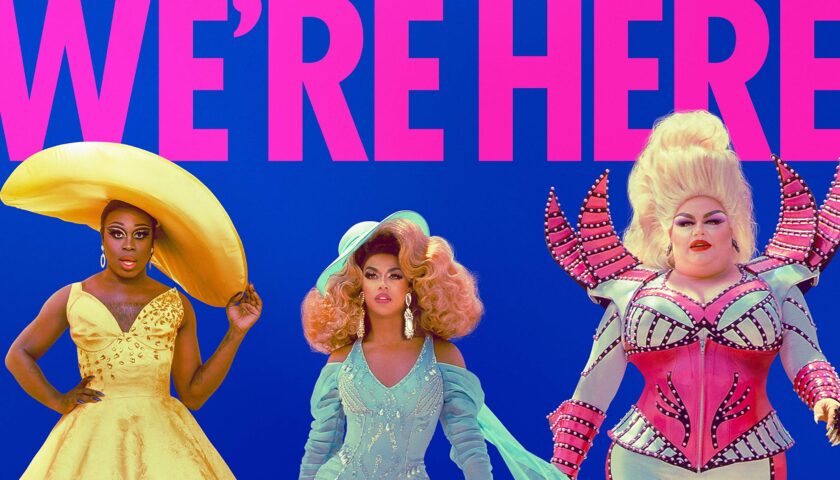 When Peter LoGreco was approached for We’re Here, he was initially reluctant to get involved, as the HBO series’ director and showrunner.

Created by Johnnie Ingram and Stephen Warren, the reality series would center on Bob the Drag Queen, Eureka O’Hara and Shangela—former contestants on RuPaul’s Drag Race—following the trio on a journey across the U.S., as they recruited small-town residents to participate in one-night-only drag shows.

As LoGreco notes, there was no shortage of drag-centric shows on television prior to We’re Here. So the question was, could this one bring something new to the table? “I came at it thinking, ‘This isn’t necessarily something that I want to do if it’s a competition show, if it’s just taking drag to amateurs and trying to get them to do a full-on drag show,’” the EP recalls. “I think that would be really, really fun to watch, in and of itself, and I think we have a real component of that. But I sat down with the EPs, thinking, ‘That’s what they’re after. I’m not sure about it.’”

Fortunately, in his meeting with the series’ EPs, LoGreco found his preconceptions of the project to be incorrect. In point of fact, everyone on board shared his instinct, in terms of what the show should explore, and how it should be framed. “We ended up getting into a very fruitful and interesting discussion, more about the genesis of drag, and its meaning for the queer community,” he says. “It [was] about, what are the ways in which we can shine a light, not only on the power and roots and soul of something that’s become as fun and mainstream as drag, but also use that as a medium by which we can start to address the tremendous division that is being promoted, in a lot of ways, and taken advantage of in our society right now?

“I think we all arrived at this idea that that was something really substantive,” LoGreco adds, “that then also had this really wonderful wrapper, that was full of the ability to explore craft.”

With LoGreco at the helm, We’re Here would be a “smashing together of genres”—a reality series, crafted with a documentarian’s sensibility. “We have a little bit of this soft, scripted reality thing that we’re playing with—hopefully shooting and crafting [it] in a different way, but definitely referencing that form,” he says. “Then, we’re looking at documentary, in terms of exploring scenes that talk about the town, that talk about the individual people with whom we’re working in the town, and then the performance aspects.”

Over the course of its six-episode first season, the series travels to Gettysburg, Pennsylvania, Twin Falls, Idaho, Branson, Missouri, Farmington, New Mexico, Ruston, Louisiana, and Spartanburg, South Carolina, focusing its lens on people one might not expect to see in drag. Participants included queer individuals embracing their identity, heterosexual allies to the LGBTQ community, as well as parents attempting to redeem themselves in the eyes of their child, following past incidents of homophobia.

For LoGreco, creative casting was one crucial facet of the overall vision for We’re Here. “[But] there were no quotas. It wasn’t like, ‘We need to have one gay person, one straight person, one questioning person, or one relative of a gay person,’” he explains. “It was really just like, who are the people who understand enough about this, but also stand to gain and learn a lot, and have something potentially enlightening happen for them?

“We really wanted to go beyond the idea that drag was simply a performance art that showed how well you could dance, how well you could lip-sync, and how awesome you could look in a corset and a dress,” he adds. “[We wanted to show] that it was so much more than that, and that the potential to gain something from it, and the potential to have people really enjoy seeing it unfold, could grow from what someone’s personal story is, and what the stakes are for them, getting up there in drag.”

On a logistical level, tracking down participants for We’re Here involved a lot of research, reading and community outreach. “What we found was that one way or another, we’d find a story that took us to a town, or we’d find somebody who had a voice on social media through one of our connections, where they were talking about their experiences as a queer person,” LoGreco says. “That was almost always the starting point.”

In each city featured, the production team hit upon a network of people who were trying to understand and forward the cause of LGBTQ tolerance and acceptance, however conservative the community as a whole might be. “There was usually a leader of some kind or another—a facilitator—and connecting to that person all of a sudden opened the door,” the showrunner notes. “Whether or not they ended up on camera, they were a really important part of our creative process, especially in terms of casting.”

Once locations and participants for Season 1 were chosen, LoGreco had to figure out how to put together drag shows in each city, with all the logistical hurdles involved. “That was one of the most fun things to do,” he says, “and one of the newest things for me.”

For the EP, it was important that each drag show felt specific to the series at hand. “We wanted to try to give [each one] its own very particular look, and feel, and life, given how well drag shows have been represented in other television series,” he says. “We thought there was something more to do with that.”

Part of lending each show the right feel involved tracking down the appropriate venue. “We didn’t want to just go into a big theater and have it look like a stage show. We wanted it to be grassroots-feeling, like it was of and part of the place,” LoGreco says. “There was always a challenge in finding that location that had the ability to let us build a stage, if we needed to—to light it, take the time to rehearse, [and] not have them be freaked out by the fact that they were putting that out there as something they supported, within whatever community it was.

“At the end of the day, other than in Branson, [that] was actually a lot easier than we thought it would be,” he adds.

From LoGreco’s perspective, it was also critical for each show to come together organically, as a reflection of the performers involved. Ultimately, every decision—whether it was the costumes they wore, or the songs they’d lip-sync to—was made with the individual in mind. “We didn’t want to create a drag show based on a preconceived notion of who this person was. We wanted to really see that process unfold,” he says. “We wanted to see the queen discover stuff about this person; we wanted to give them enough information, so that they had a starting point, but also little enough information, so that they could form their own opinions and ideas about what the performance should be.”

Staging the drag shows was a major challenge for LoGreco, as a director, given the fact that he had limited experience shooting live events. Nonetheless, he was intent on innovating within this space, “[pulling] away from the convention of how a live event for television is shot.”

For LoGreco, the way in which the series has been embraced speaks to the universality of its themes. “We all want to be loved; we all want to be accepted. We all want to feel like we’re being who we are to the fullest possible degree,” he says, “and that’s not an easy thing to do for anyone, let alone someone who’s queer in a small town.”