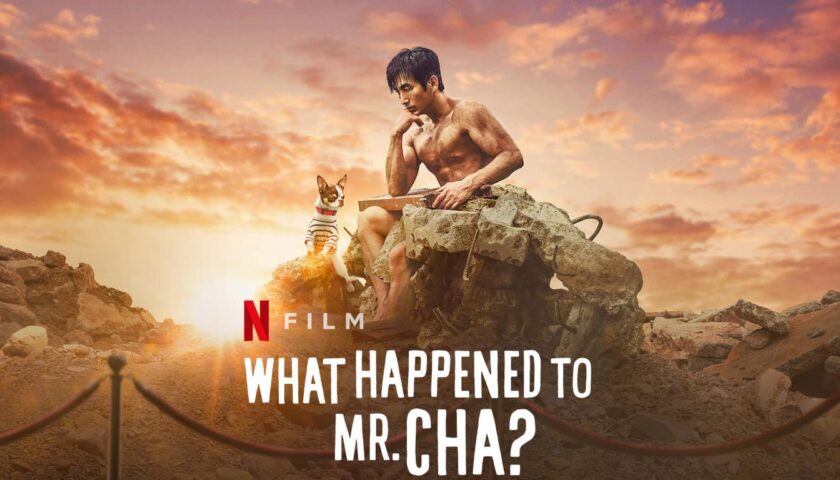 Veteran South Korean actor Cha In-Pyo plays a fictionally-skewed version of himself in What Happened to Mr. Cha?, a cheeky, absurdist riff on the consuming nature of celebrity, personal identity, and the terrors of aging in the public eye.

Cha is still suave. He’s still handsome. And he’s still getting booked for photo shoots. But instead of a magazine cover to promote a new TV show or film, it’s to schill for a line of casual sportswear that he wouldn’t be caught dead in. Adding insult to injury, the shoot’s millennial creative director is trashing all of his signature leading man looks, and the chatty makeup artist is fielding offers for higher profile work than he is. After 25 years in show business, Cha is struggling upstream against a new reality: his career is scraping bottom.

A-ram (Cho Dal-hwan), Cha’s hapless, do-nothing young manager, drives his star home. It’s a home he doesn’t share with his wife, because they recently separated, but he still calls to check on her. (In a further frothing of reality, Cha’s real-life wife, fellow Korean actor Shin Ae-Ra, plays this movie Cha’s wife.) Cha also goes for a hike to clear his head, accompanied by his adorable teacup pup, Twinkle. A couple of power walking seniors stop him on the trail — “So, did you quit acting?” — and Twinkle gets free, only to be returned to Cha by a creepy stranger. But not before the supposed leading man pratfalls straight into a mud puddle. He can’t be seen like this! He’s a big celebrity, right? No problem, says the stranger. Just get cleaned up at the high school down the hill. It’s Summer, he says; there’s no one there…

If Mr. Cha? was a horror movie, this is where our protagonist would be assailed by a machete-wielding maniac or child ghost with scary teeth. Instead, the building’s bumbling support staff touches off an explosion, and untold tons of masonry, rebar, and bathroom fixtures collapse around a showering Cha. Talk about a metaphor for your crumbling career. He comes to, spits out some silica, and does what any actor would do in this predicament. Cha calls his manager.

In the comedy of errors that ensues, a naked Cha, covered in debris, cycles through various means of extricating himself from both the rubble and this most unlikely of situations. He wants out, but not if rescue means losing face. And as Cha muses over his career, his image, and the relative value of each, his manager tries to placate his client while fending off the building’s doofus manager and the gaping maw of the excavator’s hydraulic arm.

What Movies Will It Remind You Of? The most significant touchpoint here is JCVD, the equally self-referential 2008 crime drama that found Jean-Claude van Damme, as himself, stuck in a similarly sticky situation. JCVD took the actor-as-cinematic-Russian-nesting-doll trick even further, with van Damme breaking the fourth wall to essay his own life and career.

Performance Worth Watching: Don’t ever let it be said that Cha In-Pyo can’t act his way out of a pile of rocks. Confronted with conveying hubris, desperation, arrogance, and, ultimately, humility, all while mostly ensconced in masonry, Cha comes through with flying colors.

Memorable Dialogue: A-ram, Cha’s manager, isn’t exactly awesome at securing gigs for his client. But he’s also wary of breaking the news to Cha that the phone is no longer ringing off the hook. Once he ends up in the rockpile, there’s a reckoning to be had. “How I’m rescued is the issue here!” Cha tells him over his battered but functioning phone, arrogance raging despite his precarious status. “Just cover your damn face,” A-ram says. “People won’t recognize your dick.” Cha quakes in the rubble. “Am I a criminal? Why would I cover my face? I’d destroy my image in a flash! Decades of hard work.” And A-ram sighs ruefully. “Do you even know what image you have? What your image is now?”

It takes courage, even perhaps a streak of masochism, to take on a role in something as meta as What Happened to Mr. Cha? becomes, but Cha In-Pyo is up to it. He seizes on playing this perhaps a bit more haughty onscreen version of himself, but still utilizes his natural, very real charisma to convey a sense of warmhearted nostalgia for what came before, both for this movie version and his own damn self. To that end, Mr. Cha? has a lot of fun shuttling through Cha’s past triumphs — old footage of him as heartthrob, as gallant TV doctor, as the macho embodiment of Brando in The Wild One, laconically draped across the handlebars of his motorcycle. The film grows a little sluggish in its midsection, as the star plots his exit from the rubble and his manager casts about desperately for a solution, impeded by broad caricatures of local flunkies. But the longer Cha lies in the debris, and the more he approaches delirium, his reality becomes metaphysical. Cha is seen floating against a field of stars, still encased in cement. He confronts his manager, who floats by on a boulder, and also different manifestations of his own self. It’s like something out of the Marvel Cinematic Universe, events occurring in the great black of the galaxy like Loki doing his dirty business with the Chitauri, only it’s played for comedy. Once Cha truly confronts his new reality — that showbiz has maybe sidelined him, but one must die first in order to be resurrected — What Happened to Mr. Cha? finds a means of wrapping it all up that satisfies the both versions of Cha, in fiction and in reality.