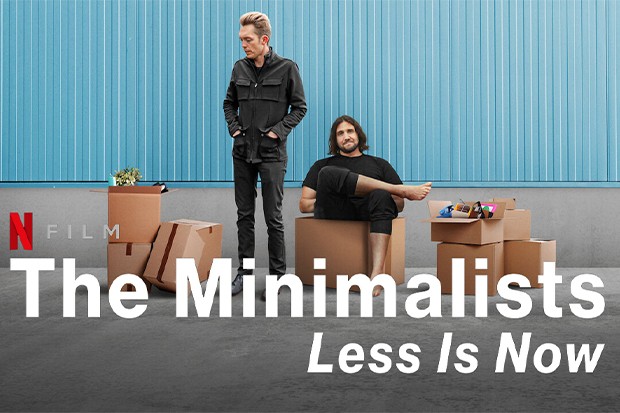 While I admittedly rolled my eyes at the inclusion of Dave Ramsey as an interview subject, I found myself pretty mesmerized by The Minimalists: Less is Now. The notion that we’re slaves to capitalism is not necessarily a new one, but the way The Minimalists addresses our addiction to consuming is both informative and emotionally resonant. It seems like we’re existing in a world where we have more choice than ever, but in fact, we have very few choices. Every move we make is monitored, and every relentless ad we see has been perfectly catered to our likes and wants and needs. It’s no wonder we can’t stop our Prime deliveries and online shopping binges, even in the middle of a pandemic. What this documentary suggests, however, is that all this stuff isn’t necessarily leading to a more fulfilling or better life. In fact, it may be keeping us from achieving just that.

How might our lives be better with less? Based on all of the people interviewed in The Minimalists: Less is Now, there are many ways. Less clutter and more space – both literally and figuratively – lead to more full lives. Ryan and Joshua describe at length how they finally achieved their dreams of steady income and luxurious lifestyles and found themselves feeling emptier than ever, and most of the people in this film seem to be the same. It’s inspiring enough to want to toss one thing out a day for a month yourself and see what happens.

While I did find the film incredibly compelling, some of the choices felt odd – like having Ryan and Joshua stand in jarring sets to describe their personal struggles – and I couldn’t help but wonder why The Minimalists isn’t a series, like The Home Edit or Tidying Up with Marie Kondo. There’s something so inherently cathartic and soothing about truly cleansing a space in the way this duo and other minimalists do, and I’d love to see it serialized. I’m sure I won’t be alone in this. Despite this small issues, however, The Minimalists: Less is Now is a worthy addition to the plethora of life and home improvement titles on Netflix, and I can’t wait to see what the future holds for this duo and the movement that they’re helping spread around the world.