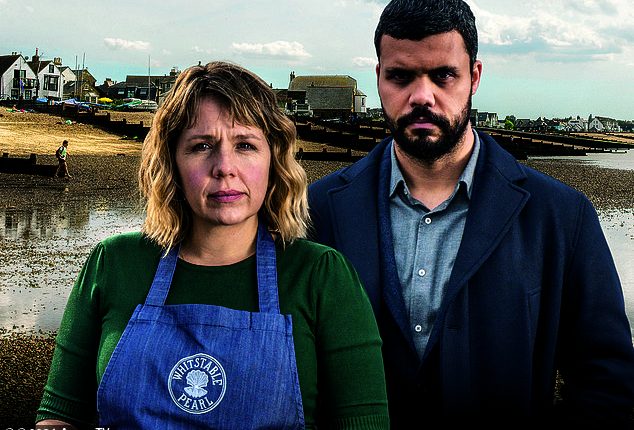 Pearl Nolan (Kerry Godliman), who co-owns the restaurant Whitstable Pearl with her mother Dolly (Frances Barber), became concerned when her oyster supplier and good friend Vinnie didn’t make his delivery that morning, so she goes out to his boat. She tries to pull up the anchor and there he sees Vinnie’s body, entangled with the anchor and completely grey, as if he’s been down there for hours. She transports his boat and his body back to town.

A cop from London, DCI Mike McGuire (Howard Charles) is called in to help the local police investigate. He’s a gruff sort; he berates a guy who won’t back up to let him pass on the rural road into town, then grumbles to Pearl that he hates small towns when he interrogates her. Her answers about why she didn’t leave the body where she found it seemed to satisfy the detective, but Pearl left out a tiny detail: A man who had loaned Vinnie money came to her the day before to track him down.

Pearl has a side business as a private investigator; once she reveals this info to McGuire, he finds out that she was a cop before she had her now college-bound son Charlie (Rohan Nedd). The police think Vinnie’s death was an accident, but Pearl is sure it wasn’t, and when she talks to his partner, she finds out why that guy was so eager to find Vinnie. She seeks the man out, but he ends up dead, too. As Pearl looks into things, she gets a little suspicious of Max (Oliver Dench), the son of a developer (Georg Nikoloff) who is planning on building off the town’s shoreline. Max is also involved with Pearl’s employee Ruby (Isobelle Molloy), and Ruby ends up in the hospital after an overdose.

Based on a series of mysteries by Julie Wassmer, who also adapted her books for this TV series, Whitstable Pearl is most certainly a throwback to the days of amateur sleuths finding themselves investigating an inordinate number of murders and other violent crimes in their supposedly bucolic small towns. British TV is still a place where shows like these thrive, and they tend to depend on the chemistry of the show’s regulars and how their characters develop, because the mysteries they investigate aren’t always all that great.

That’s the case in the first episode of Whitstable Pearl. The mystery at the heart of this premiere feels abbreviated. There aren’t any clues dropped along the way that would help the viewer try to solve the mystery along with Pearl. In fact, the clue that gives Pearl the suspicion she has feels like it’s dropped out of nowhere. Additional pieces that might make the mystery seem like it’ll last longer than an episode, like the appearance then disappearance of Vinnie’s ex-wife Tina (Cathy Tyson), seem to be dropped when they no longer serve the plot.

But first episodes of shows like these often sacrifice decent mystery elements in order to take more time to introduce us to the regular characters. And we learn quite a bit about Pearl and her mother just by the fact that they own this popular eatery in town, and work and live together.

DCI McGuire, on the other hand, is still a bit of a mystery. He doesn’t seem to be a very effective cop, given that he threatened to arrest Pearl more often than he actually spent looking into these murders. We know he’s grumpy, doesn’t like small talk or people being friendly to him, and he whitens his teeth. While lying down in the room where he’s staying, he thinks about a woman that apparently is no longer around. So there seems to be no reason for him to stay in Whitstable when this case is solved. Yet he does, setting up a push-pull professional relationship between him and Pearl.

There’s lots to like about Kerry Godliman as Pearl, and it does seem like the chemistry between Godliman and Howard Charles is good enough to sustain Whitstable Pearl, but the mysteries need to get a lot stronger before this show can compete with other hit British mystery series.