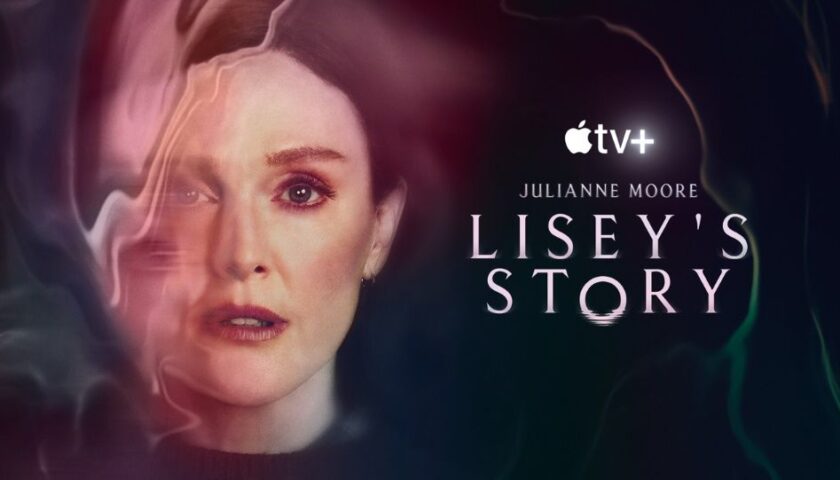 Apple TV+ is enthusiastically touting its version of Stephen King’s 2006 book Lisey’s Story as having been written in its eight-episode entirety by the Master of Horror himself. That’s both a rarity and a mixed blessing.

The limited series is surely one of the most novelistic and literary-feeling of King adaptations, capturing the mix of languor and propulsiveness that marks the author’s novels of that period, reveling in his myriad extended metaphors and featuring characters who speak in rhythms that could only have sprung from King’s brain. It feels like Stephen King.

But as I choose to interpret the theme of The Dark Half, sometimes Stephen King has to be protected from Stephen King.  Lisey’s Story is indeed overflowing with ideas — sometimes grandiose, sometimes goofy — that play better on the page than the screen. Director Pablo Larraín and a splendid cast led by Julianne Moore and Clive Owen are left with the task of making Lisey’s Story cinematic, resulting in a push-and-pull that’s all-too-visible, especially in the series’ clumsy back-half.

The series, like the book, blends two familiar King subgenera: It’s part exploration of the ephemeral and mystical nature of creativity via a writer character who closely resembles King, and part portrait of an overlooked woman finding agency after weathering abuse, through circumstances that border on supernatural.

Lisey (Moore) is two years into grieving for late husband Scott (Owen), whose bestselling tomes are so beloved they inspire academics and vulnerable fans alike. Lisey and Scott had a passionate and symbiotic relationship, bound by shared secrets relating to Scott’s traumatic childhood. Scott’s absence leaves Lisey struggling to find her own identity. It isn’t helping matters that a college professor (Ron Cephas Jones) has enlisted unstable superfan Jim (Dane DeHaan) to “convince” Lisey to give up Scott’s personal papers and unpublished manuscripts.

In Scott’s past — marked by a strung-out dad (Michael Pitt) and a brother who had to periodically have the “bad” drained out of him — he possessed the ability to journey into a magical realm known as Boo’ya Moon, where Lisey’s catatonic sister Amanda (Joan Allen) has also retreated. This leaves Lisey’s other sister Darla (Jennifer Jason Leigh, co-star of top-notch King adaptation Dolores Claiborne) as the only one confused by the whole thing (a reaction audience members will appreciate).

For at least the first four hours, Larrain steers into the confusion. Lisey’s uncomfortable transition into widowhood, like that of the protagonist in Larrain’s Jackie, is evoked in sequences that slip between past and present, fantasy and reality. Viewers aren’t always supposed to know how to make sense of Lisey’s memories, which flit between her marriage and honeymoon, a shocking assassination attempt on Scott, Scott’s own recollections and the netherworld where lost souls sit and stare off into something called The Pool. It’s a dream. It’s a nightmare. And with Larrain and master cinematographer Darius Khondji in control, it’s like slipping into a warm body of water (just one of several symbols repeated on a loop here).

Lisey’s Story grows more conventional as it goes along — even the score by the mononymous Clark is reduced from challenging and discordant to merely swelling — and that’s an asset when you get funny scenes featuring Moore, Allen and Leigh together, but a liability when King loses track of how often characters can say “Boo’ya Moon” before it becomes silly.

The answer? Fewer times in a series than in a book. Other things that might have been better left on the page include King-y conceits like the treasure hunts called “bools” and wicked characters who speak in incantations — “Secret secrets are no fun. Secret secrets hurt someone.” — and boast eccentricities like loving retro music and yo-yos. The advantage of bringing in other voices on an adaptation is getting a clearer-eyed perspective on which aspects from the source material should be excluded. There’s an expositional dump toward the end of the fourth episode that knocked me out of the show’s spell; I only sporadically returned.

So much of what holds Lisey’s Story together as a series, even as its narrative is unraveling, is its cast. Moore is one of our all-time great screen sobbers and Lisey’s misery gives her ample room for that. But I especially enjoyed how the character plays into Moore’s wildly underutilized gift for tough-talking humor. When the scripts let Lisey and Scott show affection, Owen is very good, but man does he mumble his way through some blather-filled monologues. Somehow, despite taking eight hours to tell a story that could easily have been fit into a feature, the series fails to add meaningful nuance to the Lisey-Scott marriage. The strength of Lisey’s Story is in its portrait of a committed-if-codependent marriage, and that gets frequently lost as people ramble through a Where the Wild Things Are-style fantasy realm that yields diminishing returns no matter how lovingly Khondji shoots it.

Among supporting players, Leigh shines as the eyes of the audience and Allen is committed, sometimes verging on excessively so, to Amanda’s shades of catatonia. DeHaan and Pitt are effectively, if redundantly, twitchy and unnerving, while the underused Jones offers a more erudite presence. Beware, Fast & Furious fans, of how thoroughly wasted Sung Kang is here as a local cop who protects Lisey very poorly. He’s listed among the cast regulars, but that’s really not fair to him or his fans.

The overall problem in Lisey’s Story generally doesn’t concern the actors — or the director, since Larrain gives every frame intimacy, however much you sense his desire to buck the increased linearity of the story. No, the problem is the all-too-palpable battle between fidelity to a text and compatibility to a medium. You can tell King preferred the former, even if the series would have benefitted from the latter.