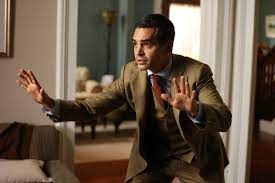 The woman, Abigail Bentley (guest star Jennifer Morrison) finds what the thinks is her daughter’s body, then wrestles whom she thinks stabbed her to death down the stairs, eventually strangling him with a tennis racquet.

We then cut to Will Trent (Ramón Rodríguez), special agent for the Georgia Bureau of Investigation, trying to bring Betty, the tiny chihuahua his neighbor left behind when he moved, to the local shelter. But when they can’t confirm that they’re a no-kill shelter, he brings the little doggie back home. His boss at the GBI, Amanda Wagner (Sonja Sohn), brings him to the house to read the crime scene, a favor to the governor. The Atlanta PD is completely hostile to Trent, given that his last big case was about corruption in the APD, resulting in the arrests and resignations of many of their colleagues.

When he looks at the scene he realizes some things are off. But when the girl’s father, auto dealership owner Paul Campano (guest Mark-Paul Gosselaar) shows up and tells Will that’s not his daughter, Will realizes that Campano’s and Bentley’s daughter was kidnapped. So, even though GBI doesn’t investigates homicides and Trent’s never done an abduction case, Amanda lets her best detective run with it. She also elevates APD detective Faith Mitchell (Iantha Richardson) to temporary agent status to partner up with him; she’s a family friend and knows Faith will be a good complement to Trent’s unique skills.

When Campano calls Trent “Trash”, alluding to the fact that Trent was found in a Dumpster as a baby, we start to get filled in on the rough upbringing Trent had in Atlanta’s foster system. It also alludes to the fact that the two of them knew each other; they both lived in the same group home when they were kids, and Campano was a massive bully.

There is also someone else who shares Trent’s group home experience: APD detective Angie Polaski (Erika Christensen). They’ve also been on-again, off-again since their days in the group home, but she’s also been his biggest supporter. She knows he struggles to read due to his dyslexia, and he’s devised some ingenious ways to get around it, like speaking his notes into a tape recorder. She has issues of her own; she’s in recovery while she happens to be undercover on a drug sting.

Let’s get this out of the way immediately: The mysteries in the first two episodes of Will Trent don’t really hang together well. There’s the overarching mystery of the kidnapped teenager, which most definitely wastes the talent of Morrison in her guest role. But in each episode, there’s also a case involving Polaski, first in her undercover capacity then in the second episode in her new position as a homicide detective, paired with Det. Michael Ormewood (Jake McLaughlin), with whom she also seems to have a history.

The mysteries in each case are relatively straightforward, more designed to introduce us to the characters and their histories than to be truly intriguing on their own. If that’s the intention of Liz Heldens and Daniel T. Thomsen, who developed the show from the novel series (Slaughter is also an EP), that’s just fine with us. The character of Trent is pretty well established in the first two episodes, including his reading disability and rough upbringing; it makes him a whole lot deeper than the quirks he displays in the show’s first moments.

His natty mode of dress, the handkerchief that he carries, the fact that he doesn’t write any notes, are all adeptly explained in the first two episodes, and Rodroguez’s portrayal of him should get more layered as the series continues. The only thing we would like to see from Rodríguez is that he gets a handle of Trent’s voice, literally: There were times in the first two episodes where he lays on the “Southern Gentleman” accent pretty thick and there are others where the accent isn’t there and he just sounds like himself. He needs to pick a lane there and be consistent.

We also get enough backstories of the thankfully small ensemble to be intrigued by where their characters are supposed to go. Christensen is especially good as Polaski, who sees her relationship with Will as something detrimental to her moving on with her life, but they also have a bond that not many people can share. But we also just enjoyed her nuanced performance, something that’s often in short supply on network procedurals like this.

Because of the surprisingly deep character development in the first two episodes, we’ll be happy to follow Trent, Polaski and company through various mediocre mysteries, just like we did when we watched Monk or Elementary.