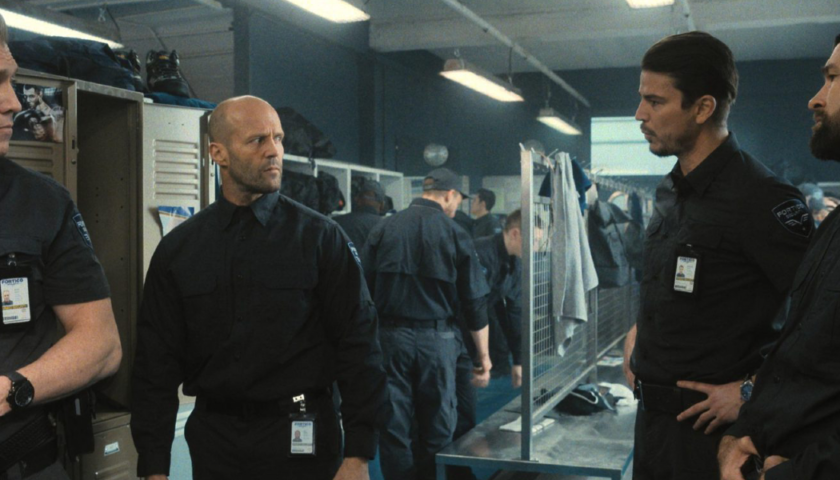 When H shows up for work in Guy Ritchie’s “Wrath of Man,” no one at Fortico Security has much reason to suspect he might have any motive other than protecting the cash for the armored-truck outfit. The new guy — who looks an awful lot like the bald bloke from the “Crank” and “Transporter” movies — doesn’t waste words. His backstory checks out, as do his references. He’s a decent shot, but not so good that it would attract attention. Just another guard on an experienced team that recently lost two of its own in a bloody heist.

His first day on the job, however, some jokers try to rob H’s truck, and he can’t help showing them he means business. What could have been a $2.5 million robbery winds up with his co-workers safe, the money secure and half a dozen would-be crooks dead. Not just dead, but plugged so precisely, it’s hard to ignore that H must be some kind of professional — and a hell of a better marksman than his employers took him for.

Ticket buyers will be considerably less surprised than the instant hero’s Fortico colleagues to learn that H has an agenda. That’s because H is played by Jason Statham, reuniting with Ritchie more than two decades after “Lock, Stock and Two Smoking Barrels” launched both of their blockbuster movie careers, and it’s not for nothing that these two decided to team up again.

As the pair’s crime-movie collaborations go, this latest project isn’t nearly so flashy as career-high “Snatch” or the whirling, rococo mess that was “Revolver.” While Statham plays off the stoical tough-guy persona he’s developed in the interim, Ritchie settles into the tense but relatively restrained mode of Christopher Nolan — specifically, “The Dark Knight,” easily the most influential action movie since “The Matrix.”

Ritchie’s own RocknRolla-coaster style has plenty of imitators, but here, it’s refreshing to see him calm down and deliver something that’s intricate without being addled. The production adopts an elegant, almost monochromatic color palette, while composer Christopher Benstead’s undeniably Zimmer-esque double-bassy score steadily saws away at our nerves, keeping audiences just this side of a heart attack for the better part of two hours. Like the H character, “Wrath of Man” walks into the room confident and secure in its abilities, professional, efficient and potentially lethal.

Though Ritchie and “The Gentlemen” co-writers Marn Davies and Ivan Atkinson have taken considerable liberties along the way, “Wrath of Man” serves as a remake of/improvement upon Nicolas Boukhrief’s 2008 “Cash Truck” (Le Convoyeur), a tight 95-minute thriller little seen outside its native France. The setup is the same, though best left vague, considering the fun that comes in speculating as to H’s motives during the new film’s mysterious first hour: Is he a government agent? A criminal mastermind? Is he planning a heist of his own? Or did he join Fortico to thwart the next one?

The title is a clue, obviously, and in time, Ritchie reveals the reverse angles on that opening strike — a strategic coup, executed with almost military precision, in which a team disguised as construction workers stall the Fortico truck and steal its contents, killing both guards and a couple of civilians in the process. The first time we see the scene, the camera is locked down among the cash bags in the back of the vehicle, and it’s hard to make out what is going on exactly. The robbery might as well be happening to us, the viewers, so terrifying and immediate does it all unfold.

Ritchie will show the heist two more times: first from H’s perspective (as it happens, he’s casing the Fortico headquarters when it occurs), then again from that of the squad that planned it — or more specifically, through the one good eye of the face-scarred renegade member (Scott Eastwood) who did all of the shooting. By this time, it’s more than clear how H relates to everything, as well as what his end goal is, which is more than can be said for the French film that opted for a more elliptical version of the same crime.

H wants revenge. And from the looks of it, he has nothing to lose, which makes him even more dangerous than what the character’s backstory would suggest.

Without divulging his true identity, allow me to tease one detail I don’t think I’ve ever seen in another movie — this one involving yet another cash truck robbery in which H is along for the ride: The van is on a routine call when thieves surround it, forcing the driver (an affable meathead who calls himself “Bullet,” played by Holt McCallany) and H to exit the vehicle. H steps out and … Ritchie cuts to the debriefing scene back at the Fortico depot.

Already the director has established a punchy yet anti-gratuitous style that turns away from (or otherwise minimizes) the moments that might have been most upsetting to witness, leaving much of the violence off-screen. But to omit this particular showdown entirely? Turns out, not a shot was fired. The gang took one look at H’s face and hastily turned around, abandoning the scene of the crime. Not even John Wick has that effect on people. And this comes after the authorities have given him carte blanche. As a high-ranking FBI agent (played by Andy Garcia) puts it, “Let the painter paint.”

Enigmas abound in the clockwork-precise suspense puzzle. While not without plot holes, the mechanism grips as it gradually builds toward a climactic scheme to hit the depot on Black Friday, the biggest cash day of the year — a plan that hinges on an inside man. Or woman. Fortico manager Terry (Eddie Marsan) is suspicious of H, but also raises suspicions of his own. Grudge-minded John (Alex Ferns) controls access to the facility, always nervous Boy Sweat Dave (Josh Hartnett) has an itchy trigger finger, and lone female guard Dana (Niamh Algar) is revealed to have stolen from the company before. Any of them could be in on it.

Rather than merely rehashing Boukhrief’s ideas, Ritchie comes up with striking, original set-pieces, favoring the aforementioned discipline of Nolan’s “The Dark Knight” (and before that, Michael Mann’s “Heat,” which shares this film’s industrial-looking Los Angeles backdrop) over his own more flamboyant M.O. of swooping camera moves and variable film speeds. A few years ago, when Sam Mendes left the Bond franchise, Ritchie’s name was floated as a possible replacement. He didn’t take the gig, but “Wrath of Man” shows that he certainly could have, classing up his signature technique while never quite abandoning the cockney swagger. The approach would have suited the 007 franchise just fine. But who knows — he may have just minted his own instead.