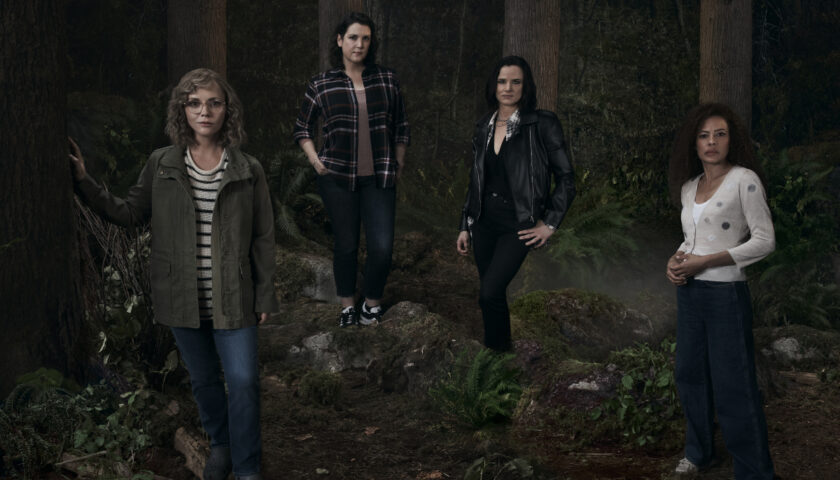 There are so many unanswered questions in Showtime’s Yellowjackets it’s tough to imagine that the creators will get around to answering even half of them in its 10-episode first season. The six episodes available for review raise nearly as many questions as they answer, but the story remains captivating. Yellowjackets is a genre-bending thriller with compelling characters and multiple enticing mysteries. There may be some disappointment on the horizon, but for now, Yellowjackets is about as addictive as television thrillers get.

Creators Ashley Lyle and Bart Nickerson (Netflix’s Narcos) come up with an enticing premise that immediately draws the audience in with a horrifying, graphic opening. That specific moment hangs over everything that follows in the series while the show’s main story unfolds primarily in two different timelines. In 1996, a girls’ high school soccer team wins the New Jersey state championship. The team heads to Seattle for nationals; however, they never arrive. Their plane crashes somewhere in the Canadian wilderness, leaving them stranded.

In 2021, the now-adult survivors feel haunted by their plane crash — not just from the trauma of scrounging in the woods for nearly two years, but also some unspecified terrible acts they committed against each other. Although most team members survived the initial crash, only a handful of the women show up in the present day. The question of what happened to those other survivors is one of Yellowjackets’ primary mysteries.

The present-day storyline focuses on four survivors, drawn together by an unknown tormentor, demanding blackmail money to keep quiet about whatever happened in the woods. Shauna (Melanie Lynskey) is a frustrated housewife married to her high school boyfriend Jeff (Warren Kole) and raising a rebellious teenage daughter. Taissa (Tawny Cypress) is a high-strung politician running for the New Jersey state senate and concerned about her young son’s psychological problems. Natalie (Juliette Lewis) is an alcoholic just out of her latest stint in rehab. And Misty (Christina Ricci), the team’s equipment manager, is a disturbingly chipper nurse who’s hiding some dark impulses — and not hiding them very well.

In 1996, Shauna (Sophie Nélisse) and captain Jackie (Ella Purnell) are best friends — even though Shauna has been hiding a big betrayal from her. Taissa (Jasmin Savoy Brown) is a natural leader who takes command when the team is left to fend for themselves, but she’s also hiding her sexuality. Natalie (Sophie Thatcher) is already on her way to becoming an alcoholic, but she’s the group’s best hunter, literally keeping them from starving. And Misty (Sammi Hanratty) is a little too into becoming a survivalist, suddenly finding herself appreciated by the team for the first time, thanks to her first aid training.

That’s a lot to keep track of, especially as each episode of Yellowjackets jumps back and forth between time periods. But the creators keep things running remarkably smoothly — even with the widening supporting cast — and the storytelling is almost never confusing or obtuse. There’s obvious urgency to the team’s efforts to survive in the wilderness. Even though the audience knows that they’ll eventually be rescued, there’s enough uncertainty about what will happen in the meantime to generate genuine suspense.

The stakes aren’t quite as high in the present-day scenes, but the fantastic lead performances lend gravity to the characters’ journies. As their unseen enemy escalates their demands, it’s clear that they could be in real danger. Each character has secrets and ulterior motives. They reunite reluctantly, not trusting each other any more than they trust the shady reporter who’s snooping around for a scoop on their time in the woods.

Yellowjackets recalls mystery-box shows like Lost, and the segments with the teenage characters have a familiar YA feel — resembling recent teen thrillers like Amazon’s The Wilds, which is also about teenage girls stranded in a harsh environment, or Freeform’s Cruel Summer, which employs a similar time-shifting format and shares an affinity for ’90s music. As the series goes on, there are hints of something supernatural in the woods, but the horrors of human behavior are scary enough that there’s no need for any otherworldly menace. The girls seem poised to go full Lord of the Flies, and that’s scarier than any ghost or demon.

Yellowjackets forges its own unique path, not merely copying any of its forerunners. Along with the top-notch acting — especially from Ricci as sunny sociopath Misty — Yellowjackets finds the perfect balance of pulp and prestige. It’s a binge-worthy thriller that offers a meditation on aging and regret along with twists and terrors.