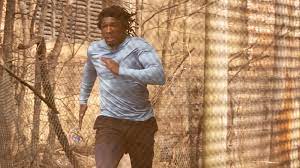 The first episode of “61st Street” lays the foundation for a story that’s become all too familiar on television and in reality alike. Over eight episodes, AMC’s new drama (executive produced by Michael B. Jordan) depicts the before, during, and frantic after of a Chicago drug bust that ends in two deaths: Rufus (Kevin Tre’von Patterson), a Black teen with deep roots in the community, and Offer Mike Rossi (Patrick Mulvey), who had been quietly investigating his precinct for corruption before this fateful day. While the cops call Rufus’ death an open and shut case of an officer defending himself, they pin Rossi’s on Moses Johnson (Tosin Cole), a promising track star caught in the wrong place at the wrong time while trying to get his brother Joshua (Bentley Green) home, before an accidental brush with Rossi sent the cop’s head into a protruding pipe, killing him almost instantly.

With limited time to lay groundwork for the intersecting stories to come, Peter Moffat’s pilot can be just as blunt as Rossi’s death. Few characters beyond Courtney B. Vance’s frustrated public defender stretch beyond their basic descriptors; every dramatic moment gets an equally dramatic music sting; the entire episode appears to have been shot through a hazy, amber Instagram filter. When the dead police offer’s partner Johnny (Mark O’Brien) loses his temper, he grabs Joshua by the shirt and yells, “Look at me! You see a blue life that doesn’t matter, right?” Moffat’s resumé (including “The Night Of” and “Your Honor”) speaks to his long held interest in complex crime stories and the role systemic prejudice plays in keeping true justice at bay. And yet his attempt to tell the story of “61st Street” — so named for the avenue in which Rossi dies and Moses’ life changes forever — initially feels like a morality play with everyone playing the most obvious version of their part.

That’s the bad news. The good news is that once the show moves beyond its basic setup, and writers like Allison Davis (“David Makes Man,” “The Underground Railroad”), Tolu Awosika and Olumide Odebunmi get a chance to dig deeper, “61st Street” is on much firmer and more fertile ground. It also takes advantage of the fact that AMC ordered two seasons at once, meaning that the series will be able to take real time to tell this story, in all its terrible intricacies.

In fact, the first few episodes unfold over just a couple days, following not just Moses and Franklin (Vance) trying to figure out their next steps, but also Joshua and Johnny grappling with their losses. When Moses gets caught, the show demonstrates just how corrupt police chief Brannigan (Holt McCallany) manipulates every situation to benefit himself and his cops. Most notably, and refreshingly, the show affords Moses’ mother Norma ample time to do more than just grieve in the background, therefore allowing actor Andrene Ward-Hammond to rise to the occasion and deliver a standout performance. While at first it seems like Oscar nominee Aunjanue Ellis (“King Richard”) might just be playing the role of “Franklin’s wife,” her character quickly expands to drive an arc all her own.

Once the initial rush of those first few days is through, it’s to the show’s credit that its sense of urgency doesn’t wane. The ticking clocks of Moses’ eroding confidence, the case evolving in more urgently dangerous ways, and Franklin’s dismal cancer diagnosis combine to keep “61st Street” moving, propulsive and palpably stressful. Vance might not have as many explosive moments in this series’ first several episodes as he has in other productions; he doesn’t even get a real courtroom scene until the season’s almost through. But he nevertheless imbues his performance with a singular gravity that makes clear Franklin’s resolve to make things right, no matter how steep the hill to get there.

In its least convincing moments, “61st Street” feels derivative of other works that have tackled similar subject matter. In its best ones, it paces itself, pushes beyond the basics, and trusts its actors find more nuance beyond the tropes that could have swallowed their characters whole.