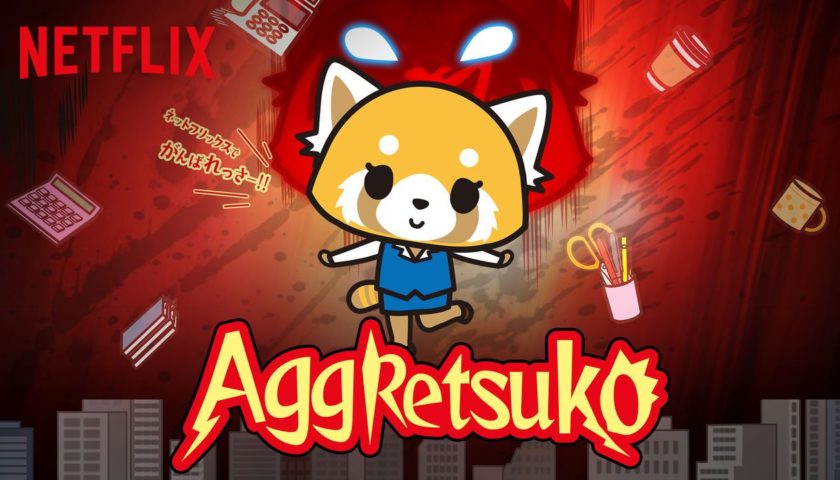 Review: There’s a reason why corporate jobs are commonly described as “soul-sucking.” They suck. Aggretsuko knows the pain of corporate frustration well, but instead of just standing as an animated Office Space rip-off, it smartly channels the specific ways the office is hell for women. If you weren’t frustrated with your day job before, you will be after watching one 15-minute episode of this Netflix original.

Also known as Aggressive Retsuko, Aggretsuko was created by Rarecho, an animator known for his cutesy anthropomorphic animal characters. Most of the characters in Aggretsuko come from Sanrio, the company behind Hello Kitty and other beloved, adorable characters. But don’t let the show’s harmless origins fool you. Aggretsuko with its love of surprisingly catchy death metal and curse-filled rants about terrible bosses has no patience for pretending to be cute when there’s office imbalances to mock.

The series follows 25-year-old red panda Retsuko (Japanese: Kaolip / English: Erica Mendez). To her friends and co-workers, Retsuko is an overly responsible hard worker, someone who’s more likely to sacrifice her weekends to finish a project or help a friend than realize that she’s on the cusp of a breakdown. However, Retsuko’s sweet smile is a lie. Through the help of her favorite karaoke bar and death metal, the young woman routinely screams out her frustrations with her bosses, her workload, her friends, and herself.

Aggretsuko is funny from the base concept up. The animation is too cute and death metal is too aggressive for the combination of the two to be anything but silly. But what really sets Aggretsuko apart is its focus on the unspoken sexism of the average office. Both of Retsuko’s bosses routinely take advantage of her, giving her extra work, criticizing her when she smiles too much, and yelling at her when she doesn’t smile enough. She regularly calls her male boss — an actual pig — a chauvinistic pig, and she’s not wrong.

While she’s juggling the lose-lose situation of trying to figure out how she can be agreeable without becoming a doormat, Retsuko also has pesky co-workers to worry about. She has a hippopotamus acquaintance who seems to live for scathing rumors about her, and a frenemy whose intentions are unclear but definitely not good. Thankfully she also has Fenneko (Rina Inoue / Katelyn Gault), her cynical fox best friend, and Haida (Shingo Kato / Ben Diskin), her hyena friend and mild love interest, to help her through the day. Retsuko’s work life is hard, but there are silver linings.

It’s the little things that Aggretsuko gets so right in its deceptively cute, ever-barbed way. This feels especially true as I write this review in a corporate office dominated by bright white lights and the ringing phones of my co-workers. After facing a major disappointment, Retsuko completely shuts down for half an episode, literally turning into a robot. It’s a moment that wonderfully mirrors the exhausting amount of emotional labor that comes with conforming to stereotypically female gender roles in today’s society. And it’s not just a burnt-out Retsuko or a snarky Fenneko that carries this weight. At one point our three main characters marvel at two female executives who walk around the building like they own the place. The second these powerful women turn the corner, they collapse. Power-walking is hard.

Aggretsuko gets that corporate life can be miserable, but there’s something oddly comforting to that bleak observation. You may hate your day job, but Retsuko hates her’s more. At least we all have karaoke to help us scream out our anger, one song at a time.