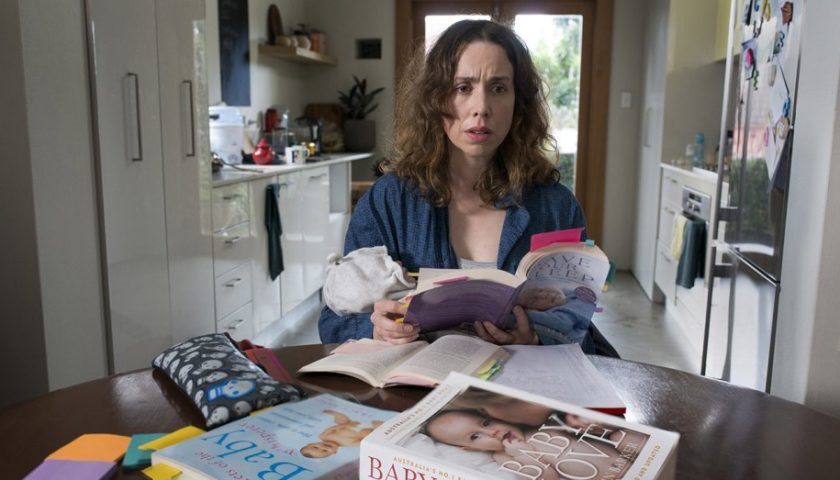 Review: After two episodes, I have warmed to the premise of this show. It offers an amusing and fairly convincing glimpse into the experiences of childbirth and early-parenting, and it seems to hit its targets more often than it misses.

Audrey is the new mother at the center of the story. Much is made of her feelings of inadequacy and inferiority, especially when surrounded by mothers for whom it seems to come all too easily. The first episode rolled out an admittedly predictable roster of clichéd mother-types to stand as Audrey’s peers – the ambitious career-mother, the perfect angel-mother, the airhead hippy-mother – but to its credit, the show seems willing to push beyond these thin characterizations, allowing us to see the insecurities that prompt mothers to produce confident and overachieving facades. As Audrey learns this, she herself emerges as more capable and self-assured. It is a positive portrayal of motherhood and parenthood, and I hope that The Letdown continues to pursue this message through its run.

I will also watch in hope that the show does not eventually succumb to lazy stereotypes with some of its characters. So far, only brief glimpses have been offered of a young Asian mother and a non-gender binary parent (who prompts a not-very-tolerant eye-roll from other characters). As the show develops, it may give sharper focus to these characters – it would be a shame if they faded into the background.

Of course, a show like this is compulsory viewing for anyone who is recently a parent, but I think its message remains true for anyone, as it is one of those rare programs that succeeds in making our failings and frailties sharply entertaining. I will be watching with interest to see where it goes from here.