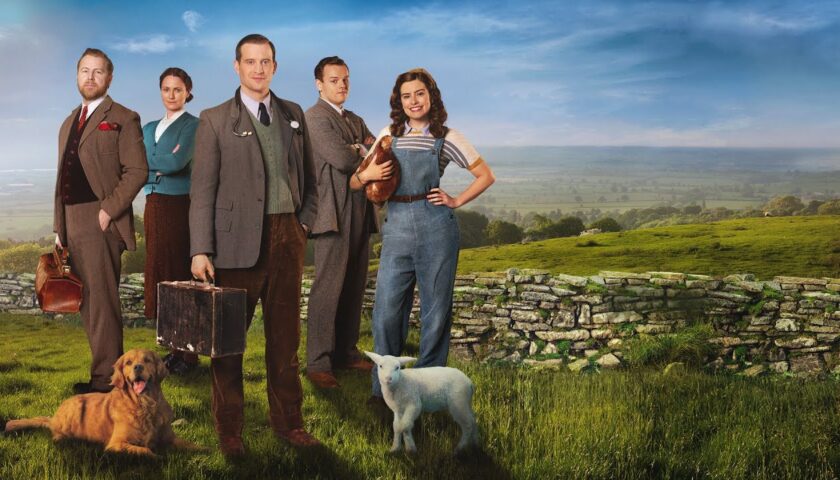 Onscreen, kindness and inevitability go hand in hand. Build a show or a movie around a group of characters driven by goodness or decency and it tends to result in whatever story that validates our brave heroic protagonist and provides comfort to the most amount of viewers. In turn, that clear, expected trajectory usually ends up enervating any narrative drive and gives it the relative heft of a cirrus cloud.

By all indications, the same should be true for “All Creatures Great and Small.” Adapted from the beloved James Herriot memoir that already spawned a beloved TV predecessor a half century ago, this latest version (originally created for Channel 5 and now arriving as part of PBS’ long running “Masterpiece” series) seems destined to fall into the same formula.

What’s remarkable is how much of that bouncy, vibrant spirit this series is able to retain while also bucking some of the expectations shows of its kind are usually saddled with. James (Nicholas Ralph) begins this season as an aspiring veterinarian, wide-eyed and book-smart but green to the practical application of all his school learning. Under the tutelage of a new employer Siegfried Farnon (Samuel West), Herriot looks to hone his skills and gain the trust of his new client base in the process.

All Creatures Great and Small” is a “lighthearted” drama only in the non-pejorative senses of the word. There’s a sense of brimming optimism and faith pouring out from so many of these folks, even when confronted with disgruntled neighbors, personal tragedies, and the unforgiving whims of nature. There’s a sense of renewed spirit with each new episode not because this is a veterinary procedural that always hits the reset button, but because it’s fashioned around people who take pride in the pursuit of improving the lives of those around them. (Nearly three years after the film world had its share, and fresh off a year that brought both “The Babysitters Club” and “Ted Lasso,” maybe it’s time to consider that TV is in its own nicecore wave.)

That buoyancy only strengthens the idea that what James and Siegfried (and in her own way, their housekeeper Mrs. Hall) are doing sometimes revolves around ideas of life and death. Their job is a fundamental part of making sure that the people of Darrowby can retain their livelihood. For every lifesaving effort to help a cow give birth, the show finds just as much delight in the more menial parts of the job: judging a town pet contest, helping to assuage the anxieties of well-to-do clients, and even performing the odd castration or two. Each new task is accompanied by the kind of lived-in diagnostic jargon that respects both the source material and these characters as competent, eager professionals.

Along with embracing emotions as a strength, “All Creatures Great and Small” also luxuriates in the North English countryside. Darrowby doesn’t just exist as a few indoor sets and some storefronts. It’s in the wide areas of a farmland where both farmers and animals make their homes. The sweeping shots of ‘30s-area automobiles heading down one-lane roads, coupled with the sharp costuming detail, give the show a time and place on small and wide scales.

Although the reverse is true, those lush landscapes would be nothing without the people inhabiting them. “All Creatures Great and Small” is fortunate to have performers who know how to immediately take on the character types drawn out for them. Ralph brings a quiet, unassuming bookish charm to James. Anna Madeley is superb at balancing the warmth that Mrs. Hall as both a housekeeper, maternal figure, and knowing friend. The arrival of Siegfried’s younger brother Tristan comes with some standard underachieving playboy signifiers, but Callum Woodhouse tempers that with some genuine goodwill. Capping it all off is the continually impressive West, who gives off all the energy of a hard-nose boss even as Siegfried gradually sheds the tougher parts of that exterior.

What really sets apart this show from its spiritual peers is just how much each of the central quartet are given room to subvert each of those initial characterizations. James’ heartsick pining leaves him conflicted, a slight shading of his straightforward virtuousness elsewhere. Tristan has some romantic vulnerabilities of his own. There’s a life for Mrs. Hall outside the four walls of the home she tends to during the day. And where the sometimes-eccentric, hard-to-crack mentor figure usually has a grandfatherly air, “All Creatures Great and Small” gets so much more out of James’ journey because Siegfried is far closer to a peer than a parent.

It’s a family drama with an unlikely family, consisting of brothers and employers and associates and friendly rivals. It’s hard not to have as much affection for them as they clearly have for each other. There are a handful of scenes that play out like a restrained dance number, with each of the occupants of Skeldale House coming and going from their various rooms (sometimes with unexpected company). It’s only fitting that a show with care for animals at its center should thrive on a kind of energy that feels organic, powered by discovering what’s new around each corner.

A second season of the show has already been announced, which makes complete sense not just because it’s a welcome antidote to our current collective uncertainty. “All Creatures Great and Small” isn’t a show that builds in its challenges until there’s no room left to grow. It’s not as if James begins with examining a ferret and then, by season’s end, finally gets the opportunity to treat the local prized bull. If anything, the show’s growth is in its roots, the idea that with creatures of various sizes come corresponding problems. No matter what the challenge, this is a series that welcomes each new call with an open heart and a wide, knowing smile.