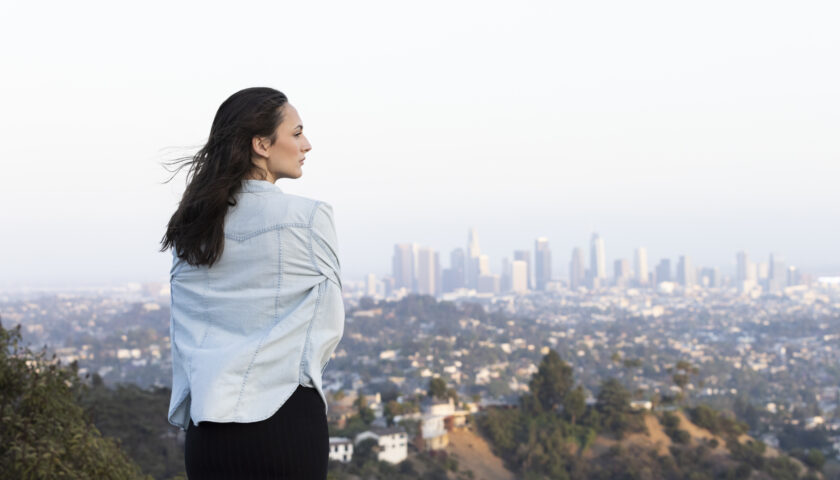 With so much reality TV available it’s hard to find concepts where that reality can compel an audience to stick around. Too much conflict can come off as fake or forced. Or there’s the opportunity to go the other way, and make the reality seem particularly real because of a “day in the life” method — which has always been popular in documentary. There’s nothing good that old-fashioned cinema verite can’t achieve. But often that can cause things to feel just as fake or forced, and such is the issue with Amazon Prime Video’s four-part docuseries “Always Jane.”

“Always Jane” follows high school senior Jane Noury, a transgender teen awaiting her gender affirming surgery, planning for college, and stepping into the world of modeling. By her side are her parents, David and Laura, her two sisters, and her grandfather.

Right away there’s a dissonance in what “Always Jane” actually is — as summed up in the above synopsis — and how it’s being sold. The official synopsis presents far more conflict, citing how “today’s political and social climate may not seem like the easiest time for a transgender teen” and, while true, that doesn’t actually come through in any of the episodes. Let it be said, “Always Jane” doesn’t revel, nor should it, in the trauma that was Jane’s life. She talks frankly about bullying, while her parents and her older sister Emma, who attends the Naval Academy, hint at more political issues like then-President Trump rolling back rights for trans people.

Jane is certainly a vibrant young woman, even if her penchant for throwing duck lips can become cumbersome. She’s a typical teen with dreams and ambitions, one of which is becoming a model. She embarks on an audition for a transgender modeling agency, wherein she and other models talk about the freedom that comes from being surrounded by other trans people. Growing up in Sparta, New Jersey, we see that Jane doesn’t have that same level of freedom. It’s certainly beaten into audiences’ head with a pointed crane shot showing Jane all alone in a school auditorium.

She’s appropriately silly and sweet, all of which we see in moments of her driving with her sisters or during the few scenes of her at school. But maybe because of the timing with COVID, Jane’s life feels far too isolated. Most of her friendships are conducted on Instagram, and that’s before lockdown sends everyone home. There’s a real sense of confinement and selectivity in who tells this story that even how we’re supposed to see Jane feels controlled.

The problem is the entire affair, too often, feels like inspiration porn. Where the joy for the audience is going to be seeing how inspiring Jane is — and little else. Every discussion is presented in the past tense — financial issues, bullying, even Jane’s extended family not accepting her — that it becomes focused on these characters recounting a story, like it’s an audition tape for why Jane should have her own show. Later on, there’s a significant gap in the filming, nearly two months that went unrecorded, and Jane’s mother discusses her daughter’s struggles to decide what she wants to do with her life. Why be selective with when to film when apparently the goal of the show is to navigate Jane’s becoming her own person?

Maybe it’s because of the brevity of the series, but there’s an overall blasé quality to everything presented. Jane sails through high school, modeling, and college. The only discussions the family has is in response to Jane’s trans identity, which is fascinating in the year that was 2020: Coronavirus is mentioned, but only as to whether it will impact Jane’s surgery.

One of the more interesting dynamics is between Jane and her 91-year-old grandfather, Gabriel. He talks fervently about his fascination and connection to the moon landing, but more importantly it was his late wife to whom Jane first came out. And while grandfather and granddaughter have a good relationship, there’s no serious discussion about the generational divide. He talks about not wanting to get vaccinated when Covid vaccines drop, but a more significant discussion sees him saying that the people in his day might have shunned Jane… and that’s it.

There certainly need to be more trans stories in media and maybe if “Always Jane” was a full-fledged series, like TLC’s long-running trans reality show “I Am Jazz,” it might have worked better. For all we know, the success of this docuseries could give Jane her own full-fledged series. Again, it continues to play like an audition, a justification for why she should tell her own story instead of giving us anything to see why it’s worth watching. There’s a lot of discussion but not nearly enough action to keep the show compelling. That’s the nature of inspiration porn, the belief that because this character is so brave and inspirational, all that’s needed is for them to exist in order to keep people engaged. And Jane deserves far better than that.