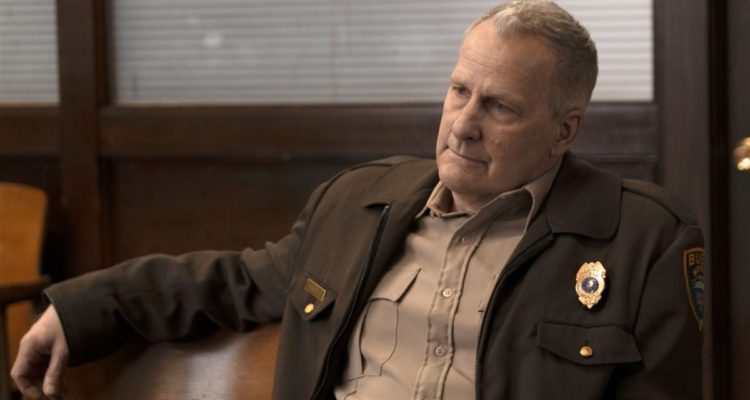 Networks have been serving up a lot of opioid crisis-related programming lately. There are documentaries galore and, on the scripted side, there’s the upcoming Dopesick (Hulu), Painkiller (Netflix), as well as Showtime’s new series American Rust.

An adaptation of first-time author Philipp Meyer’s book of the same name, the nine-episode American Rust stars Jeff Daniels as Chief Del Harris, who’s keeping the peace in the fictional town of Buell in Fayette County, Pennsylvania. Located in the rural southwest of the state, it’s the kind of town that Chief Del likes to clarify to an outsider is closer to West Virginia—and its sensibilities—than that of closest big city, Pittsburgh.

The series transfers over the main characters and basic plots of Meyer’s novel, but writer Dan Futterman (Foxcatcher) wrestles the book’s narrative into more of an ensemble piece that spools outwards from a murder introduced, rather oddly, in the pilot episode.

Following the trend of so many scripted television dramas these days, the series feels the need to open in the “now” of 2015 before jumping back in time a mere six months in order to set up the various players in town, all leading towards the murder. Chief Harris is revealed to be a war vet and a former Pittsburgh detective slowly weaning himself off prescription drugs for pain and PTSD. Grace Poe (Maura Tierney) is a local dressmaker, married to but separated from the town cad, Virgil (Mark Pellegrino). And their son is former football star Billy Poe (Alex Neustaedter), a recent high school graduate floundering about what to do next because of his family’s poverty and lack of opportunity in this financially depressed area.

It’s Billy’s fight with a townie that happens six months prior to the discovered body in the pilot that lays the groundwork for all the messy drama to come. Because Harris is sweet on Billy’s mom, he pulls some favors to get the kid six months of parole. However, the cop who arrests Billy, Novick, happens to be a ne’er-do-well junkie who Harris finally fires on the spot that night because of his extreme behavior. That creates unfinished business between the ex-cop and Billy that eventually results in a bludgeoned body in an abandoned steel mill. Despite only circumstantial evidence, the discovery prompts Harris to protect Billy once more, but the stakes to cover up what Billy might have done are even higher this time.
While the framework sounds like it has all the makings of a twisty murder mystery, American Rust has a maddeningly peculiar way of downplaying just about everything, so there’s no urgency in the three episodes provided to critics. Much like Futterman did with his Foxcatcher script, he’s obviously trying to capture that laconic PA vibe, only this time dialing into any number of sleepy, mostly abandoned towns that make up America’s Rust belt. It gives the tone of this series a less fraught feeling than one might get with a city-centric murder mystery, and it certainly makes the narrative more character-centric, but their daily wanderings can be pretty boring. For example, there’s a wedding for some incidental characters in the second episode that is captured with so much specificity I felt like I was observing it in real time, stuck at a side table desperate to find my moment to shake the couple’s hands and exit gracefully. That’s indicative of a lot of scenes—everything lingers just because it can.

As expected, the show perks up when Daniels or Tierney are given the floor. Each land the small-town authenticity of their middle-aged lovers, who are both carrying around enough baggage to sink even the sturdiest camel. But their meatiest scenes in the early episodes are few and far between. When we get them, they’re great, especially where Del confesses what prompted him to leave the Pittsburgh PD. But outside of those high-water mark moments, we’re stuck with a lot of small-town filler about grumpy invalids, covert union-building at Grace’s dress factory, or quiet bar conversations, all of which roll across the screen like lazy tumbleweeds.
In regards to the more youth-centered stories, Neustaedter acquits himself well as the empathetic Billy, who seems doomed to hold himself back for others only to fall into the vacuums of trouble left open to him. His troubled best friend, Isaac (David Alvarez), also somehow involved in the murder, is saddled with a far more inscrutable and strangely presented subplot about suppressed homosexuality and caregiver fatigue. At one point on a boxcar, he observes a random, graphic gay sex scene that feels entirely out of place with the rest of the storylines in the series, calling into question what we’re supposed to feel or think about him. It’s especially confusing because Alvarez is given so little to say or contextualize with any depth in the first three hours.

As for the case that is supposedly moving the entire narrative, be prepared for it to be investigated in a rather pokey manner. Harris is obviously working both sides of the case, to protect Billy and not look useless to the D.A. in charge, but the proverbial screws aren’t being turned much by hour three. Will the stakes and repercussions ratchet up in the six episodes to come? Maybe? It’s hard to feel compelled to know when the makers of American Rust don’t seem that worried about it, either.