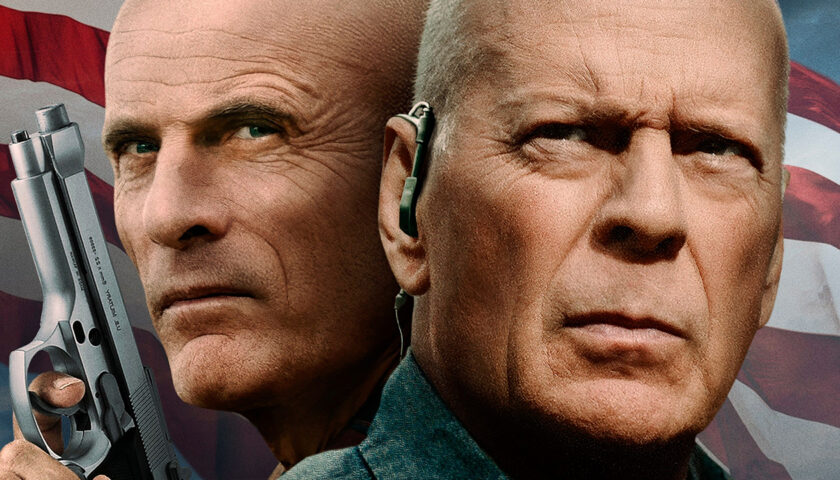 Bruce Willis was once an A-list actor in Hollywood. In recent years he’s been living in the straight-to-video section with a handful of films coming out yearly. Willis currently has 11 movies either in production, or in post for 2022. So, he doesn’t appear to be slowing down. If you’ve seen one of these recent Willis actioners, there is a good chance it was written and/or directed by Edward Drake. Drake’s last four films have starred Willis with more on the way, so it appears they’ve formed quite the VOD team.

“American Siege” is a small-town action romp starring Willis as an ex-NYPD officer-turned-sheriff who will have to deal with a small group of thieves who have taken a doctor hostage in his home. These criminals are searching for answers regarding a missing friend of theirs and this is what the film attempts to center on as its driving plot. It’s all a bit simplistic. Yet when going into a movie like this you should be expecting world class filmmaking. I went in with an open mind, however it didn’t help much in making this storyline, or its character interesting.

Willis does have a moderate amount of screen time, but it doesn’t elevate much as he shares lines with younger actors still learning their craft. The acting was spotty at times with moments of overacting and a terrible southern accent from Willis. But honestly, the material does not give them a ton to work with here. There are a couple spots of slightly intriguing storytelling on display, but there are also many moments that don’t land with the intended impact. It feels like a film built on borrowed elements with nothing of its own to solidify itself on, so it was difficult to devote my attention to it.

It has big guns, shoot-outs, hostage situations, and plenty of characters that look the part for a violent action thriller. Sadly though, none of it gels together into something compelling. The dialogue is often too on the nose. The story layers aren’t developed in an interesting way, and where this film should be able to thrive on a tension-filled pace. It’s too often boring, watered down, and predictable.

Plenty of B-movies have entertained despite their smaller budgets and cast limitations. With a little ambition there is still plenty of fun to be found in a smaller flick like this. But there is too much time spent with characters standing around, which is something that only undercuts the (race against time) scenario that the story spends 90-minutes attempting to craft. If you love Bruce Willis, go watch one of his classics, because unfortunately “American Siege” doesn’t deliver any of the intensity its title would suggest.